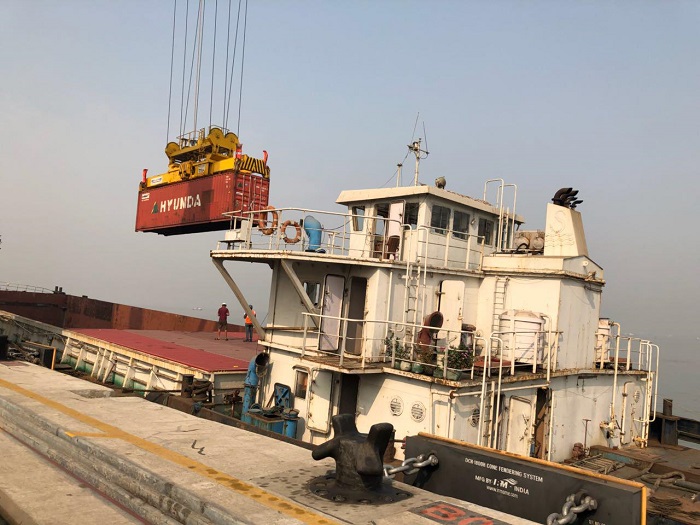 The 2.4 million TEU new concessionaire this month handled two 90 TEU block trains, one destined for Mandideep in Madhya Pradesh on March 13 and the other for Nagpur in Maharashtra on March 16. It also had barge calls for the movement of import cargo to the nearby Mumbai Port, company officials told JOC.com.

Additionally, BMCT received a mixed train loaded with export cargo from Boisar, Maharashtra, along with containers meant for its peers. That is a significant development, as inter-terminal rail transfer was the crux of the issue that led to supply chain complications for the new terminal, which began full-fledged operations Feb. 2.

All of these train runs have been operated in conjunction with state-owned Container Corporation of India, officials told JOC.com.

PSA India said containers meant for other terminals, railed into BMCT, will be transported by truck, over less than 2.5 miles, to connect vessels calling there. Further, BMCT is one of the two terminals in JNPT able to provide container-on barge service, an alternative logistics solution that authorities believe will prove to be an effective, long-term remedy for growing congestion on highway networks connecting the port and city points.

“BMCT is working with all stakeholders to improve connectivity via increased rail and barge utilization; the handling of a train carrying containers for other terminals at JNPT and the barge call is testament to that,” BMCT CEO Suresh Amirapu told JOC.com. “We look forward to continue working closely with all stakeholders for the benefit of JNPT users.”

Amirapu said BMCT aims to process 35 percent of its volume by rail once Indian Railways’ under-construction Dedicated Freight Corridor, linking JNPT with northern hinterland points, to which it is aligned with, is commissioned.

“BMCT is enhancing options for port users. Our state-of-the-art equipment will provide train operators a faster turnaround,” he said.

The terminal features four dedicated railway lines capable of handling 1.5-kilometer [0.9-mile] trains with a loading capacity of 360 TEU. Officials also said on completion of BMCT’s Phase II development by 2022, the terminal will be able to double its rail lift capacity with the addition of four more rail-mounted gantry cranes and three new sidings. As a result, it will have the largest on-dock rail yard in the country.

BMCT currently hosts two weekly calls: the Swahili Express — a five-vessel joint operation between CMA CGM and Emirates Shipping Line in the India-Africa trade — and the Europe-Pakistan-India Consortium 2 under a vessel sharing agreement between Hapag-Lloyd, CMA CGM, and Hamburg Süd.

Besides JNPT, Singapore-based PSA has marine terminal operations at the ports of Chennai, Tuticorin (V.O. Chidambaranar), Kolkata, and Kakinada. Of these, the Chennai and Tuticorin terminals are dominant players for the South India trade, and are said to enjoy productivity edges over their competitors in the region.

A recent JOC.com market analysis showed PSA Chennai represented 21 percent and PSA Tuticorin accounted for 11 percent of the combined 352,461 TEU South India volume during February. A speedier BMCT operation can drive significant growth for PSA in the years ahead, as the northwestern corridor is the main contributor to Indian container trade.