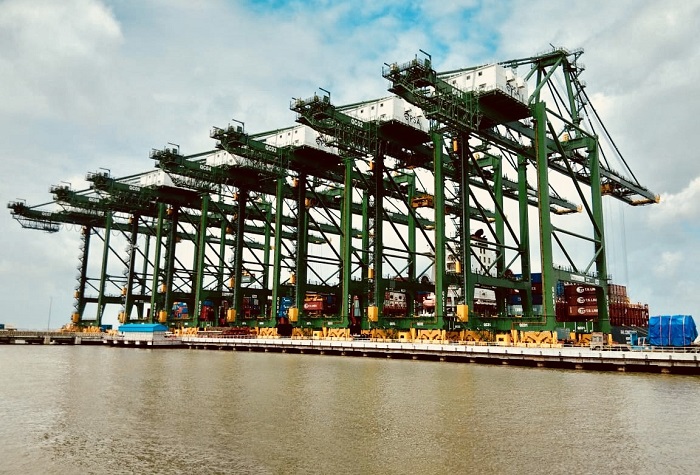 The Xin Hong Kong has been deployed in the Europe-Pakistan-India Consortium 2 (EPIC2) — a vessel-sharing agreement among CMA CGM, Hapag-Lloyd, and Cosco Container Lines. Besides this loop, BMCT currently hosts two weekly services — the Swahili Express (SWAX) operated jointly by CMA CGM and Emirates Shipping Line in the India-Africa trade and the India-Middle East-East Mediterranean (IMED) loop between CMA CGM and Cosco.

“Throughput at BMCT has progressively increased since the start in February 2018,” the Singapore-based operator stated.

As trade demand steadily increases, the company is proceeding on schedule with equipment deployment, with plans under way to add nine rubber-tire gantry (RTGs) cranes in November and three quay cranes in January next year. “This [program] will bring the total number of RTGs and quay cranes at BMCT to 36 and 12, respectively, raising BMCT’s annual capacity to 2.4 million TEU,” the company stated.

PSA has high hopes for BMCT regarding its goal to establish a stronger footprint in the emerging market economy, as the northwestern corridor — to which JNPT essentially caters — is the main contributor to Indian container trade.

JNPT — which includes two DP World facilities and APM Terminals’ Gateway Terminals India — represents the majority of India’s container trade and, hence, BMCT will play a pivotal role in the efficient handling of expected port growth in the years ahead.

How to Improve OTIF: 15 Tips for On Time and In Full Delivery
END_OF_DOCUMENT_TOKEN_TO_BE_REPLACED