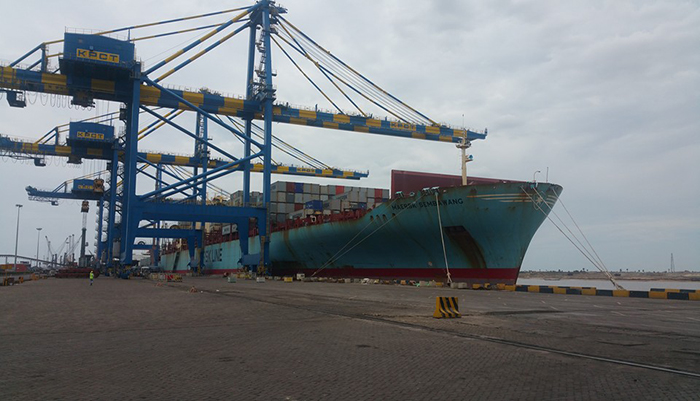 The minor port has worked out a plan with state-owned rail operator Container Corporation of India to launch regular intermodal services connecting Nagpur, a key inland point in Maharashtra, to Krishnapatnam.

They said direct rail connectivity will drastically shorten transit times from Nagpur shippers. It now takes them 25 days to get shipments from China via JNPT. “The transit time can be trimmed to a level of 15 to 18 days via Krishnapatnam.”

They also said imports bound for Nagpur from Yangon, Myanmar, will not need more than 10 days if routed through Krishnapatnam, compared with 12 to 15 days via JNPT.

“Shipping over Krishnapatnam Port Container Terminal can shave off at least one week’s transit time for Nagpur imports and exports when compared to shipping over west coast ports, especially for eastbound cargo,” KPCT Director Vinita Venkatesh said. “Traders, customs house agents, and forwarders in Nagpur are encouraged to extend their licenses and operations to KPCT and benefit from a surge in their business.”

The move follows on the heels of Concor opening a port-side rail yard at Krishnapatnam to support its newly expanded, twice-weekly services to Bangalore.

Seeing the potential, other logistics companies are also investing in container freight stations at Krishnapnatnam. Gateway Distriparks, the country’s largest warehouse service provider, is close to commissioning a 48-acre CFS at the private port.

“Our world-class and technology driven infrastructure further reiterates our claim to offer the most convenient and trade efficient gateway on the eastern periphery of the country,” Krishnapatnam CEO Anil Yendluri told JOC. “The port’s strategic location and its vast hinterland makes it a preferred choice for inter and intra-cargo movements originating from the central and southern parts of India.”

Krishnapatnam is about 112 miles north of Chennai. With a 2,150-foot quay, an 89-acre back-up area, and nearly 5,000 ground slots, Krishnapatnam Container Terminal is capable of handling 1.2 million 20-foot-equivalent units per year. Port statistics compiled by JOC show KPCT’s volume was up 30 percent year-over-year in fiscal year 2015 to 2016, to 119,000 TEUs.

Navigating the Winding Roads This Peak Season & Beyond
END_OF_DOCUMENT_TOKEN_TO_BE_REPLACED