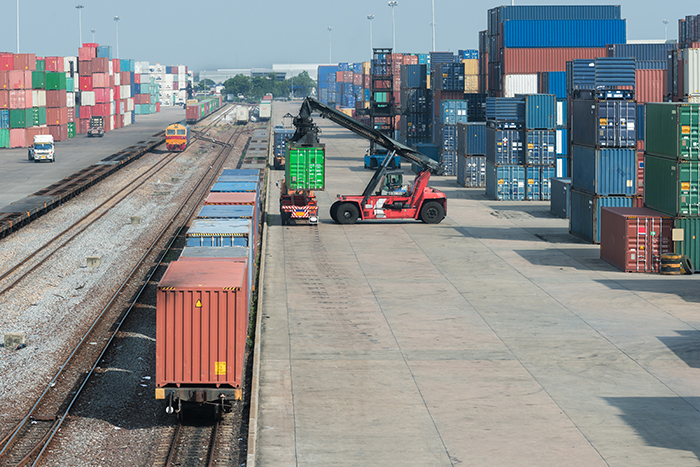 The amount of free storage time for road and rail shipments at India's top port could soon be the same. Photo credit: Shutterstock.com.

JNPT authorities, despite the apprehension of some stakeholders, have reached out to the port regulator Tariff Authority for Major Ports (TAMP) for approval to reset the allotted free period for railed cargo to three days, compared with seven days at present, in order to stay on par with the level for truck traffic.

Citing the views of the government, the public port said in its application to TAMP that rail limitations are creating a ripple effect across the port, and that if intermodal train operators are unable to clear inland containers within three days, other logistics modes should instead be used to avoid backlogs that typically result in long dwell times.

In a public notice, TAMP informed stakeholders that they can file their comments on the port proposal until July 18 and that it will hold a joint hearing July 20, before issuing its final order.

Meanwhile, the Maritime Association of Nationwide Shipping Agencies - India (MANSA), which represents the local ship agents’ community, questioned the wisdom of lowering free times and argued that rail inefficiencies are behind the longer dwell times.

“The port must first address the ground reality and how to bring about much needed realistic and practical service level improvements on the part of the Railways or the train operators, which would bring about conditions of improved dwell time, and which in turn can justify lesser free days,” MANSA said in a letter to TAMP.

The association said free times for railed containers have already been shortened — from the previous 15 days to seven days — and, as such, any further reduction will have significant cost implications for carriers, as currently an average 40 to 50 percent of hinterland cargo is cleared after the seven-day free period — creating extra demurrage charges.

“Thus, it is imperative that the first effort should be to bring down the dwell time to well within seven days, instead of arbitrarily reducing the free days from seven to three and penalizing the shipping lines for the inefficiency of the train operators/railways and terminals,” the agents’ group argued.

Dwell time is the time taken for exports inside terminal gates to be loaded onto a ship and imports onto a truck or train. JNPT's performance on the import front has considerably improved, with shippers’ rapidly growing interest in its direct port delivery program — in which consignees can clear their cargo direct from the wharf within 48 hours of landing at the port.

However, as volume increases, those efforts appear to have slackened in recent months, as new data collected by JOC.com show average dwell times for imports in the April-to-June period lengthened to 2.93 days from 1.87 days a year earlier. For exports, that number was 3.35 days in the first fiscal quarter, compared with 3.5 days previously.

Further, JNPT’s sagging rail traffic — a long-running issue — has become more pronounced, with that share in the same three-month period down to 13.3 percent, from 14.6 percent in fiscal 2017-2018, statistics show.