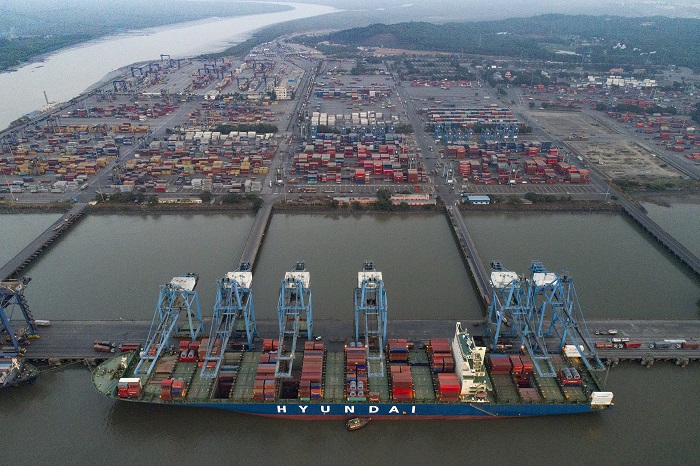 Officials at the meeting concluded that instead of a sudden, sweeping policy change, the port will work toward reducing free times for all "export containers" handled via ICDs to six days from seven days and, depending on the progress, a further reduction will be considered. (Above: Jawaharlal Nehru Port Trust.) Photo credit: JNPT.

Following a stakeholder meeting last week, JNPT agreed to adopt a “phased” approach to implementing uniform free times for freight handled by road and rail, on which it earlier sought approval from the regulator Tariff Authority for Major Ports (TAMP).

Officials at the meeting concluded that instead of a sudden, sweeping policy change, the port will work toward reducing free times for all "export containers" handled via inland container depots (ICDs) to six days from seven days and, depending on the progress, a further reduction will be considered.

Additionally, JNPT will await the recommendations of the Bureau of the Research on Industry and Economic Fundamentals (BRIEF) — a consulting agency hired by India’s Ministry of Shipping — before scaling down the free time allotted for railed imports to three days from the current seven days to stay on par with that for truck cargo.

At the meeting, JNPT officials also suggested stakeholders identify ICD locations where a three-day, free-time program can be rolled out in the first phase.

Dwell time is the time taken for exports inside terminal gates to be loaded onto a ship and imports onto a truck or train.

“The high [rail] dwell time has impacted both the average dwell time of JNPT and India’s ranking in [the] World Bank’s evaluation for trading across the border,” officials stated. “There are frequent complaints from importers who have suffered inventory wash-out.”

According to BRIEF, the clearance of ICD containers generally take twice as long as container freight station (CFS)-bound containers. Railway officials stated that each segment of the supply chain ecosystem —  CFS, ICD, and direct port delivery (DPD) — presents unique challenges and hence, all of these need to be treated differently. They also said besides Railways and Container Corporation of India (Concor), private intermodal rail operators have an equally responsible role in this process.

A representative of the Container Shipping Lines’ Association (CSLA) highlighted the intricacies tied to mixed-train operations, under which rail operators are allowed to carry cargo from multiple terminals and discharge or load containers at one terminal, and said when inventory levels increase as a result of such complex operations, shippers and carriers end up paying extra demurrage charges.

Port officials also expressed concern that despite a surge in yard inventory levels — increasing to 9,000 TEU from an average of 3,000 TEU to 4,000 TEU earlier — train deployments remain unchanged at 12 per day.

JNPT’s chairman said terminals must ensure seamless operations and that they need to adhere to the defined timelines for cargo loading/unloading operations. Further, he drew stakeholder attention to a previous government suggestion that if rail operators are unable to improve their clearance speed, other logistics modes, especially trucking, should instead be used to avoid cargo backlogs.

He also emphasized the need for better coordination among all stakeholders and sought carriers’ comments regarding a suggested stakeholder plan to introduce a "penalty system" for those failing to meet the agreed guidelines.

“Trade is suffering, as accountability is not fixed in the whole process,” JNPT’s chairman said, addressing the meeting.

Authorities at JNPT, which handles the majority of India’s container freight, have been working hard to minimize the delays and their impact on the emerging market economy’s growing export-import trade.