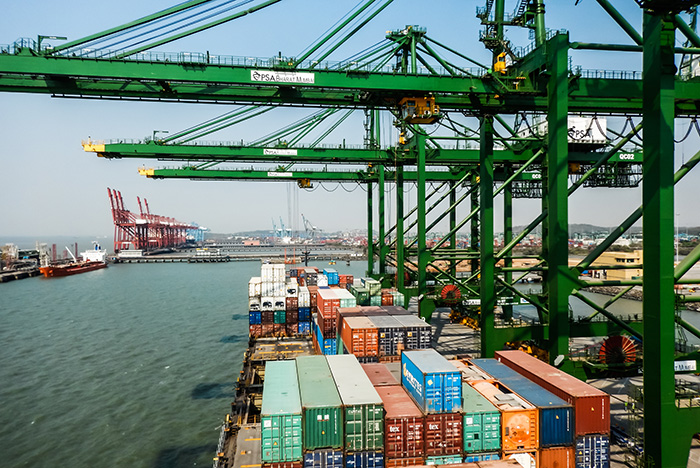 The Singapore-based terminal operator opened Bharat Mumbai Container Terminals (BMCT) in February 2018, with a capacity of 2.4 million TEU annually in its first phase.

With that as a backdrop, BMCT hit a new volume high in January of 67,661 TEU, a 56.4 percent gain from 42,252 TEU in December, according to statistics collected by JOC.com.

Officials at PSA India were not immediately available for comment on the latest performance, but the growth ostensibly came from large-scale liftings on CIX calls. More ad-hoc calls may also have contributed to the upward trend, with BMCT servicing 22 ship calls in January — the highest-ever monthly number — compared with just 11 calls in December, statistics show.

“BMCT, with its advanced technology and infrastructure, is highly capable to accommodate 13,000-TEU vessels, which are a part of HMM’s recent mega vessel project to continuously bring even more bigger sized container vessels to boost the exim [export-import] trade in India,” H.J. Sung, managing director of HMM India, stated when launching the CIX call at BMCT.

New berthing data obtained by JOC.com also suggest other carriers and alliances operating to and from JNPT are poised to deploy some ad-hoc calls at BMCT this month, including the CMA CGM Norma and the Xin Fei Zhou — arriving Feb. 10 and Feb. 17, respectively. Both vessels are part of the CI-1 (China-India) loop operated jointly by Cosco Shipping Lines, CMA CGM subsidiary APL, and OOCL.

January rail movement and transshipment figures also bode well for the new terminal. BMCT handled 7,680 TEU by train (2,991 export TEU and 4,689 import TEU), compared with 5,112 TEU (2,344 export TEU and 2,768 import TEU) in the prior month, while January transshipment volume increased to 3,428 TEU, from 2,262 TEU in December, according to the collected data.

That increase in rail volume is particularly noteworthy, as inter-terminal rail operations have been the subject of stakeholder disputes and anti-trust investigations at JNPT. The Competition Commission of India (CCI) last month upheld PSA’s concerns regarding rail-handling problems and ordered other stakeholders — such as DP World and APM Terminals, both of which also operate terminals at JNPT — to cease and desist from anti-competitive practices that harm trade development. The intra-port squabble arose when APM Terminals Mumbai and DP World Nhava Sheva declined to work with BMCT on mixed/combined train operations, citing various operational and customs-related problems, and sought to collect additional charges from BMCT shippers for such services.

Under the inter-terminal program, rail operators can transport inland container depot (ICD) goods booked by multiple terminals and discharge or load all containers at one terminal. With existing infrastructure limitations at the port, much of rail movement to and from JNPT is handled via mixed/combined trains and, as such, the dispute has put a crimp on BMCT’s ICD volume reach. As an interim measure, BMCT has deployed trucks to transfer such containers at no extra charge to customers.

Notwithstanding the CCI ruling, these logistics complications are likely to persist, as other stakeholders appear determined to appeal the case to higher courts. An effective, long-term solution will essentially hinge on when BMCT is able to run regular dedicated trains through its on-dock intermodal systems, which are yet to start full-fledged operations. Currently, dedicated trains run to and from BMCT at sporadic intervals.