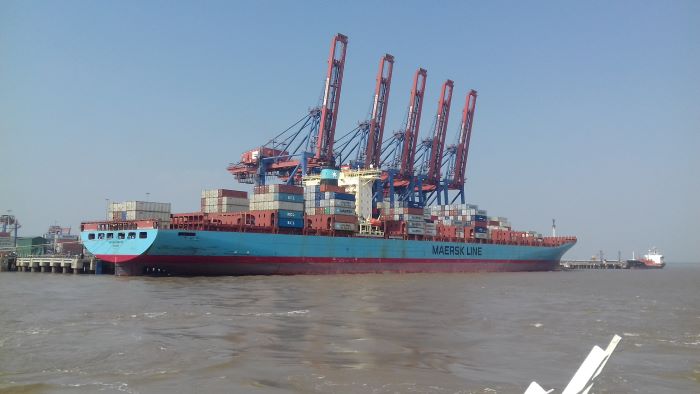 The Indian government has been working hard to transform some of its key domestic ports into regional hubs to discourage foreign transshipment, but there is one major obstacle standing in the way: port charges for mainline ship calls.

The country’s main industry body, the Associated Chambers of Commerce and Industry of India (Assocham), in a paper filed in June with the Ministry of Shipping, said high port tariffs make Indian ports uncompetitive compared to global peers in their bid to attract more large-size direct calls, which was the primary reason for the abolition of restrictive cabotage rules in May 2018.

Indian terminals are also costlier compared with their foreign counterparts when it comes to cargo-related rates; those charges typically cover stevedoring, wharfage, and demurrage.

The cost of a port call is generally dependent on the amount of containers, loaded and discharged, that the ship handled at the terminal.

Assocham’s report, a follow-up to a recent session with industry in New Delhi, indicates cost differences are much heftier for newer terminals at JNPT and privately operated Mundra Port. For example, on a call with 2,500 container moves, DP World-operated Nhava Sheva (India) Gateway Terminal (NSIGT) and PSA International’s Bharat Mumbai Container Terminals (BMCT) at JNPT cost $108,437 for marine services and $210,700 for container handling fees, which translate the unit cost per container move to $127.65 on average, according to the analysis.

Despite being non-government, minor entities with unregulated tariffs, Adani Group’s Mundra and APM Terminals’ Pipavav Port are as expensive as BMCT and NSIGT at JNPT. The study puts Mundra’s vessel-related charges at $104,604 and container-related fees at $241,244, resulting in a unit cost of $138.34 per move, whereas Pipavav stands at $75,371 and $241,395, respectively, at a cost of $126.71 per move.

However, older terminals at JNPT — such as the state-owned terminal, APM Terminals’ Gateway Terminals India (GTI), and DP World-run Nhava Sheva International Container Terminal (NSICT) — are relatively better off on the cost front, at $90.81 per move, but face capacity and productivity issues.

Mundra is farther up the west coast, about 300 nautical miles from rival JNPT. Although port costs are high, the allure of greater cargo potential and closer proximity to the vast northwestern hinterland market, combined with other infrastructure edges such as quicker turn times, make Mundra an attractive port of call for mainline carriers in trades to and from India.

On the other hand, terminals at India’s major public ports operate under a regulated tariff regime, administered by the Tariff Authority for Major Ports (TAMP), and, as such, lack the freedom to adjust their service rates dependent on demand. In addition, JNPT had serious capacity issues until BMCT opened early last year, a 4.8 million TEU addition in two phases that can fend off any further loss of cargo to private competitors in the region.

Transshipment has long been a problem

Transshipment has long been a costly thorn in the side of Indian stakeholders working to position domestic exporters and importers on a more competitive footing globally. The modified cabotage program, under which foreign-flag carriers can transport laden export-import containers for transshipment and empty containers for re-positioning between Indian ports without restrictions, is meant to address that issue.

Although that effort has yielded some positive results, with carriers claiming incremental domestic transshipment gains, the latest analysis corroborates another industry view that liberalized cabotage rules alone will not remedy a long-running transshipment phenomenon that has its roots in several other factors — particularly competitive pricing and terminal efficiency.

“Overall, [the relaxation of cabotage] has been a positive move and we expect it to drive growth of coastal shipping and transshipment at Indian ports,” DP World Subcontinent told JOC.com. “To attract the next generation deep draft vessels, additional steps need to be taken such as competitive marine charges, as other hubs like Colombo enjoy pricing flexibility and offer more competitive rates compared to Indian ports.

“Along with this, a move towards a market-determined tariff, investment in state-of-the-art technology, and maintaining deeper drafts are among other measures that will boost the sector to make it more attractive and support India’s trade growth,” it added.

DP World operates a full-fledged transshipment facility at Cochin port, known as the International Container Transhipment Terminal (ICTT), or Vallarpadam Terminal, which is pinning much of its hopes on recapturing Indian cargo transshipped via Colombo.

Assocham, in a previous study, highlighted that shipping a container from India can cost nearly double what it costs to ship the same container from China, creating a disadvantage for Indian goods in the global market.

The Indian government has moved to address many of the challenges domestic ports face in competing with international rivals. The Sagar Mala program rolled out in 2015 is investing approximately $180 billion in a long-term effort to interlink ports through the development of seamless road, rail, and seaway connections.

Aided by those investments, as well as digitization and pro-trade reforms, productivity at Indian ports has seen a marked improvement in recent years. A recent JOC.com analysis showed the average vessel turnaround time at the country’s major state-owned ports in fiscal 2018-2019 slid to 59.85 hours, from 64.43 hours the prior year.

India’s import and export costs currently constitute 14 to 18 percent of its GDP; the government wants to bring that figure down to 9 to 10 percent by 2022 — on par with some of the more advanced economies.