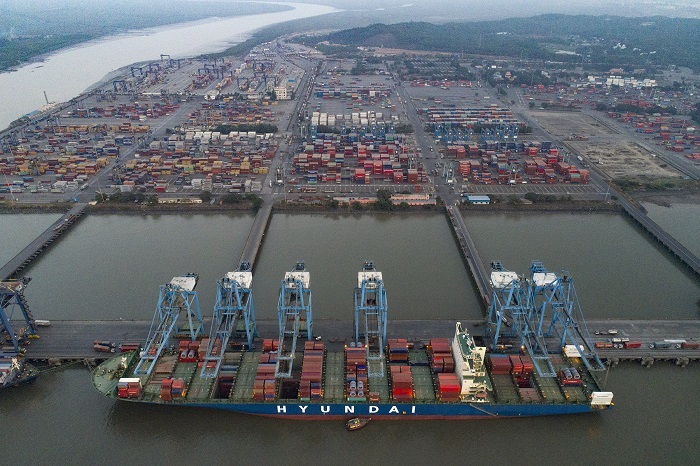 The investment is a part of a strong push by DP World to diversify beyond its core container cargo handling business with more investment in assets that link the global terminal operator directly with shippers and logistics service providers. (Above: Jawaharlal Nehru Port Trust [JNPT] in Mumbai.) Photo credit: JNPT.

The investment is a part of a strong push by DP World to diversify beyond its core container cargo handling business with more investment in assets that link the global terminal operator directly with beneficial cargo owners (BCOs) and logistics service providers.

“We look to extend our core business to lay a wider role in the global supply chain and connect directly with cargo owners and aggregators of demand, ultimately improving the quality of our earnings and driving returns,” DP World chairman and CEO Sultan Ahmed Bin Sulayem told JOC.com.

Bin Sulayem said DP World will continue to invest in terminal assets and plans capital spending of up to $1.4 billion this year, including investment in a Prince Rupert expansion in Canada, as well as greenfield projects in Ecuador and the Democratic Republic of Congo. However, the list of recent large deals by the company points clearly to a rapidly evolving business model focused on building connectivity for shippers in major emerging markets.

The $78 million JNPT investment is the second by the Dubai-based company’s India JV that earlier purchased a 90 percent stake in India’s Continental Warehousing Corporation, which owns 12 million square feet of logistics infrastructure in 70 locations across the subcontinent.

Last year, DP World set up a $3 billion investment platform in partnership with the government of India to support investment in supply chain activities beyond port and terminal infrastructure, including freight corridors, special economic zones, inland container terminals, and logistics infrastructure such as cold storage.

“There is a great need to reach internal markets in India and for investment in cold storage facilities and networks — using coastal and inland waterways to increase efficiencies and lower costs,” said Bin Sulayem.

South America is another focus for the company, which recently acquired Cosmos Agencia Maritima, a major provider of warehousing, distribution, and cargo handling services that connect inland cargo sources with port facilities in Peru.

The chronic failings of inland supply chain infrastructure across the continent of Africa also make it a major ongoing investment destination for DP World.

After developing a logistics center in Kigali to improve connectivity for shipments to and from landlocked Rwanda, the company is developing a similar hub in Mali on the western side of Africa, the first phase of which will be open by 2020.

“One of the aims for these nations is to move from being landlocked to land-linked. Mali has a sizeable population, but as a landlocked country it needs access to maritime gateways on the west coast of Africa and to create its own trade infrastructure so that it can tap into intraregional trade across the continent,” said Bin Sulayem.

Getting closer to cargo sources and BCO customers was a key driver behind the recent acquisition of Denmark’s Unifeeder.

“The ever-growing deployment of ultra-large container vessels [mega-ships] has made high-quality connectivity from hub terminals crucial for shipping lines and cargo owners. Unifeeder is a unique platform for logistics solutions that is independent of access to specific ports.”

Bin Sulayem said he was not overly concerned about the impact of rapidly rising levels of investment in ports and trade zones in neighboring countries and the wider Middle East on the business of its home base of Jebel Ali.

"We believe the regional port expansion plans will be complimentary in nature and not competitive, given the need for more logistical capacity to support the economic development taking place in countries like the UAE [United Arab Emirates], Saudi Arabia, and Iraq.”

Jebel Ali port handled 7.7 million TEU in the first half of the year, or essentially flat volume, year over year. In a move to strengthen the appeal of the port and Dubai to traders, a large international traders market is being built next to the Dubai Expo 2020 site. Via a partnership with the Zhejiang China Commodities City Group, the market will be open to traders from all over the world and include goods ranging from household goods to building materials, food and beverage, energy and power, and engineering and technology.