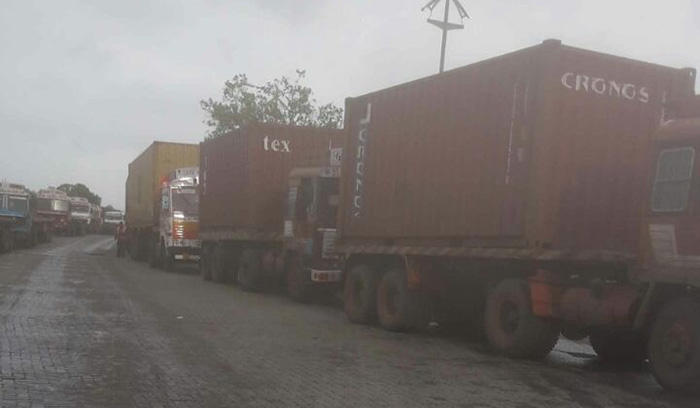 Trucks line up to enter Jawaharlal Nehru Port Trust as its busiest terminal copes with the impacts of the cyberattack.

“While we are working on a solution, we do not have an update on expected resumption of services,” Gateway Terminals India, or APMT Mumbai, said in its latest advisory to customers.

The company said terminal gates continue to remain closed to all export traffic, but efforts are underway to restart the release of import cargo through manual processes.

“Traffic movement is being monitored by dedicated teams and trade is requested to keep trucks off the roads to avoid congestion,” the notice stated.

The company previously told truckers and container freight station services providers in the harbor to temporarily halt container movements to the terminal.

APMT Mumbai, which loads roughly 40 percent of the containers passing through JNPT, did not return JOC.com’s requests for updates Thursday.

The Ministry of Shipping on Thursday said National Cyber Security Coordinator Gulshan Rai is marshalling forces in the port to help the private terminal restore operations. “The IT [information technology] team of AP Moller-Maersk together with IT companies in the country are working to restore the IT infrastructure at the earliest and resume cargo operations, but restoration of their infrastructure is linked with restoration of their global IT systems.”

The statement also said additional parking space for trucks has been allocated to avoid traffic snarls, and that authorities are coordinating with the other terminals operated by JNPT and DP World to accommodate vessels impacted by the APMT closure.

Thanks to that government intervention and proactive measures to regulate truck flows, landside congestion at JNPT has not so far reached crisis proportions such as during past labor troubles tied to outsourced rubber-tire gantry crane operations at private terminals, local shipping sources told JOC.com.

In the meantime, the Maersk Group in a global press release maintained that the impacts of system outages have been contained and that it is working toward technical recovery.

“We are collaborating with IT experts, including national cyber-crime agencies and IT industry leaders, to reinstate services safely and without further disruption. All Maersk Line vessels continue to be under control, employees are safe, and communication to crew and management on-board is functioning,” the statement said.

Still, the disruption is a major setback for JNPT as customs authorities there have been vigorously working to further accelerate direct port delivery shipments as part of a larger government program to reduce logistics costs with dwell time reductions.

Separately, APMT told JOC.com that its Pipavav terminal is operational, but at a slower pace. “This [cyber] attack has not had any major impact on the company at this point in time.”

APMT Inland Services’ warehousing infrastructure at JNPT and Dadri, near Delhi, have also been affected by the systems collapse.