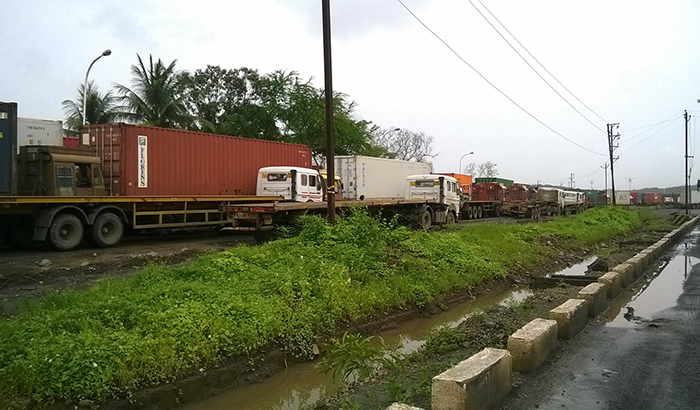 Truck lines into Jawaharlal Nehru Port Trust are much shorter than at the start of the week.

APM Terminals Mumbai, or Gateway Terminals India, told JOC.com that operational complications that have arisen from recent monsoon storms are rapidly easing and the terminal is close to operating at normal speed.

“Challenging weather conditions during the month have contributed to delays at berth. This has caused temporary bunching of tractor-trailers getting into the terminal. We are working with all concerned stakeholders to ensure timely evacuation of containers to ease the congestion,” the company said.

That statement comes in the wake of trade updates that truck queues outside the largest terminal at Jawaharlal Nehru Port Trust were lengthening and containers piling up, but a company official told JOC.com that gate in-and-out times for trucks have substantially improved and that yard occupancy is no more than the normal average.

“There is much less traffic outside the gates now,” the official said. “The tractor-trailer wait time at the gate has already eased up to regular levels by late afternoon today [Friday].”

Local shipping sources also told JOC.com that truck lines leading to the terminal that stretched more than a mile have now shortened considerably.

The APMT official also said a likely decision by the India-Mediterranean consortium, comprising CMA CGM, Cosco Container Lines and APL, to blank one of the vessels scheduled to call GTI in the coming days — apparently for tonnage upsizing with a new vessel — could also take some pressure of the terminal.

“We are essentially fighting an issue that is a typical sight during the monsoon season,” the official said.

APMT Mumbai is looking to build on a 14.5 percent volume increase it had in the April-June quarter in the coming months on the back of new services that have begun weekly calls at the terminal during the month.

Nearly half of India’s containerized trade moves through JNPT, so any disruption there could have major repercussions throughout the emerging economy.