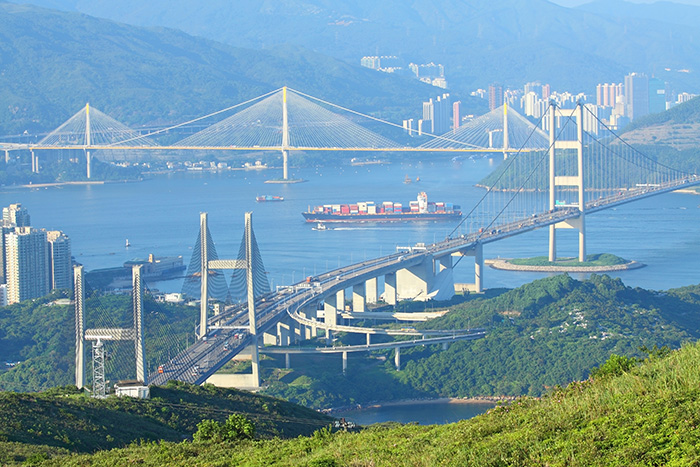 The challenge air draft restrictions pose for mega-ships passing under Hong Kong’s Tsing Ma Bridge will become more pronounced as vessels grow larger in size, according to the head of a major terminal operator.

“Safety always comes first but my understanding is the Hong Kong government is taking a conservative view with its height calculations. If it is overly conservative, then it needs to be looked at,” Peter Levesque, CEO of Modern Terminals, which has facilities in Hong Kong and western Shenzhen, told JOC.com

A report commissioned by the Hong Kong Liner Shipping Association found the current air draft restriction of 53 meters (173.9 feet) for the iconic Tsing Ma Bridge is impacting calls by mega-ships to the Shenzhen and Hong Kong port cluster. The restriction causes problems for vessels of more than 10,000 TEU and serious transit challenges for 18,000-TEU vessels.

The study found the bridge is significantly higher than the official design height on which the current air draft clearance is based. The actual height of the bridge ranges from 65.8 meters at the edges to 70.2 meters in the middle, which is 3 meters higher than the design value at the edges and 8.1 meters higher in the middle of the span, the study says.

“Anything that puts restrictions on the largest vessels coming into Hong Kong impacts Hong Kong’s competitiveness, whether ships are going on to west Shenzhen or Yantian,” Levesque said.

He stressed the importance of the port of Hong Kong as an employer and key contributor to the economy and said he is confident the government will do more to support the competitiveness of the port.

“Over the past year and a half we have seen progress towards a better understanding of the issues related to the port on the part of the government. There has been more attention on these issues, and we are hoping that more land will be made available for use in the near-term.”

Modern Terminals handles around one-third of the total container throughput of the port of Hong Kong and has performed well over the past year with consecutive monthly increases in volumes. Levesque put the performance down to work on the commercial side including incentives for customers to grow volumes as well as efficiency improvements in part owing to a new terminal operating system.

But he said the company faces similar challenges to other terminal operators in terms of pressure from customers to reduce rates as a result of increasing consolidation and greater requirements for heavy capital investments for infrastructure able to support larger vessels.

“The need to spend on infrastructure in order to support larger vessels, coinciding with rate pressure from alliance joint procurement has made things difficult over the past year.”

The resetting of the alliances in April is impacting terminals in other ways, too. Although Hong Kong has not experienced the kind of disruption and congestion that has plagued Shanghai in recent weeks, there are what Levesque calls some anomalies with the new structures that need to be addressed.

Crossover due to the way vessels are deployed as part of their new alliance groupings has created inefficiencies in the area of inter-terminal transfer (ITT), he said.

“We’re moving thousands of containers from terminal to terminal and berth to berth to meet alliance requirements. A more innovative approach to ITT would be a good opportunity to provide carriers with greater efficiency and value.”

Levesque said he is “cautiously optimistic” on the outlook for terminal volumes.

“We’re expecting growth of 2% to 3% globally and see no indication of that falling off yet. Our primary concern at the beginning of the year was the potential for issues between the Trump administration and China that could impact trade, but those seem to have gone away, at least for now.”

Modern Terminals is not looking to make any acquisitions or undertake any major new business ventures at the moment and is focused on completing infrastructure development underway in Hong Kong and growing its Dachan Bay unit in Shenzhen.

The company is forecasting throughput at the Shenzhen terminal to reach around 1.365 million TEU this year, compared with around 1.3 million TEU in 2016.

“The growth rate has not been as good as we had hoped for at Dachan Bay, but as utilization rates of the other West Shenzhen terminals increase, DaChan Bay is in a good position to capture market growth in the years ahead.”

Parcel vs. LTL: Managing Big and Bulky Shipments Without Breaking the Bank
Global Shipping Outlook: What Will 2022 Hold?
Port Performance North America: When Will the Bottlenecks Ease?
END_OF_DOCUMENT_TOKEN_TO_BE_REPLACED