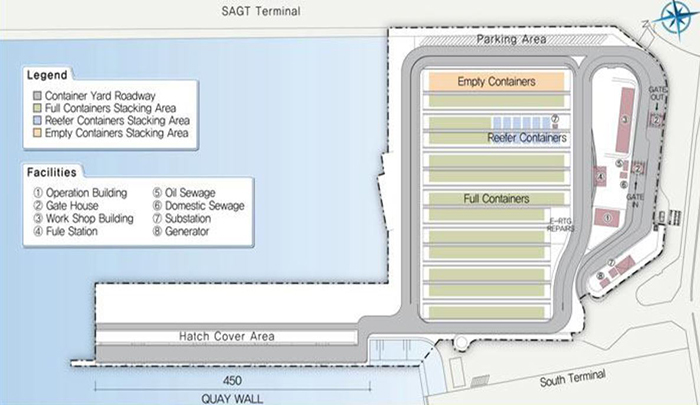 A layout of the East Container Terminal in Colombo, the future of which is now mired in uncertainty.

The selection of a private partner to build and operate a new container terminal in Colombo is in limbo amid indications that the existing tender process may be canceled.

Ports minister Arjuna Ranatunga is proposing an end to the tender process for the planned East Container Terminal, or ECT, a key project in plans to build on the considerable success of the port of Colombo as a deep-sea transshipment hub.

One of the government committees overseeing the project is also seeking to introduce new conditions to the tender process that would effectively disqualify the five international consortia and two single bidders that have already submitted expressions of interest.

“They are not at all clear about how they want to proceed and there are many different internal views on that. It looks like there are members of the government that want the terminal to be fully operated and owned by [the state],” a source with one of the international companies that submitted an expression of interest told JOC.com.

The new conditions disqualify bids from operators already engaged in the port of Colombo, as well as firms that are already invested in competing terminal operations in the region. They disqualify foreign government entities from the bidding process and require that the main firm of any consortium interested in the project has experience in terminal operations and that the secondary firm has experience in port management.

“The new conditions would exclude everybody from bidding for the work,” said the source.

Under the original schedule, the full tender process for the development of the terminal was to be completed by early 2017.

The ECT is being developed to support Colombo’s target of doubling container throughput to more than 10 million twenty-foot-equivalent units by 2025. The terminal is to initially add 2.4 million TEUs in capacity.

The project requires operating an existing 440-meter (1,443-foot) berth as well as development of an additional 760-meter berth on a 35-year build-operate-transfer deal. Under the original conditions, the Sri Lanka Ports Authority is to hold a 51 percent stake in the operating joint venture.

The existing Colombo International Container Terminals, or CICT, is enjoying rapid growth as a regional transshipment hub. CICT is a joint venture between China Merchants Holdings and the ports authority. China Merchants has an 85 percent stake in the 2.4 million TEU terminal and has invested $500 million in the facility.

“With increased use of larger vessels in the South Asian transshipment market, development of additional deep water berths is urgently needed to retain Colombo Port’s competitive position,” Chaorin Shim of the Asian Development Bank, which is advising the government on the project, said earlier in the year.

The government of Sri Lanka confirmed last week it signed a pre-agreement with China Merchants Port Holdings to buy an 80 percent stake in the South Asian country’s Hambantota deep-sea port.

Hambantota is located about 250 kilometers southeast of Colombo and the Export-Import Bank of China provided a loan of over $1 billion dollars for the port project, which is being constructed by China Communications Construction Co.

“It is a genuine task aimed at sustainable economic development of the country. It is not an attempt to sell the Hambantota Port to a foreign country or a betrayal of the country, as some allege,” government minister Malik Samarawickrama said in a statement confirming the deal.