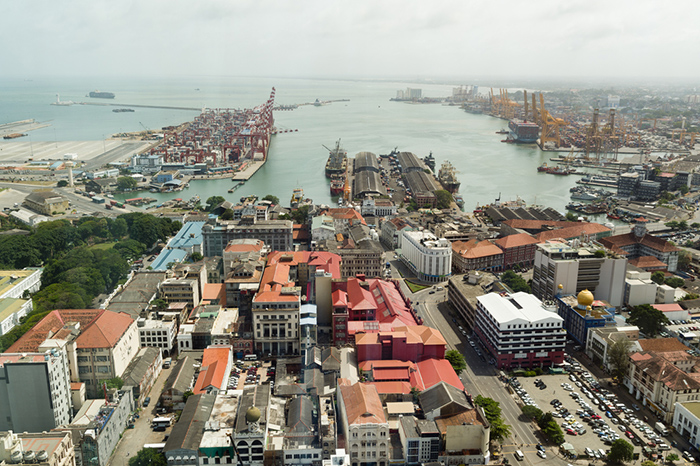 The Port of Colombo, pictured, has emerged as a leading international transshipment hub in recent years and is adding capacity to keep up with demand.

Indian shippers appear less keen to rely on the Port of Colombo in Sri Lanka for their international transshipment as the government prepares to break ground on a new deep-sea port at Enayam, in Tamil Nadu state, to rival South Asia’s top transshipment hub.

Although a majority of India’s east coast gateway cargo continues to move via foreign ports at heavy extra costs to shippers, new provisional data collected by JOC.com, part of IHS Markit, shows Indian demand for transshipment at Colombo is slowing. New Delhi is pinning its hopes on port projects at Enayam and Vizhinjam to recapture domestic cargo transshipped via Colombo and other foreign hubs to cut Indian shipping costs. Both sites are close to the main east-west international shipping routes, and have deep-water depths that can accommodate the latest generation of mega-ships.

Statistics show fiscal year 2015 to 2016 volume of transshipped containers moving through Colombo for India's major, or public, ports stayed flat with the prior year, at 1.19 million twenty-foot-equivalent units, even as India's transshipment volumes during the same period increased 14 percent year-over-year to 2.84 million TEUs from 2.49 million TEUs.

Transshipment represented nearly 35 percent of total throughput at major ports, or 8.2 million TEUs in fiscal 2015 to 2016, compared with 31 percent out of 8 million TEUs previously.

Still, Colombo had the largest share of the Indian transshipment pie last fiscal year, accounting for 42 percent, compared with 48 percent in fiscal 2014 to 2015, the analysis reveals. Singapore was the second-largest gateway for cargo transshipped to and from India, with a 17 percent share, followed by Port Klang, Malaysia, at 8 percent.

At the same time, domestic transshippment volume, or coastal cargo, handled at India’s major ports jumped 82 percent year-over-year to 710,000 TEUs in fiscal 2015 to 2016 from 390,000 TEUs last fiscal year, data shows. That strong growth could be a result of the lifting of cabotage restrictions for foreign-flag carriers, coupled with other incentives, including lower port tariffs.

DP World-operated International Container Transshipment Terminal, or Vallarpadam Terminal, at Cochin, touted as India’s only dedicated transshipment facility at present, seems to have benefited from those changes. The newest traffic figures released by DP World Cochin shows ICTT has recorded a 22 percent year-over-year increase in volumes during 2016, versus an 8 percent rise in the prior year.

Further, the number of ship calls at ICTT increased to 730 from 599 in 2015 thanks to new service additions.

The company also said ICTT has lifted productivity levels to more than 30 moves per hour per crane, and reduced average truck turn times to 25 minutes, enabling the terminal to consistently handle 40,000 TEUs per month.

“This achievement is a combination of factors which has made ICTT the most productive container terminal in south India — an accolade achieved in spite of a year that continued to be a tough one for the industry,” DP World Cochin CEO Jibu Itty told JOC.com.

The first phase of ICTT includes 1,969 feet of quay, a draft of 48 feet, 99 acres of backup area, four ship-to-shore cranes, 15 rubber-tire gantry cranes, three reach stackers, and two on-dock rail-sidings. It is capable of handling 1 million TEUs annually and has been designed so it can be expanded to 4 million TEUs per year.

As ICTT hits its stride, Adani Ports and Special Economic Zone is building the Rs. 7,500 crore (approximately $1.1 billion) Vizhinjam project, the initial phase of which is designed to handle 1.8 million TEUs per year and is expected to open in 2019.

Elsewhere, a three-phase development at Enayam is estimated to cost roughly Rs. 27,500 crore. Indian authorities are looking to open the Rs. 6,575 crore first phase with a total annual capacity of 1.6 million TEUs by 2020. That phase will include two berths that each have a 400-meter (1,312 feet) quay. When complete, Enayam’s capacity will reach 6.7 million TEUs per year.

The success of Enayam is key to New Delhi’s long-term program to reduce logistics costs to 10 percent of its GDP from between 14 and 18 percent currently.

“At present, there are only a few ports in India that have sufficient draft and can match global cargo handling efficiencies,” a recent government statement said. “Indian port industry loses out up to Rs. 1,500 crore of revenues each year.”

As Colombo relies heavily on Indian transshipment cargo for growth, it must keep an eye on traffic trends regarding Indian shippers, particularly as the port continues to work to add capacity.