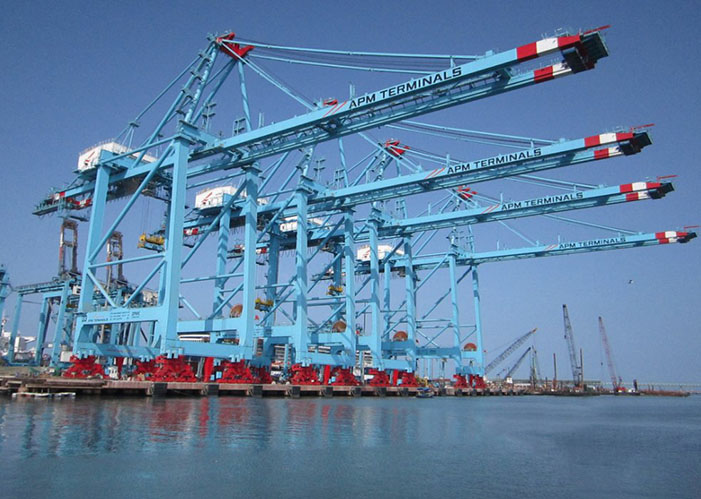 Transshipment at Colombo has made up more than 75 percent of its overall volumes for the last two years.

APM Terminals and Maersk Line have joined a consortium that is bidding to develop a new container terminal in Colombo, one of the world’s fastest-growing container ports.

The Danish companies’ partners are Container Corporation of India and John Keells Holdings, a Sri Lankan hotels-to-transport conglomerate. The joint effort by the Maersk Group subsidiaries comes about a month after the group split itself into two different units: Transport & Logistics and Energy. Maersk Line, APM Terminals, Damco Spitzer, and Maersk Container Industry will make up Transport & Logistics, while Energy will consist of Maersk Oil, Maersk Drilling, Maersk Tankers, and Maersk Supply Services.

APMT did not reveal its share in the consortium that is bidding to develop East Container Terminal in a project reportedly worth around $400 million.

Colombo was the third-fastest growing top 30 container port in the first half of the year, with traffic increasing 11.2 percent to 2.79 million 20-foot-equivalent units, according to industry analyst Alphaliner. The port was No. 28 on the JOC’s Top 50 Global Container Ports in 2015 when it handled 5.19 million TEUs, an increase of 5.7 percent.

The fastest-growing port was Algeciras in southern Spain, which increased traffic by 13.1 percent to 2.35 million TEUs followed by Malaysia’s Port Klang, which was up 12.3 percent at 4.68 million TEUs.

The Sri Lankan government has said it is looking for a consortium that includes a company from the Indian Subcontinent in a move seen as a counterbalance to growing Chinese influence in the port.

“We don’t specifically say India. But we need to understand that up to 65 percent of our cargoes go to India and 72 percent to the subcontinent,” ports minister Arjuna Ranatunga said on the eve of the bidding deadline at the end of August.

“Even Chinese companies have to form a consortium with a minimum 20 percent stake from a subcontinent company. It can’t be a Sri Lankan company. But it could be either a Pakistan or Bangladesh company.”

The new terminal, in which the state-owned Sri Lanka Ports Authority will have a 15 percent stake, will have three, 400-meter (1,312 feet) berths and an annual capacity of 2.4 million TEUs.

China Merchant Holdings secured a 35 year concession in 2012 to operate the Colombo International Container Terminal. Traffic at the port’s largest terminal in the first eight months of 2016 has increased 30.2 percent from the corresponding period last year to 1.29 million TEUs.

Most of Colombo’s traffic — around three quarters — is transshipment.