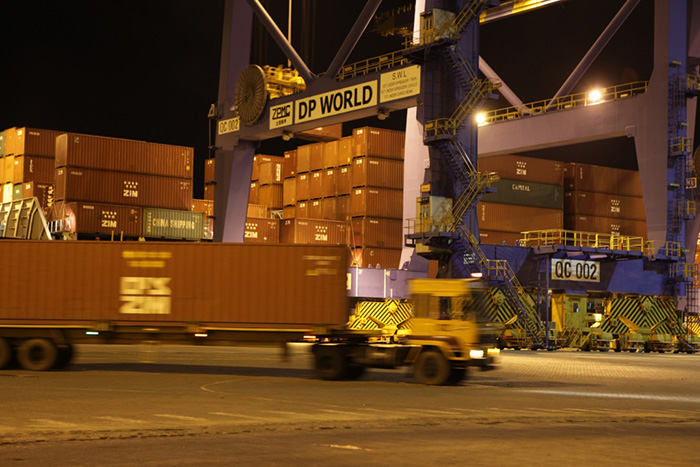 A cabotage law change that India enacted in May 2018 is beginning to bear more fruit for DP World’s International Container Transshipment Terminal (ICTT) at Cochin, which has thus far fallen short of its mainstay transshipment business.

ICTT, also known as the Vallarpadam Terminal, opened in early 2011 with a capacity of 1 million TEU annually in its first phase. Given the site’s close proximity to busy east-west international shipping routes, the project was essentially designed to recapture Indian cargo transshipped via the port of Colombo, Sri Lanka, and similar ports in the region.

Following the reform of India’s cabotage law, which previously prevented foreign-flag ship operators from transporting containers between domestic ports, transshipment freight handling at ICTT has been trending up, culminating in a record-setting January. The terminal handled 55,593 TEU for the month, its highest-ever monthly throughput and an 8 percent increase from January 2018, according to a JOC.com data analysis. More notably, January transshipment volume soared 45.2 percent month over month and 4.5 percent year over year to 4,046 TEU.

A new weekly coastal service launched by Container Corporation of India (Concor) at Cochin on Jan. 15 may also have aided this increase. The full rotation of this shortsea loop is Kandla, Mangalore, Cochin, Tuticorin, and back to Kandla with an average capacity of 1,400 TEU on a round-trip basis.

“Presently, the terminal boasts connectivity to Australia, (the) Far East, Southeast Asia, (the) Middle East, Europe and (the) Mediterranean. With the close proximity of six hours to the hinterland, fast turnaround and increase in the cargo destined for the Far East and the US market, the terminal is poised to strengthen its connectivity with a direct service in its portfolio,” the company said in an email to JOC.com.

Thanks to the liberalized cabotage program, foreign carriers are now free to transport laden export-import containers for transshipment and empty containers for repositioning between Indian ports without any specific permission or license. In the past, this business was exclusively controlled by Indian-registered cargo ships with limited — often inadequate — tonnage capacity.

That said, high port-vessel-related charges and a lack of sufficient gateway cargo remain a deterrent to many mainline carriers looking to offer regular calls at Cochin.

DP World invested about Rs. 1,600 crore (about $226 million) in the first phase of berth development, with the landlord port spending more than Rs. 1,700 crore, in stages, toward dredging works. ICTT currently features 1,969 feet of quay, a draft of 48 feet, 109 acres of backup area, four quay cranes, 15 rubber-tire gantry cranes, three reach stackers, and two on-dock intermodal rail-sidings. The concession contract calls for a three-phase development, with work on the second phase slotted to begin when annual volume levels reach 1 million TEU. At full build-out, the project is expected to provide a quay line of 1,800 meters (about 5,905 feet), 18 quay cranes, 54 gantry cranes, and an annual capacity of 4 million TEU.

A previous study by global port design and consulting firm AECOM found that terminal handling charges and vessel-related costs at Cochin were roughly 30 percent higher than those at Colombo. The agency also stated that Colombo was offering volume-based incentives to carriers.

Terminals at India’s major public ports operate under a regulated tariff regime, administered by the Tariff Authority for Major Ports (TAMP), and, as such, lack the freedom to adjust their service rates dependent on demand.

To alleviate those cost disadvantages, Cochin now has in place a package of tariff incentives -- including vessel-related fee rebates of up to 85 percent for new regular calls and up to 70 percent for ad-hoc calls -- for mainline operators on certain trade lanes, particularly into the US East Coast.

That push for enhanced mainline connectivity is critical for the emerging market economy, as port statistics collected by JOC.com showed as much as 3.15 million TEU (35 percent), of the 9.14 million TEU handled at India’s major public ports during fiscal 2017-2018 were transshipped through foreign hubs. Colombo grabbed the largest share of that pie with 1.3 million TEU (42 percent), compared with 1.1 million TEU in the previous year.

Transshipment has long been a thorn in the side of the Indian government, which believes the practice harms the cost competitiveness of domestic goods in global markets.

Despite the reform and other proactive measures, such as port-customs services digitization, new figures suggest India’s foreign transshipment picture hasn’t really changed all that much. Out of an estimated 8.56 million TEU shipped to and from India from April through December (the first three-quarters of fiscal 2018-2019), the number of containers transshipped over international hubs stood at 2.33 million TEU (27.2 percent). These estimates compare with 7.81 million TEU and 2.25 million TEU (28.8 percent), respectively, for the same period in 2017, according to the JOC.com analysis.