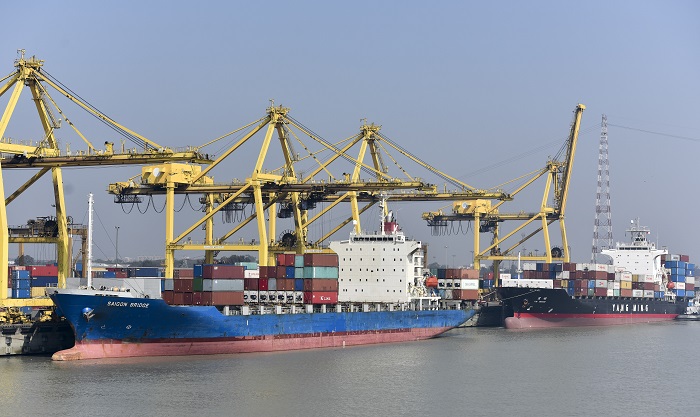 Congestion at the port is at its worst during the May-September, trans-Pacific, peak shipping season, but officials hope the additional capacity and introduction of round-the-clock operations will result in less congestion this year. (Above: Chittagong Port.) Photo credit: Shutterstock.com.

Officials are hopeful that cargo flow and efficiency will increase at Chittagong Port now that Bangladesh’s largest seaport has received the first rail-mounted gantry crane in its 130-year history.

The crane will be able to load and unload containers on and off two daily trains that run from Chittagong to the Kamalapur Inland Container Terminal in Dhaka, the capital, in four hours instead of eight to nine hours now, officials said.

Shipping Minister Shajahan Khan inaugurated the rail-mounted gantry crane on May 17, along with nine other new assets that included rubber-tired gantry cranes, a log handler, and mobile cranes. “We are solving the equipment crisis at Chittagong port gradually,” he said, adding that he hoped that the arrival of additional new equipment in August would further curb congestion.

Chittagong received 51 new equipment units last year, and will introduce 35 more cranes and other equipment over the summer in hopes of further improving handling capacity. The port handled 245,324 TEU in March, a record high for any month. It handled 2.56 million TEU in 2017, up 10.3 percent from 2.34 million TEU in 2016.

Congestion at the port is at its worst during the May-September, trans-Pacific, peak shipping season, but officials hope the additional capacity and introduction of round-the-clock operations will result in less congestion this year.

Shipper representatives are hopeful, too. “This port is [the] heart of Bangladesh’s economy. If the port functions, the economy will grow,” Mahbubul Alam, president of the Chittagong Chambers of Commerce and Industry and chairman of the Chittagong Port Users’ Forum, said at the inaugural ceremony. “With launching of [a] rail-mounted gantry crane, the port is touching a new milestone.”

Further, with congestion a continual problem on the Dhaka-Chittagong highway, shippers are keen to move their cargo by train, which, while cheaper than truck, suffers from inadequate locomotive capacity and is restricted to a single track. As a result, the transit time over the roughly 265-kilometer (165-mile) route is about 14 hours. That will be slashed by about half when an ongoing project to build a double-track is done, perhaps as early as 2020, according to Mainul Islam, deputy director of traffic transportation at Bangladesh Railway.

“If the number of voyages and capacity of train service from Chittagong port increases, we will think about bringing more rail-mounted gantry [cranes] in the future,” he said.