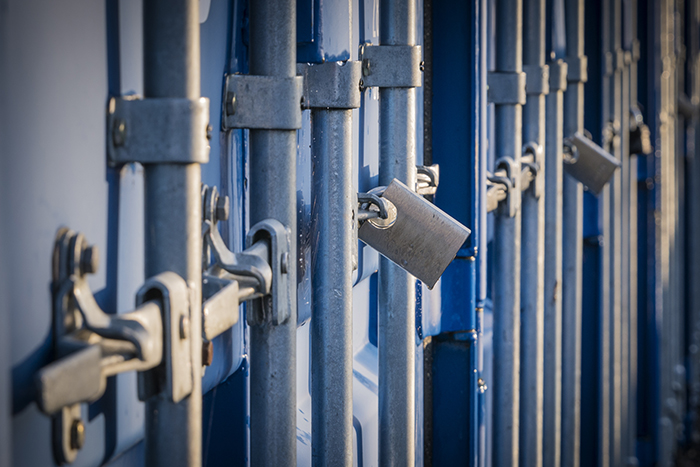 Standard locks will no longer suffice to secure containers in the port of Chittagong. Photo credit: Shutterstock.com.

A rule requiring electronic locking of containers and the re-imposition of weight limits for trucks is riling Chittagong shippers already suffering from sporadic port congestion.

The new electronic lock system will cost shippers $8 for 48 hours and another $0.7 for each hour thereafter. The e-lock service, which will be managed by one private company, will create a monopoly and also be time consuming for shippers, which they fear could lead to delays. If any container goes abroad with the e-lock fastened, shippers may have to pay fines.

Officially the rule is effective from June 26 when the Customs authority issued a rules to this regard. Due to severe protests from the business community, the e-lock service could not be launched until now.

The Bangladesh customs wants to implement the e-lock service to stop unscrupulous businessmen from removing goods from containers on their way to inland container depots (ICDs) from the port yard to avoid paying taxes. So the department wants to introduce the e-lock service through a particular company to crack down on such incidents.

“No such incidents of removal of goods from containers on their way to ICDs happened so far. The government wants to introduce the e-lock system to save interest of a particular company,” Chittagong Chambers of Commerce and Industry President Mahbubul Alam told JOC.com. “We won’t let it happen. We won’t pay,” he said.

He said the e-lock system will raise export-import cost, which will ultimately be paid by the shipper.

“Introduction of e-locks will increase cost of doing business,” he said.

Chittagong shippers on Sunday staged demonstrations and formed human chains that shuttered shops in order to demand the permanent closure of two truck scales on the Dhaka-Chittagong highway.

Under the present axle load policy a two-axle vehicle now cannot carry more than 13 tonnes (14 tons) of goods, but in the past they could carry between 20 and 22 tonnes. As a result, shippers now need to engage two vehicles instead of one to carry the same volume. This has double transportation costs, traders say.

Shippers say the government has installed 28 axle load control scales in 21 locations nationwide. However, the government has so far only activated the two weight limit scales on Dhaka-Chittagong highway, and the other scales are not yet operational.

As a result, traders who use the Dhaka-Chittagong highway for carrying goods pay double compared with traders using other highways.

Alam told the road transportation and bridge minister that the weight limit was suspended during the month of Ramadan until Eid-ul-Fitr, which helped transporters and kept prices of essential commodities under control.

But the reintroduction of weight control on the Dhaka-Chittagong highway has led to higher transportation rates that are making raw materials and consumer products more expensive.

“The traders who use Chittagong-Dhaka highway are facing uneven competition since the axle load policy is not effective in other highways of the country,” he wrote.

Alam, also the chairman of the Chittagong Port Users Forum, demanded permanent suspension of the axle load policy for the interest of export-import activities of the country. He told JOC.com he will wait for a decision from the minister before taking any further step on this issue.

“I believe the minister will act promptly considering business interest of the country,” Alam said.

AJM Nasir Uddin, the mayor of the Chittagong City Corp., separately asked the minister to relax the weight limit until the axle load policy could be applied on all highways.

Not clear is this new

Permalink Submitted by daniel.gazitua@... on Jul 17, 2018 11:04AM EDT
Not clear is this new electronic lock 'rule' is just a proposal or is already approved. Timeline?

Officially the rule is

Permalink Submitted by mszakonyi on Jul 17, 2018 11:43AM EDT
Officially the rule is effective from June 26 when the Customs authority issued a rules to this regard. But, due to severe protests from business community, the e-lock service could not be launched untill now though the private company is ready with equipments.