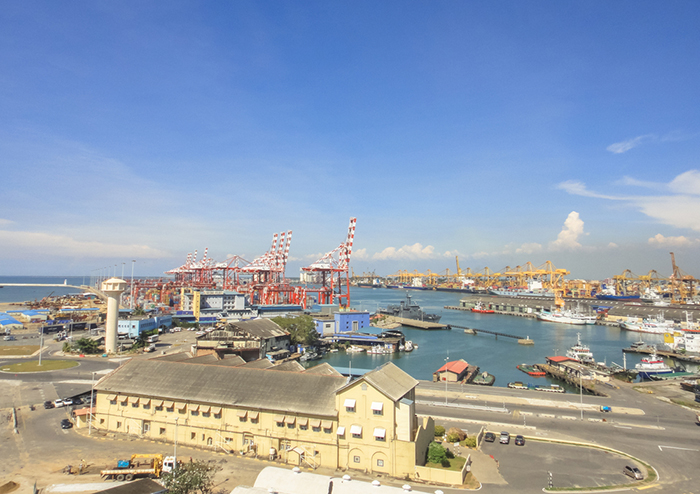 The Port of Colombo, pictured, is an example of how China's Belt and Road program is driving infrastructure development in South Asia.

An exciting region for port development globally, South Asia had a busy 2016 and much more is expected in 2017. Geopolitics is probably the biggest driver of port activity in South Asia, as regional powers invest in facilities to increase influence in the Indian Ocean and develop better access to resources and future markets in Central Asia and the Middle East.

That jockeying for influence and access will result in new capacity and process improvements at container ports and terminals throughout the region. Shippers forced to use the oft-congested, outdated facilities in India, Bangaldesh, Pakistan, and Myanmar stand to gain the most from the efforts of the likes of China and Japan to grow their influence in the region.

The high-profile, China-built Gwadar port in Pakistan, a major Belt and Road hub, made an effort to demonstrate its purpose in November with a ceremony attended by high-level officials celebrating the first large consignment of goods to travel overland from China and be shipped out of the port in the southwest of the country. The shipment of 160 containers bound for Colombo and Dubai was intended to represent the beginning of a major new overland trade route linking China with the Indian Ocean and the markets of the Arabian Gulf.

Under the original development masterplan, Gwadar was to handle around 100 million tonnes (110.2 million tons) of cargo in 2017, but it is nowhere near achieving that. Just one mainline shipping company currently serves the port, mostly carrying construction materials for the China-Pakistan economic infrastructure projects, as well as some locally produced exports.

A major objective is for the port to become a hub for oil shipments to China and an alternative to the Malacca Strait for the country’s energy needs. Two oil terminals capable of handling 200,000 deadweight tonnage tankers are being constructed to handle a growing portion of the huge quantities of oil the world’s second largest economy buys from the Middle East.

The development of Gwadar is provoking a response from other regional powers concerned about the boost in influence it is giving China in the Indian Ocean region. This, and the easing of economic sanctions against Iran, resulted in movement by India on the long-discussed development of the Iranian port of Chabahar.

Like Gwadar, Chabahar is also on the Arabian Sea and located just 70 kilometers (43.5 miles) from the Pakistani port. Progress on the project is slow, but there is commitment from India at the highest level, and more interesting developments in this part of the world can be expected over the course of 2017.

Sri Lanka is another major destination for Chinese Belt and Road funding for port development. An official agreement for state-owned China Merchants to buy an 80 percent stake in the loss-making Hambantota port for more than $1 billion is expected early in 2017. The purchase of the loss-making port will complement the company’s existing investment in Colombo International Container Terminal, which is rapidly becoming one of the region’s major transshipment facilities.

Bangladesh is another country in South Asia to watch this year as competition to develop much-needed modern port facilities intensifies.

After 10 years of average annual growth of 6 percent, the South Asian country desperately needs modern port infrastructure. Its export sector is expected to eclipse $50 billion in value by 2021 as global demand for its ready-made woven and knitted garments, frozen foods, jute, and leather continues to rise.

More than 90 percent of foreign trade volumes are currently handled by the old and inefficient Chittagong port. Located 16 kilometers up the Karnaphali river from the Bay of Bengal, Chittagong has a draft of only 9.2 meters (30.2 feet), requiring the costly practice of transferring cargo from large to small vessels before berthing and discharge.

Despite ample commercial incentives and a clear need for a modern port, a definitive deep-sea port project in Bangladesh has yet to materialize as China, Japan, and India fight for the right to provide financing, and with that gain a ticket to build their influence in the country and region.

In India, the mammoth Sagar Mala port-led development program will continue to be the main driver of port development over the course of 2017.

Sagar Mala is centered on the modernization of India’s ports as well as the provision of infrastructure that can move goods to and from ports quickly, efficiently, and cost effectively. Port hinterlands are to be industrialized and lead economic transformation of the country’s coastal regions, which already account for more than 60 percent of national GDP.

The program is central to prime minister Narendra Modi’s plans to build a manufacturing-led, trade-export growth economy mainly fueled by private domestic and foreign investment. The government hopes that slashing logistics costs to around 10 percent from 18 percent will allow it to reach this goal.

The program envisages spending somewhere between $10 billion to $11 billion on port upgrades over the coming five years, adding up to 1,500 tonnes per annum in capacity and including the development of several new greenfield ports. A further $3 billion or more is to be spent on dozens of last mile port-rail links to increase the efficiency and cost effectiveness of delivering cargo to and from the ports.

Mobilizing the necessary funding remains one of the key challenges for Sagar Mala. Maintaining the political ability to implement and deliver projects is another major challenge.

The government currently has sufficient motivation and the clout necessary to introduce the reforms and policies to successfully deliver Sagar Mala and its objectives, but it is a situation that is subject to change. Ensuring local populations and governments are open to the major economic and social change inherent in the program will be key to the speed with which the program moves towards its objectives.