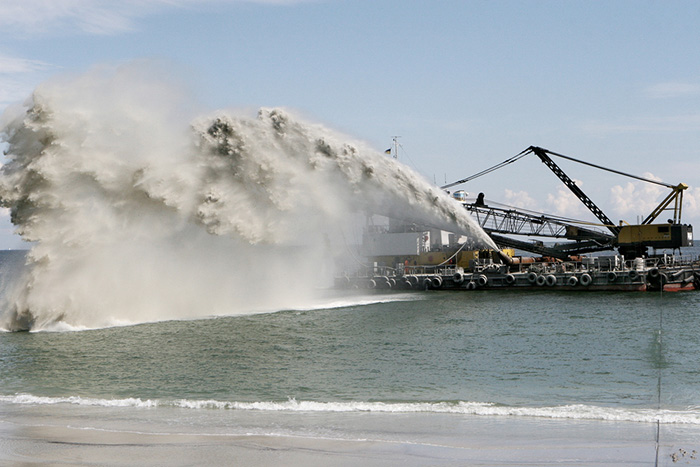 The long-stalled Phase 2-4 of the Busan New Port is getting back in motion with the submission of applications to begin reclamation works, South Korea's Ministry of Oceans and Fisheries (MOF) announced Thursday.

The entire Busan New Port development project is slated for completion in 2020 with 34 container terminals, four feeder terminals, one roll-on, roll-off terminal, and one multipurpose terminal. Of the 45 new berths in Busan New Port, 23 were completed in earlier phases and Phase 2-4 would provide three of the berths.

Work on Phase 2-4 has been delayed by in an inability to get funding. A consortium led by SsangYong Engineering and Construction that submitted project proposals in 2004, with a budget of 566 billion South Korean won ($473.6 million), backed out during the depths of the Great Recession.

The MOF then began negotiations with the next in line for the job, a consortium led by Hyundai Development, and a provisional contract was signed in December 2010. The main founder of the consortium, however, left the company, delaying the finalization of the contract.

That group was restructured in April 2013, with Hyundai Development and Hyundai Merchant Marine each having an equal share. Renamed Busan Container Terminal, the group members had trouble getting the necessary financing despite the fact the contract was finalized in July 2013. Consequently, submissions of designs for the port were delayed.

Eventually, the government came to the rescue through its 30 trillion won investment stimulation program, which was introduced earlier this year and encourages the private sector to invest in new growth industries by reducing their risk exposure

According to the plan, the government will invest 15 trillion won through the state-owned Korea Development Bank, with the other funds coming from the private sector. MOF hopes that with the funding resolved, reclamation works for Phase 2-4 can start within the year.

Total container throughput at Busan Port Authority hit a record 18.68 million 20-foot-equivalent units in 2014, with Busan New Port, which opened in 2006, accounting for 64 percent, or 12 million TEUs. The port is trying to remain alluring as a major transshipment hub by investing in new facilities and even the removal of an island to ease navigation of its waters.

In July, the most recent month for which statistics are available, Busan’s overall throughput grew 0.5 percent on a year-over-year basis, according to the port.

Busan is among the most productive ports in the world, ranking in the global top 10 for ships of all sizes.

A version of this story originally appeared on IHS Martime 360, a sister product of JOC.com within IHS.

How to Improve OTIF: 15 Tips for On Time and In Full Delivery
END_OF_DOCUMENT_TOKEN_TO_BE_REPLACED