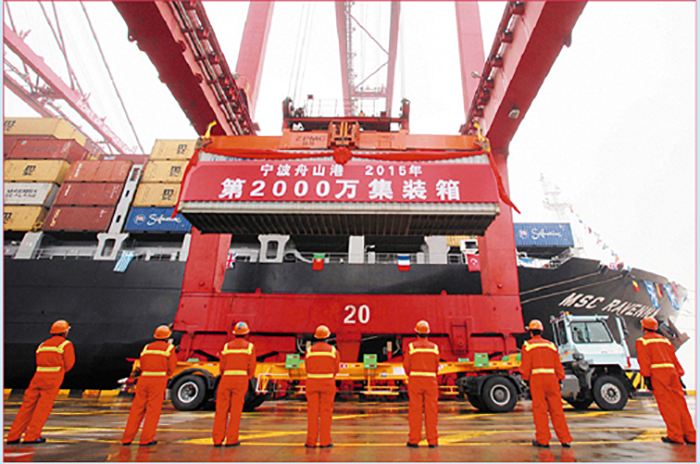 The 20 millionth TEU is lifted at the Ningbo-Zhoushan Port on Dec. 24.

China’s Ningbo-Zhoushan Port, the fifth-largest in the world and third-busiest in China, lifted 20 million 20-foot-equivalent units for the first time in its history, joining an elite club of four other ports that have passed that milestone.

When the 20 millionth TEU was lifted off Mediterranean Shipping Co.’s Ravenna on Christmas Eve, Ningbo was catapulted into a sphere of mega-ports that includes Shanghai, Singapore, Shenzhen and Hong Kong.

The port attributed its record-breaking performance to its ability to handle mega-ships, its favorable geographic position in the Yangtze River Delta, a critical juncture in Beijing’s Belt and Road strategy, and its targeting of transshipment cargo.

The port has opened a transshipment operations center and stepped up its development and coordination with major carriers like Maersk and MSC, leading its water-water transshipment traffic to jump 22 percent to more than 4 million TEUs from January to November year-over-year.

Ningbo’s aggressive pursuit of intermodal rail services, which connect to 13 inland ports, also played a role, as January to November intermodal rail traffic at the port is up 20 percent from 2014 to 150,000 TEUs.

The Ningbo-Zhoushan port was previously two separate ports that were joined only in October, and the port says it will continue to focus on integrating operations and personnel while working to wring more efficiencies out of its systems in 2016.

The port will also continue to work to capture transshipment cargo while expanding the reach of its intermodal rail.

A strong focus on transshipment could help protect the port should China’s manufacturing and export sectors truly stumble.

The rate of growth in China's exports to the world is expected to fall by more than half between this year and last, with 2015 forecast to register export growth of 2.3 percent compared to 4.9 percent last year, according to World Trade Services, a sister product of JOC.com within IHS.

Exports to Europe are projected to end the year down 0.4 percent compared to 2014, when exports were up 12.9 percent.

China's exports to the U.S. in November were up 5 percent year-over-year to 1.7 million TEUs, according to PIERS, a sister product of JOC.com within IHS.

The most recent readings from major manufacturing indices in China show the sector is still contracting with the National Bureau of Statistics’ PMI, which looks at the larger state-owned factories, fell to 49.6 in November, its lowest reading since August 2012 and down from October’s 49.8.

The Caixin Manufacturing PMI, which represents smaller, private enterprises, was at 48.6 in November, the ninth straight month the index showed contraction.

Flat first half for China’s ports as economy slows