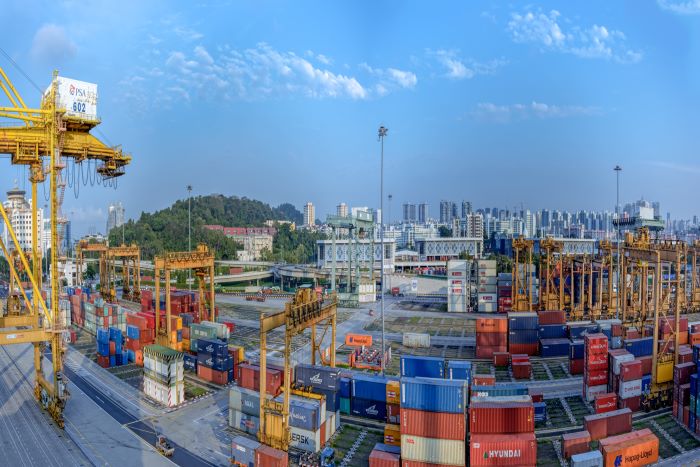 About 24 million TEU of existing terminal capacity at southeast Asian ports needs upgrading to handle ultra-large container ships amid an anticipated post-coronavirus shift of manufacturing away from China to other countries in the region.

The assessment by maritime transport consultancy Drewry shows countries including Thailand, Vietnam, and Indonesia are likely to be the main beneficiaries of the move out of China.

Eleanor Hadland, senior analyst at Drewry's ports and terminals business, said some of the improvement projects are already in progress. A further 16.5 million TEU of extra capacity is expected to become operational by 2023, she told a webinar audience on Tuesday. That’s in addition to the 24 million TEU of existing capacity requiring upgrades.

This comes as Drewry forecasts global container volumes would drop 9 percent this year amid the global economic slowdown caused by the COVID-19 pandemic. Box volumes dropped 4 percent in the first quarter as China shuttered industrial output to control the spread of the virus.

“The real pain will be seen in the second quarter,” Hadland said, with volumes hit by the fall in exports from China and lockdowns in North America and Europe that forced people to stay home.

Carriers withdrew about 30 to 40 percent of capacity on key Asia-Europe and trans-Pacific trades in April as cargo volumes evaporated in response to the fall in economic activity, according to figures from Sea-Intelligence Maritime Consulting.

Hadland said forecasts for next year vary between a 13 percent increase in box volumes to a further 6 percent contraction.

The new projects in southeast Asia include the first phase of Tuas mega port in Singapore which will eventually have a capacity to handle 65 million TEU and allow existing facilities, including the Pasir Panjang Terminal, to close.

DP World is building the $1.2 billion Maspion Container Port at Gresik in East Java, Indonesia, which is due to open in 2022. In the Philippines, International Container Terminal Services, Inc. (ICTSI) is planning to upgrade two ports in Iloilo.

Hadland said 40 terminals in China are capable of handling box ships over 14,000 TEU compared with 13 terminals in southeast Asia.

Terminals in China have the capacity to handle 267 million TEU, while those in southeast Asia can handle 159 million TEU. But Hadland pointed out the gap is not so great when measured in available capacity per 1,000 workers, with some ports, including Singapore, more efficient than those in China.

She said the medium-term impact of the coronavirus pandemic will see firms adopt a “China plus-one” model of production, with manufacturers diversifying away from China to other countries, but not moving all production out of the country.

“China is still locked into intra-Asia,” Hadland told the webinar, adding that both domestic and multinational firms will diversify their production bases.

Andy Lane, a partner in Singapore-based port advisory firm CTI Consultancy, said, “Ports in China appear to have surplus capacity today and that would then only exacerbate if export demand is relocated elsewhere.”

The risk to firms of having all production done in one country was shown in February when China instituted a country-wide lockdown to stop COVID-19, a move that halted transport movements and paralyzed ports.

While China is returning to normal and the virus has spread globally, firms are considering diversifying production to other countries to make supply chains more robust against sudden shocks and disruptions.

“There will probably be some re-shoring, either of critical supplies, or products which can be made in fully automated factories,” Lane said. “I do think that we will see further supply chain diversification moving forward, creating a hedge against disruption, and that shorter supply chains might be seen as attractive with shorter lead-times and potentially lower logistics costs. Diversifying to another Asian country will only tick some of these boxes."