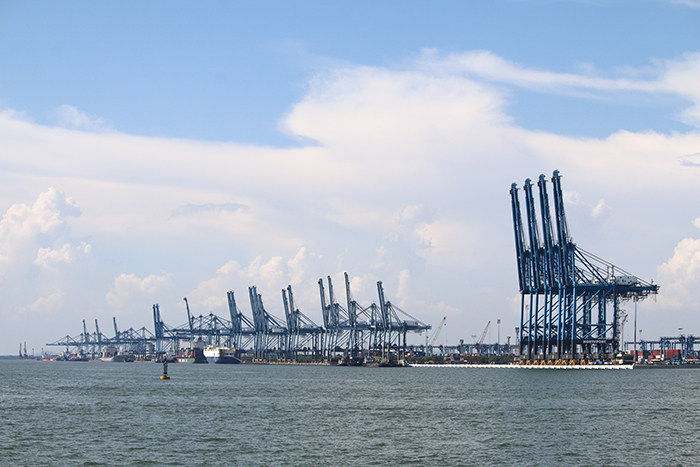 The new alliances will cost Port Klang a substantial amount of throughput.

Malaysia’s Port Klang will probably lose more than 10 percent of its annual throughput as a result of the alliance shifts, industry analyst Alphaliner believes.

Klang is forecast to lose a total of six of its current 11 export calls: two to north Europe, two to the US West Coast, and two to the Mediterranean. The gain of one call to the US East Coast makes it a net loss of five calls that would cut around 1.2 million TEU out of its annual throughput.

“Port Klang will be the big loser as a result of the alliance shifts. Singapore will take up a large portion of the losses due to its agreements with CMA CGM and Cosco, which happen to be the first- and second-largest customers at Klang,” said Tan Hua Joo, executive consultant with Alphaliner.

Volume at Westports, which handles more than three-quarters of Port Klang’s container volumes, rose 10 percent year-over-year to 9.95 million TEU and net profit was up 26 percent to RM63.69 million ($14.6 million).

Earlier this week, following the company’s annual general meeting in Kuala Lumpur, CEO Ruben Emir Gnanalingam said growth in 2017 would be “marginal,” largely as a result of the alliance shifts.

“The industry will go through a recalibration process as the shipping lines adjust to different routes and different alliance partners. I would give it 15 months before the dust finally settles to get a clearer picture of container growth,” he said.

The Port of Tanjung Pelepas, where 2M and Hyundai Merchant Marine is the anchor customer, is expected to gain one export call, and Singapore should gain two export and two import calls.

Indonesia’s Tanjung Priok received its first direct, mainline call earlier this week, with CMA CGM deploying 17 vessels on the trans-Pacific service. News of the launch of the service was music to the ears of the Jakarta government, which has prioritized securing direct mainline calls on major tradelanes.

Alphaliner’s Tan said he believes a new liner shipping environment characterized by higher levels of consolidation will be less forgiving to investment mistakes by terminal operators, and that a better coordinated approach to port planning was needed to ensure a proper supply and demand balance in the region.

“We want to avoid repeat of the situation in south Vietnam, where you now have 20 different terminal operators fighting for 4 million TEU. Several operators are stuck with terminals that have little hope of fulfilling their design capacity.”

There are signs that the mistakes that created the capacity problem in south Vietnam are being repeated in the north, where 16 operators now compete for just 3 million TEU and a new deep-sea port is planned at Lach Huyen.

“‘If you build it they will come’ is no longer a viable strategy for port development. Carrier and alliance consolidation will drive further hub consolidation and price competition and tariff reductions,” said Tan.

Global terminal operators are not immune to investment mistakes, something evidenced well by their presence in south Vietnam, and high export growth cannot necessarily overcome poor port planning and policies.

China’s Belt and Road program, with its deep pockets and geopolitical aspect, could add to distorted terminal supply and demand balance in certain locations.

Plans for new facilities along the Strait of Malacca, for instance, have been widely questioned in terms of their commercial viability.

As noted by Tan, “In the case of the planned Melaka Gateway, there is insufficient demand for container gateway and transshipment on west coast Malaysia. As far as we’re concerned, it should not be considered.”