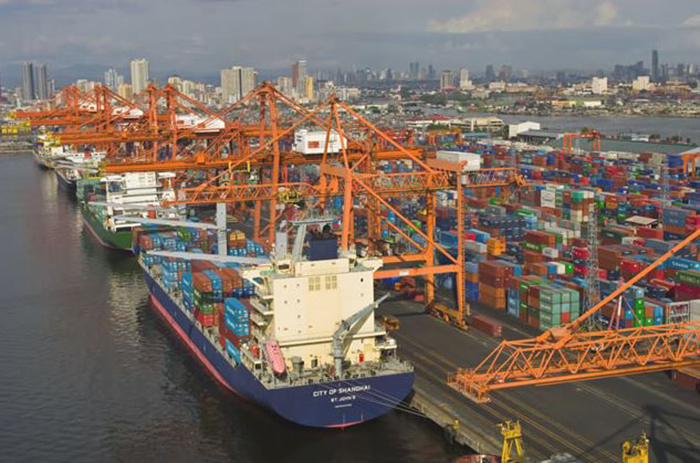 The yards at the Port of Manila, pictured, have been less hectic since the lifting of a city ban on trucks and the introduction of a new IT system.

Port officials in Manila said a new terminal appointment and booking system has substantially reduced the possibility of a repeat of the congestion that plagued facilities in the city for the past two years.

The Philippine Ports Authority said the introduction of the system, known as TABS, has had a major impact on relieving pressure on yard operations and that a recurrence of congestion problems over the holiday period was unlikely.

Efficiency gains as a result of the system helped boost the government’s net income from port operations in the first three quarters of the year by more than 16 percent, it added.

Yard utilization levels are currently around 65 percent compared with over 90 percent during congestion periods, and yard productivity has tripled to around 30 moves per hour.

“This time we are seeing very effective movements of shipments. It is averaging 25 to 30 moves per hour compared with just 10 (moves per hour) during the congestion,” said Jay Daniel Santiago, PPA general manager.

“With this kind of yard utilization, we can say that Philippine ports are ready to handle the expected increase in the volume of cargo due to the run-up to Christmas.”

A daytime truck ban imposed in February of 2014 to reduce traffic snarls in metro Manila resulted in chaos at container handling facilities as trucks were unable to collect boxes. The port congestion persisted for months after the ban was relaxed and resulted in a decline in container throughput. Intra-Asia carriers were forced to scramble to adjust sailings and schedules as Manila-bound containers piled up at hubs around the region.

PPA reported net income from port operations rose to 5.99 billion Philippine pesos ($124 million) in the year to the end of September on the back of an 8 percent rise in gross revenue to 10.62 billion pesos.

“The decrease in storage fees of about 39.56 percent brought about by the implementation of several port anti-congestion measures has been offset with other revenue items as operations became more efficient and effective due to these measures, specifically TABS, which hastened the movement of inbound and outbound containers,” said Santiago.

PPA recently signed a joint agreement with the Port of Antwerp and APEC-Antwerp/Flanders to investigate ways to further streamline port operations.

Worker development is one focus of the agreement, and the two parties are to cooperate on capacity building to enhance skills and knowledge of personnel involved in the management and operation of the country’s ports. The agreement also covers cooperative exchanges on the development, modernization, and management of port facilities; improvement of legal and regulatory frameworks; infrastructure investment, and ways to increase energy efficiency and profitability.

“This agreement will give us the edge to further simplify and reduce the complexities in our overall supply chain considering that it is a challenge for a country composed of more than 7,000 islands,” Santiago said.

The Belgian signatories said they want to become more familiar with the plans and programs of PPA to determine possible areas of collaboration in the future as well as introduce Belgian technologies and services to port operations in the Philippines.