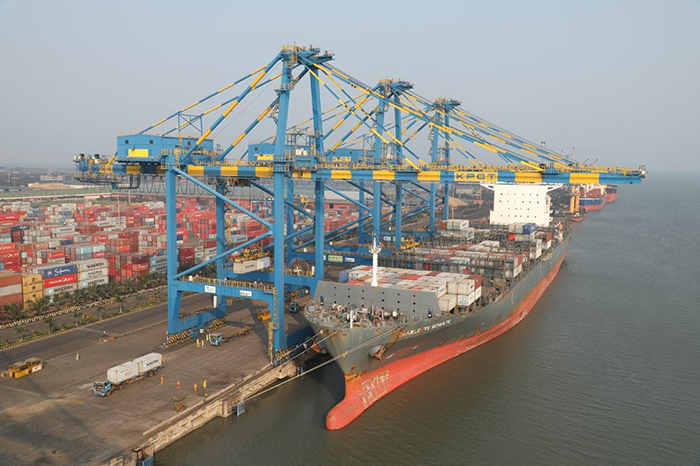 Krishnapatnam, an emerging alternative private harbor about 112 miles north of Chennai, appears to have seized the opportunity to lead transshipment handling in the region. Photo credit: Krishnapatnam port.

A steady increase in India’s domestic transshipment handling — propelled by a May 2018 cabotage rule change — signals further ocean carrier moves to broaden their ports of call in the emerging market economy as consumer demand for end-to-end supply chains swells.

With the cabotage relaxation, foreign ship operators can transport laden export-import containers for transshipment and empty containers for repositioning between Indian ports without any specific permission or license, unlike in the past, when domestic ship operators had a virtual monopoly over the coastal or intra-India transportation.

In its latest filing to the Ministry of Shipping, the Container Shipping Lines' Association of India (CSLA) — the local umbrella body of foreign shipping lines — said member carriers were able to redirect an estimated 94,986 TEU of containerized freight to mainline ships calling at Indian ports during February, which was the highest monthly incremental gain since the relaxation of the rule and up from 93,646 TEU in January.

According to CSLA, the share of loaded containers in that regained volume hit a new high of 88 percent, or 83,324 TEU, versus 87 percent during January, with empty equipment movement constituting the remaining 12 percent.

Although there are still open issues revolving around the real beneficiaries of such freer, unrestricted coastal operations, where privately run minor terminals obviously hold an edge over state-owned ports because of their unregulated tariffs and infrastructure advantages, industry leaders generally hold a view that India’s container shipping industry is slowly but steadily heading into a more streamlined, shipper-oriented environment.

Statistics show an estimated 2 million TEU of a total 4.5 million TEU transported to and from the country’s southeastern region are currently relayed over foreign ports, but recent direct call additions at Tuticorin and Cochin by a Wan Hai Lines-led intra-Asia consortium are expected to help mitigate the burdensome logistics issues shippers in that region encounter when shipping their goods.

Although transformation from foreign transshipment to direct shipping is going to be a long and onerous task, there are some encouraging trade trend indicators. India’s foreign transshipment as a percentage of total containerized trade during the April-December 2018 period edged down to 27.2 percent from 28.8 percent in the same period of 2017, according to data collected by JOC.com.

“Post cabotage relaxation, the Indian government is keen on promoting major ports on the east and west coasts to help the trade demand in attracting more transshipment cargo at Indian ports,” according to Maersk Group in a recent regional market analysis.

The Krishnapatnam port, an emerging alternative private harbor about 112 miles north of Chennai, appears to have seized the opportunity to lead transshipment handling in the region. Out of a total record throughput of 506,000 TEU at Krishnapatnam (renamed Navayuga Container Terminal, or NCT) during fiscal year 2018-2019, which ended March 31, as much as 230,682 TEU came from transshipment movement, officials told JOC.com.

Moreover, that transshipment figure included an all-time monthly high of 27,428 TEU during March.

“NCT has taken giant strides in getting established as a transshipment hub on the east coast of India, and we are working toward making it the hub port in the Bay of Bengal,” said Anil Yendluri, CEO of Krishnapatnam port. “Reaching this [volume] milestone would not have been possible without the strong partnerships forged with shipping lines wherein by working together we assure the speed, transparency, and fluidity our shippers have come to expect from NCT.”

“We are further expanding our terminal capacity from 1.2 million TEU to 2 million TEU by the end of 2019 to be ahead of the demand,” officials said.

Another dominant transshipment contender, DP World’s International Container Transhipment Terminal (ICTT), or Vallarpadam Terminal, at Cochin port also ended fiscal year 2018-2019 on a solid note, with volume up 7 percent year over year to 594,592 TEU, according to new data collected by JOC.com. ICTT's growth prospects are expected to brighten further as a result of Wan Hai’s intra-Asia service addition, which is scheduled to begin April 9.