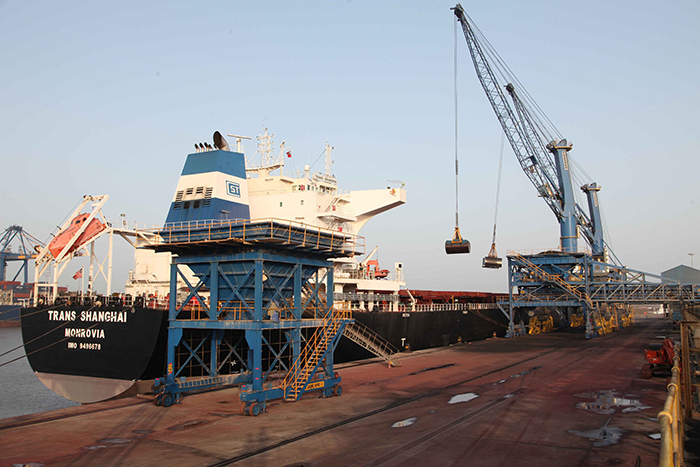 Adani Ports hopes Hazira, pictured, can be as successful in gaining cargo that previously moved through Jawaharlal Nehru Port Trust as the company's facility at Mundra.

As Jawaharlal Nehru Port Trust nears completion of work to open its fourth container terminal, which will eventually double the port’s capacity, private rival Adani Ports has launched a roadshow to position its Hazira Port as an alternative gateway for shippers in the northern-central India region.

“The port of Hazira, located in Surat, is one of India’s most industrialised cities and amongst the largest diamond and textile hubs in the world. The port, which is just 120 nautical miles north of Mumbai, is an ideal alternative to Nhava Sheva [JNPT],” the private conglomerate said in a trade announcement.

That effort comes as Hazira booked a 96 percent year-over-year increase in container throughput in fiscal year 2015 to 2016 through the end of March following the addition of new mainline services. Fiscal 2015 to 2016 volume reached 302,755 twenty-foot-equivalent units, compared with 154,374 TEUs in the prior year, according to statistics compiled by JOC.com.

Some of those service additions may have been a result of previous congestion and productivity issues at JNPT.

JNPT had to deal with a spate of labor troubles last year, and as delays got worse at the public harbor hinterland cargo was shifted to nearby private ports, with Adani Group-owned Mundra being the biggest beneficiary. Looking to capitalize on those gains and fill new capacity, Adani Ports last month held a similar trade summit in Rajkot to tout the benefits of its flagship facility at Mundra.

Hazira Port began container operations in early 2013. The container terminal there includes two berths with total quay of 2,132 feet, a draft of 46 feet, about 3,300 ground slots, six quay cranes, and 16 rubber-tire gantry cranes. It is capable of handling roughly 1 million TEUs per year.

The private port earlier this year expanded its hinterland reach with Container Corporation of India adding a regular train service connecting Hazira to Pithampur, a busy inland destination in the central region.

At the same time, the first phase of JNPT’s fourth terminal, under a 30-year contract awarded to PSA International, is scheduled to be ready toward the end of 2017. At a recent port-trade session, JNPT officials and other stakeholders stressed the need to set the groundwork for future growth amid increasing competition and weak demand.