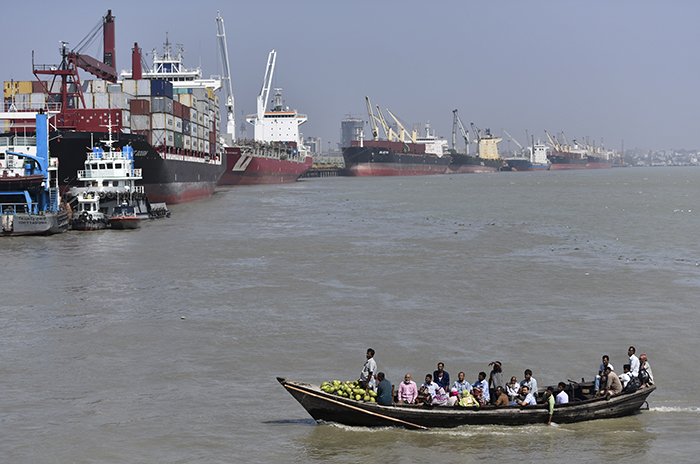 The Chittagong port is in desperate need of infrastructure improvements.

The loss of nearly 2 meters (6.6 feet) in draft has only made matter worse. Six of the 13 jetties at the port are in the range of 6 to 7 meters, preventing ships with drafts of 8.5 meters, which commonly call the port, from berthing, and forcing them rely on just two jetties able to accommodate such ships.

After cranes at those two jetties unload containers from 8.5-meter-draft vessels to reduce their draft to 6 meters, the ships are shifted to other jetties with depth of 6.5 meters to unload the rest of the containers and the process repeats. This is leading to higher costs on top of the delay because of the need to pay two different groups of workers to unload the ships. Meanwhile, ocean carriers have been pushing congestion surcharges for Chittagong-bound container ships from Shenzhen, Shanghai, and Guangzhou by $50 to $275, according to port officials.

From June 15 Maersk Line began charging $600 per container into Chittagong ships from north and south Asia, up was from $400 to $450 in November last year.

The port has acknowledged the dredging issues, but said it is unable to take action.

Shippers, facing a lead time crisis because of their inability to get raw materials off ships and into their factories, have been clamoring for government support.

Shipping minister Shajahan Khan on Tuesday promised that he and the government were doing all that it could, and has called for a July 24 meeting with a cross-section of port users to work on a solution.

A. K. Azad, chairman of Ha-Meem Group, a top garment manufacturer with annual turnover of $550 million, said his sector is now in massive trouble because of the worsening of what was already pronounced and painful Chittagong congestion.

“The control of apparel sector is now going to the grip of neighboring India due to various problems. The government should take immediate measure to resolve the port congestion,” he said.

Chittagong’s port traffic jumped 16 percent year over year in 2016 to 2.3 million TEU, nearly double its designed annual capacity of 1.7 million TEU. Since 2012, the port’s capacity has grown by only 8,000 TEU while the number of container-handling equipment has been flat.