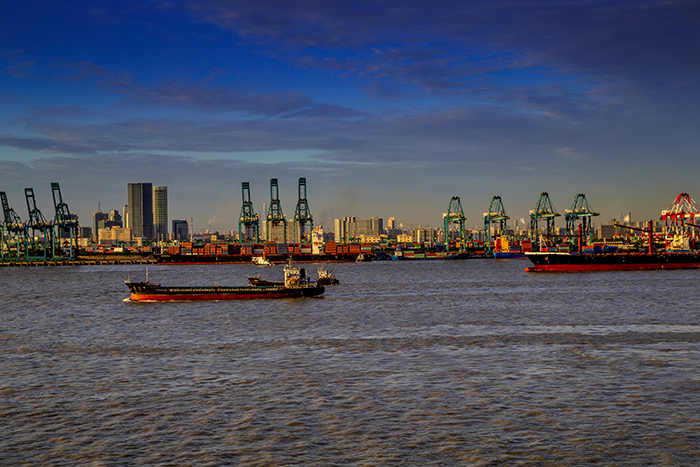 Container throughput at the port of Shanghai rose 7.6 percent year-over-year in the first two months of 2017.

China’s container ports got off to a strong start in 2017, with healthy volume increases at most of the main commercial ports over the first two months of the year.

Throughput at the top eight ports expanded 4.8 percent in January and February to just more than 24 million 20-foot-equivalent units (TEUs) compared with 22.98 million TEUs handled in the first two months of 2016, according to figures from the Shanghai Shipping Exchange.

Growth in throughput at Hong Kong resumed in August of last year following more than two years of successive monthly declines. The port had a very strong February, with volumes up 26 percent, although the Chinese New Year falling in late January this year compared with February in 2016 adds a significant distortion to the monthly comparison.

The growth in volumes at China’s ports has so far not transferred to the rate environment, and spot rates on the trans-Pacific have continued to decline since their mid-January peak.

The spot rate for shipping a 40-foot container to the US West Coast is currently around $1,340, down from a peak of $2,211 in mid-January, data from the Shanghai Shipping Exchange’s Shanghai Containerized Freight Index show.

The Pearl River Delta port of Guangzhou is the top performing port in China in growth terms so far this year. Year-over-year throughput at Guangzhou in the first two months expanded by 11.3 percent to just less than 2.8 million TEUs.

Shanghai is performing strongly as well, with year-over-year volume growth of 7.6 percent. More than 5.9 million TEUs crossed the wharves at the world’s busiest container port in the first two months of the year.

The other main Yangtze River Delta port of Ningbo-Zhoushan continued to build on the 4.5 percent growth it achieved in 2016, with volumes up 4.8 percent to more than 3.8 million TEUs.

The eastern port of Xiamen moved up one place in China’s port rankings to become the country’s seventh-largest port ahead of Dalian. Xiamen volumes rose 8.6 percent in the first two months of the year to more than 1.4 million TEUs.

Shenzhen and Qingdao were the only two of the top eight ports that booked declines in volumes over the first two months. Volumes at Shenzhen fell by 1.2 percent, continuing a trend of declining throughput since last year, when full-year volumes fell by just less than 1 percent.

Volumes through the northern port of Qingdao, China’s fifth-largest container port, fell 4.4 percent in January and February. Qingdao port is working to boost its role as a transshipment hub for northeast Asia and entered a strategic cooperation with Cosco Shipping Ports to achieve that at the end of last year.

IHS Markit Senior Economist Mario Moreno forecast Asia-US trade should grow by close to 7 percent this year after rising more than 4 percent in 2016 and that China leading the gains.

At the JOC’s 17th Annual TPM Conference in Long Beach, Moreno acknowledged that a US–China trade war could upset the potential for good numbers on the trade this year, but said the risk of such a war was “still small.”

China booked a rare trade deficit in February after imports shot up by more than 38 percent, their biggest increase since February of 2012, while exports shrank by 1.3 percent, creating a trade deficit of $9.15 billion for the month. The trade numbers were distorted due to the Chinese New Year holiday taking place in different months over both years.

Canada Trade and Shipping Outlook
TPM22: What We Learned — Container Shipping in the Crosshairs
Managing E-Commerce From Order to Delivery and Beyond
END_OF_DOCUMENT_TOKEN_TO_BE_REPLACED