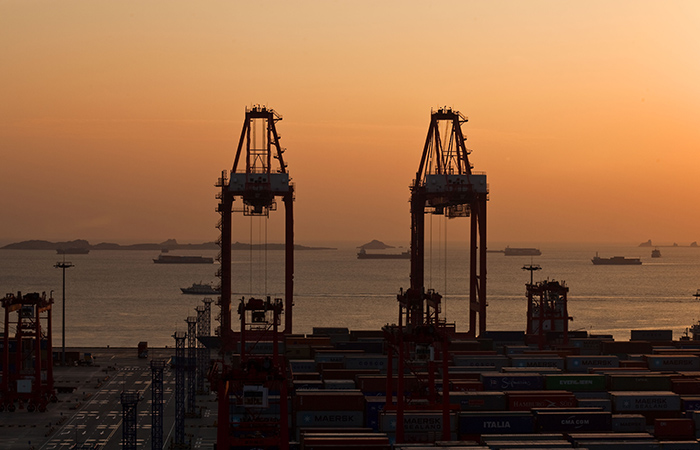 Traffic at Shanghai increased 1.6 percent in 2016.

With the exception of Shenzhen, where full-year volumes fell by just under 1 percent, all of the top eight container ports posted gains, with Guangzhou, Qingdao, and Xiamen posting the highest levels of growth.

Throughput at Guangzhou expanded by 8 percent to just under 18.9 million TEUs as the port authority took a range of measures to increase its share of Pearl River Delta, PRD, cargo volumes, including cash rebates and tax incentives for lines and increased promotion to shippers in the United States.

Guangzhou is undertaking a series of major infrastructure projects and facilities upgrades at its flagship Nansha terminals as it gears up for a planned listing once approval is granted by the China Securities Regulatory Commission.

The port is opening a new office in Europe as part of efforts to win more free-on-board business from customers in mature markets. It had previously opened an office for this purpose in the United States, which it said was an important factor in the growing business at its Nansha terminals.

“We would like to achieve that success also in Europe and to benefit more from the deep-sea east-west routes,” said Guangzhou Port Group Vice President Song Xiaoming.

Because of its location, Guangzhou is also benefitting from a shift in the PRD cargo base westwards.

Qingdao, the country’s fifth-largest container port by volume, handled just more than 18 million TEUs in 2016, a 4.8 percent rise on the 17.2 million TEUs handled in 2015.

Qingdao Port International said in a statement yesterday it entered a transaction agreement and strategic cooperation with Cosco Shipping Ports aimed at boosting its role as a transshipment hub for northeast Asia and to co-invest in terminals overseas, including the Khalifa Port Container Terminal II project in Abu Dhabi.

The agreement calls for Cosco Shipping Ports acquiring 16.81 percent of the issued share capital of the port operator for $845.6 million, taking its total shareholding to 18.41 percent.

Part of the deal will be settled by the transfer of a 20 percent equity interest in Qingdao Qianwan Container Terminal to Qingdao Port International.

Qingdao Port International said the agreement will enable it to better take advantages of opportunities under the Chinese government’s Belt and Road program, expand its international business, and develop its position as a transshipment hub serving northeast Asia.

The eastern port of Xiamen also performed strongly in 2016, with volume up 4.7 percent to 9.6 million TEUs.

Volume at the Yangtze River Delta port of Ningbo-Zhoushan expanded by 4.5 percent to 21.6 million TEUs, and the port of Tianjin increased throughput by close to 3 percent as it continues to recover from the devastating explosions that decimated business in the latter part of 2015.

Hong Kong ended 2016 with full-year volumes down 2.5 percent, a performance that was much better than anticipated in the middle of 2016.

Preliminary figures from the Hong Kong Port and Maritime Board show the port of Hong Kong handled 19.6 million in last year. Of that figure, the terminals at Kwai Tsing handled just more than 15.2 million TEUs, while the river trade portion of the the port’s traffic accounted for the other 4.4 million.

Hong Kong reversed more than two years of monthly volumes declines in August, when it booked positive growth for the first time since June 2014.

In an effort to compete more effectively in an environment of increasing consolidation in liner shipping and to deal with more aggressive competition from regional transshipment hubs, three of Hong Kong’s terminals entered a collaborative agreement under which the majority of berth space at the Kwai Tsing terminals come under unified management and operation for the first time.

The move should support better capability to improve and develop barge operations, a crucial factor for the fortunes of Hong Kong, as PRD cargo sources shift further westwards, increasing trucking costs to the special administrative region and thereby reducing its competitiveness for gateway cargo.