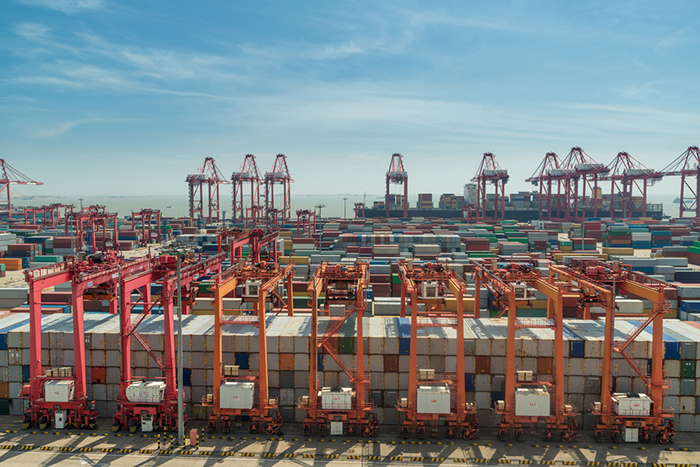 Traffic at the Port of Shanghai, pictured, increased 6 percent year-over-year in November.

November volumes at the top eight ports of the world’s second-largest economy expanded 3.9 percent year-over-year to just over 13 million twenty-foot-equivalent units. The figure takes year-to-date volumes to 140.6 million TEUs, a rise of 2.9 percent on the first 11 months of 2015 and generally in line with expectations of full-year container throughput growth of around 3 percent.

Throughput at Shanghai, the world’s busiest container port, grew 6 percent year-over-year to 3.2 million TEUs. The other major Yangtze River Delta, or YRD, port of Ningbo-Zhoushan registered growth of 5.7 percent, taking its total year-to-date volumes close to 20 million TEUs. Combined throughput at the YRD ports was up 2.6 percent on a year-to-date basis, figures from the Shanghai Shipping Exchange show.

The three major ports in the Pearl River Delta performed very strongly in November, handling a combined 5.6 million TEUs, a rise of 11.5 percent compared with November 2015.  Volumes through the port of Guangzhou expanded by nearly 26 percent to over 1.8 million TEUs, around 40,000 TEUs more than the number of containers handled over the border at Hong Kong in the same month.

With throughput up by more than 10 percent, Hong Kong also had a strong November as it continues to claw back some of the heavy losses sustained over the past two years. Hong Kong’s year-to-date throughput now stands at negative 4 percent, preliminary figures from the Hong Kong Maritime and Port Board show.

The ports in the north of the country fared less well. Year-over-year, November volumes at Qingdao, Tianjin, and Dalian fell by 10 percent, 4.7 percent, and 3.9 percent, respectively.

Rounding out the top eight ports, volumes at the eastern port of Xiamen expanded by 7.7 percent to more than 8.7 million TEUs.

The good ports data follow November trade numbers that were better than expected. Customs data show exports rose 0.1 percent in dollar value terms to $19.7 billion following a contraction of 7.3 percent in October. Imports rose 6.7 percent to $15.2 billion, up from a decline of 1.4 percent the previous month.

The trade gains were much stronger when measured in the yuan, which has weakened against the dollar. In yuan terms, exports rose 5.9 percent and imports rose 13 percent.

Despite strong November port, trade, and industrial production numbers, the outlook for weaker trade growth over the medium to long term persists in line with the general trend of decline in the contribution of the industrial sector to GDP growth.

The housing market and automotive sales remain the biggest risks to growth in 2017, according to IHS Markit senior China economist Brian Jackson.

“While the housing correction is already building momentum, it is expected to deepen significantly in the first quarter of 2017,” Jackson said in a research note.

“China’s automotive sector currently accounts for about 1 percentage point of total industrial output growth of 6 percent year-to-date, and about 2 percentage points of retail sales growth of 10.4 percent, so even a modest deceleration in those components will have a meaningful and widespread impact on growth in 2017.”