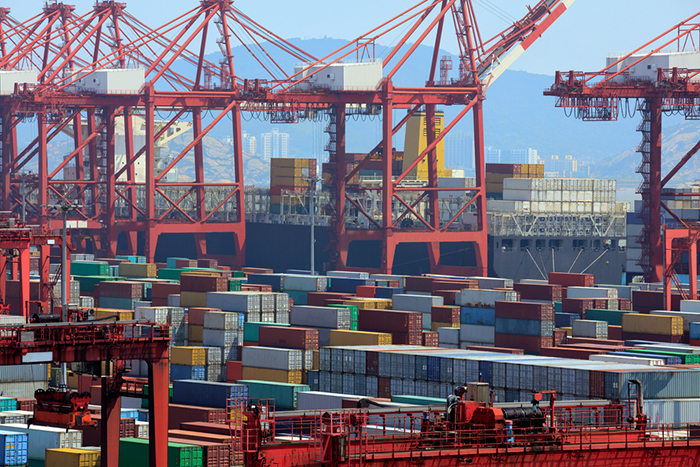 The port of Shanghai, pictured, is the largest in China and the world.

China’s main ports booked strong year-over-year growth in container throughput in August, fueling speculation of a possible trade recovery for the second half of the year in the world’s second-largest economy.

The country’s top eight ports handled a combined 13.65 million 20-foot-equivalent units in August, a rise of 7 percent on the same month in 2015. The growth follows a healthy 4 percent year-over-year rise in volumes handled in July and takes year-to-date growth to just over 2.4 percent after a poor first half of 2016.

The throughput numbers come in the wake of better-than-expected August trade data that indicate a potential pick-up in domestic demand. August imports rose for the first time in nearly two years in value terms, while exports fell by just 2.8 percent, as demand for shipments to the United States, Europe, and Japan showed signs of improvement.

Ports in the northeastern Bohai Rim region performed strongest, with Qingdao, Tianjin, and Dalian handling a combined 3.7 million TEUs, representing a year-over-year rise of 12.9 percent for the region as a whole, according to figures released today by the Shanghai Shipping Exchange.

The port of Tianjin, which was hit by devastating explosions in August of last year, saw year-over-year volumes rise by over a third to 1.2 million TEUs. Throughput expanded by 5.6 percent and 3.4 percent at the other main Bohai Rim ports of Dalian and Qingdao.

Shanghai and Ningbo-Zhoushan, the two main ports in the Yangtze River Delta, handled a combined 5.3 million TEUs, a rise of 7.9 percent on the same month last year.

More than 3.3 million TEUs crossed the wharves in Shanghai in August, a rise of nearly 5 percent and building on a similar year-over-year throughput rise booked at the port during the month of July. Ningbo-Zhoushan, the country’s third busiest port, saw volumes expand by nearly 12 percent in August to just more than 2 million TEUs after an increase of 7.75 percent in July.

Of the top eight ports, only Shenzhen saw a decline in volumes. Traffic there fell 2.2 percent year-over-year to 2.2 million TEUs. Volumes at Guangzhou grew by 7.5 percent.

The Port of Hong Kong, which has endured months of heavily declining volumes, also fared better in August. Preliminary figures from the Hong Kong Maritime and Port Board indicated year-over-year volumes dipped just 2.9 percent to 1.66 million TEUs. One must go back 17 months to February of 2015 to find a smaller monthly year-over-year throughput decline at Hong Kong.

The mainland’s smaller ports were mainly in positive territory as volumes expanded at Yingkou, Suzhou, Nanjing, and Rizhao, the SSE figures show.

The 1.5 percent year-over-year rise in August imports in value terms was the first since October of 2014 and caught China watchers off-guard following a 12.5 percent fall in the previous month.

On the export side August shipments to the US fell marginally in value terms, while those to Europe and Japan rose.

India to allow transshipment cargo from Bangladesh via ocean

How to Improve OTIF: 15 Tips for On Time and In Full Delivery
END_OF_DOCUMENT_TOKEN_TO_BE_REPLACED