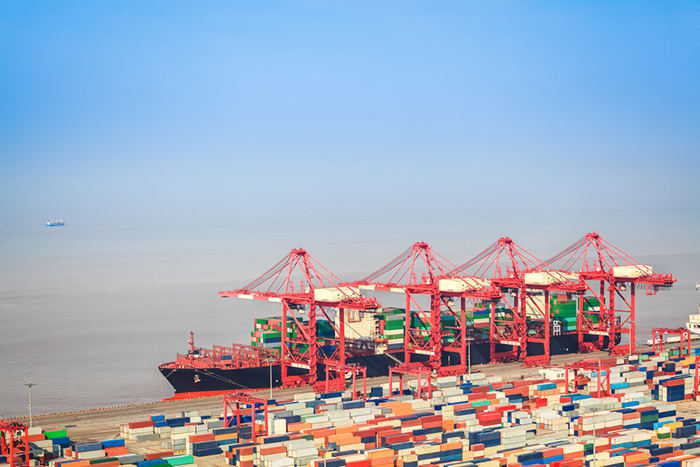 On a year-to-date basis, the top eight ports combined handled slightly less than 23 million TEUs, a drop of 0.8 percent when compared with the 23.2 million handled during the first two months of 2015, according to figures from the Shanghai Shipping Exchange.

The big loser in February was the Pearl River Delta port of Shenzhen where year-over-year volumes dropped 13 percent to 1.6 million TEUs. Shanghai and Tianjin both saw volumes fall, by 0.7 percent and 3.3 percent to 2.6 million and 982,000 TEUs respectively.

February volumes at ports outside of the top eight showed more volatility. Several of the country’s smaller ports booked year-over-year throughput increases in February, including Nanjing (12.8 percent), Yantai (2.8 percent) and Chongqing (4.4 percent). With 62 percent year-over-year throughput growth to 94,000 TEUs, the port of Tangshan continues its climb up the rankings of China’s smaller ports.

The ports of Fuzhou, Zhongshan, Wuhan and Nantong saw volumes fall by 5 percent, 17 percent, 7.3 percent and 25 percent, respectively, while year-over-year container volumes through Rizhao in Shandong province on the Yellow Sea were flat.

Separate figures released by Hong Kong’s Port Development Council show container volumes through the port of Hong Kong continued to slide in February, falling 16 percent year-over-year to 1.2 million TEUs. The large fall brings the cumulative year-over-year decline since the beginning of the year to 12.5 percent. February volumes handled at the Kwai Tsing terminals fell 17.6 percent to 973,000 TEUs and barge traffic fell 8.9 percent to 240,000.

The flat mainland China port numbers follow on the heels of February trade data that makes for depressing reading for those hoping the government hits its 2016 GDP growth target of between 6.5 percent and 7 percent. February exports tumbled 25.4 percent year-over-year while imports fell 13.8 percent.

Analysts said while there is normally a dip in trade volumes after Chinese New Year, the drops this year are larger than normal and another clear sign of the steady slowdown of the Chinese economy.

February manufacturing data also left much to be desired. The official manufacturing purchasing managers index, which measures output from large factories, fell to 49, its weakest level since January of 2009. A PMI reading below 50 indicates a contraction in manufacturing activity.

The Caixin manufacturing PMI, which measures output from smaller, private factories, hit a five-month low of 48.0 in February, down from 48.4 in January. The data show a decline in new orders for eight months in a row and reduced employment.