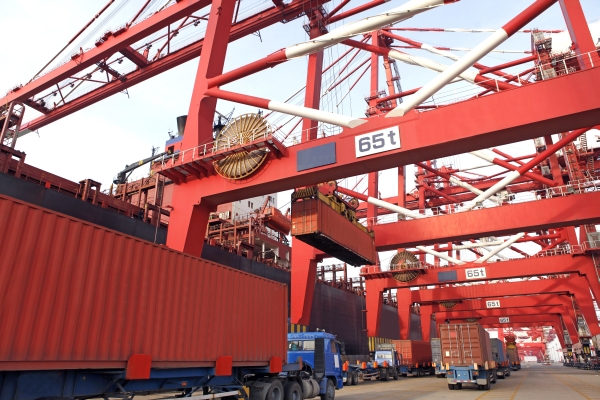 Container ports in northern China are continuing to see far stronger growth than those further south as the economy moves away from its reliance on export-led expansion.

According to the latest throughput numbers, Qingdao, Dalian, Rizhao, Yantai and Lianyungang saw year-on-year growth through November of 8.1, 24, 27, 27.8 and 10.4 percent, respectively. By contrast, Shenzhen, Guangzhou and Shanghai saw expansion of just 1.2, 5.1 and 3.9 percent over the same period.

The divergence in port growth rates reflects structural changes in the Chinese economy, including the migration inland and northwards of manufacturing in search of lower land and labor costs. The deployment of larger container ships on domestic and international routes is also encouraging more coastal and transshipment traffic, while the country’s expanding middle class is boosting domestic demand.

The latest port figures also reveal that hub ports in southern China saw a slight acceleration in throughput as the year came to a close. In November Shenzhen racked up growth of 7.6 percent year-on-year, for example.

While this still only pushed up year-over-year growth to 1.2 percent over the first 11 months, Shenzhen still seems certain to overtake Hong Kong as the world’s third busiest container port this year. Although Hong Kong port's container volumes also showed signs of recovery in November, rising 1.8 percent year-on-year, over the first 11 months throughput fell 4.2 percent to 20.36 million TEUs, some distance behind the 21.3 million TEUs handled at Shenzhen. Hong Kong’s decline this year is attributed to long-term loss of business to Chinese ports located closer to export manufacturing centers and China consumer markets and which are often able to provide lower handling costs.

Even though ports in southern China are seeing far slower expansion rates than they previously enjoyed, overall container handling growth in China is still higher than in most other regions, helping stocks of Chinese port operators outperform their global peers.

Share prices of listed Chinese operators witnessed a sharp rebound in the second half of 2013, said Nimish Mathur, lead equity analyst at Drewry. Cosco Pacific, China Merchant Holdings and Tianjin Port Dev. rose by 20 percent, 19 percent and 38 percent, respectively, compared to drops of 9 percent, 3 percent and 8 percent in the first half of 2013, he said.

The Chinese economy has been reacting well to a stimulus program announced by the government midway through 2013. This focused on boosting small businesses, exporters and railway development. China’s official Purchasing Managers Index recovered from a low of 50.1 in June to 51.4 in November, and monthly import growth has also gathered pace since its low in the middle of this year, Mathur said.

Whether China’s stronger economic performance continues into 2014 remains to be seen. Even though export growth based on official trade data in November was 12.7 percent year-on-year and 8.3 percent in the first 11 months of the year, Michael T. Beer, vice president for Asia Pacific transportation research at Citi Research, believes there will be a strong drop-off in the first quarter of 2014, not least because Q1 2013 data was inflated based on one-time factors. There is a chance that exports could even contract year-on-year in the first quarter of 2014.