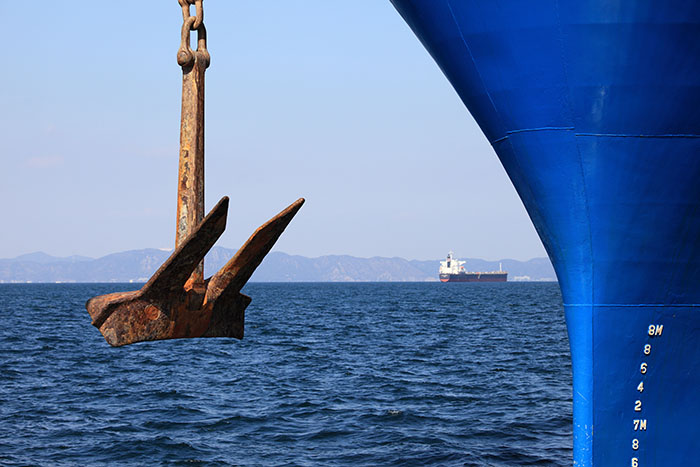 Port congestion at some Asian ports is delaying cargo and has forced at least one carrier to launch a feeder service to transship at less-affected ports.

Carriers said Bangkok, Chittagong, Kolkata, and Shanghai are among the worst affected ports, with berthing delays of about a week. While part of the problem has been caused by growing container volumes, carriers also point to inefficient operations and inadequate infrastructure exacerbated by bad weather, particularly in eastern China.

Ships at anchor (circles) outside the port of Chittagong. Click to enlarge.

“The impact is huge,” said Gavin To, vice-president at Taiwan’s TS Lines.

“Congestion is a big issue at some Asian ports: Bangkok and Chittagong have some of the worst delays,” said Danny Hoffmann, managing director of intra-Asia carrier Gold Star Line.

Unlike most ports, Chittagong and Bangkok ports operate berths on a “first come, first served” basis rather than allow carriers to pre-book a berthing window.

“We are struggling. We do try to rationalize cargoes. It’s a big problem in Bangkok,” Hoffmann told Fairplay.

Delays vary from week to week, depending on the number of ships waiting to berth, said Lim Jing Chee, executive director of ACL, the feeder subsidiary of Singapore’s Pacific International Lines.

The current waiting time at Chittagong is up to a week.

“There are a total of 57 geared and 7 gearless ships registered with the Chittagong Port Authority [CPA] to call at Chittagong. The port simply can’t cope, despite CPA controlling the approval of vessel licenses to call Chittagong,” Lim told Fairplay, a sister product of JOC.com within IHS Markit.

“Productivity is lower” at Bangkok Port “and Port Authority of Thailand is always taking out berths for repairs and the maintenance of equipment such as gantry cranes,” Lim said.

“Bangkok recently upgraded the cranes, which resulted in lower activity because not all of them were fully active,” Gold Star Line’s Landenberg said.

Carriers said the problems only affect Bangkok Port in the city and there are no problems at Laem Chabang or Bangkok Modern Terminal. AISLive data suggest the Bangkok Port has made progress against its backlog, as as only one of the four ships at anchor waiting to enter Bangkok Port the afternoon of May 14 had been waiting for more than a day.

Chittagong has also ordered additional cranes but they have yet to be commissioned, and while geared vessels can also use the general cargo berth and new container terminal at Chittagong, there are still delays.

“The CPA has announced ambitious plans to develop new container terminals plus a deepsea mega-terminal, but these will obviously be further down the road. In the meantime, we see no relief from the present congestion,” Lim said.

As both Chittagong and Bangkok are river ports they are also draft restricted, which adds to the difficulties.

So-called Chittagongmax vessels are limited to a draft of 6.5-7 meters, while Bangkok can handle larger ships up to about 9 meter draft, said Yanir Landenberg, Gold Star Line’s director of finance and administration.

Gold Star Line has also been affected by congestion at Kolkata to the extent it is now seeking alternative ports within a 300 km range of Kolkata to use as an alternative.

Ships at anchor (circles) waiting to call the port of Shanghai. Photo credit: Click to enlarge.

Bad weather in China has recently caused carriers significant problems at Shanghai and Ningbo, but the situation around Shanghai seems to have improved from then. While seven ships were waiting to berth at Shanghai for four days or more during the last bout of congestion in April, AISLive shows only four ships waiting that long as of the afternoon of May 14.

“Yangshan and Waigaoqiao in Shanghai have both been affected and we’ve had to wait five days to berth,” Hoffmann said.

Gold Star Line has been forced to bypass Shanghai to maintain the reliability of its intra-Asia services.

“Where we’ve had three or four services calling at Shanghai, we’ve had to use a single ship to load all the cargo in Shanghai and transship the boxes on to these services elsewhere. This gives us huge pressure and still costs money,” Hoffmann said. “There’s no solution.”

APL said port operations at Waigaoqiao and Yangshan are being delayed by up to at least three days with delayed opening hours for container yards.

“Port congestion is a burden from commercial, financial, operational, and logistic perspectives. The carriers will have to find solutions to compromise for these costs,” Gold Star Line’s Landenberg said.

A version of this story originally appeared on Fairplay, a sister product of JOC.com within IHS Markit.