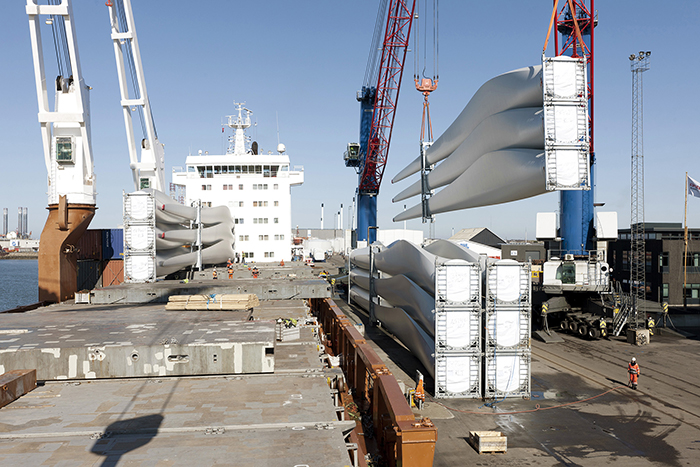 Project forwarders and transportation companies will be the beneficiaries of an upstart of offshore wind energy in the Northeast and mid-Atlantic. Photo credit: Blue Water Stevedoring.

Deepwater Wind, 3 miles off Block Island and 16 miles off the Rhode Island coast, has been the lone beacon of the US’s commitment to offshore wind energy. And for most of its 11 years, the $295 million “farm” was a more potential than promising alternative to electrical power.

Then in December 2016, five General Electric Haliade 150 six megawatt, three-bladed turbines anchored to the floor of the Atlantic Ocean and jutting 70 feet above water silently came to life, putting out 30 megawatts of energy that lit up 17,300 Block Island homes.

The pioneering project was the nation’s first operational offshore wind farm and, as this is written, its only one. With long gaps between the developer’s pipeline and powering up, skeptics were concerned the US offshore wind energy, as an industry rivaling other conventional fuels, was dead in the water. Still, interest never waned.

On Oct. 18, 2018, Copenhagen-based Orsted, the acknowledged leader of the fast-growing global offshore wind energy sector with nearly 25 operational wind farms and 15 projects in the pipeline in six countries, bought a 100 percent equity interest in Deepwater Wind for $510 million from Wall Street investment firm D.E. Shaw & Co. The half-billion-plus buyout virtually assures that Block Island’s innovative wind farm will not sink as a renewable energy concept unable to get commercial traction.

Indeed, the acquisition of developer Deepwater Wind also netted Orsted a portfolio of other wind farm projects off the coasts of Rhode Island, Connecticut, Maryland, and New York with a combined 810 megawatts of estimated capacity and long-term revenue contracts in place. It also includes three US Bureau of Ocean Energy Management offshore leases with 2.5 gigawatt wind energy potential in Massachusetts and Delaware, according to an Orsted press announcement of the deal.

Yet none of the other wind farms in the acquired Deepwater Wind portfolio have any turbines in place, nor are any on order, Carsten Birkeland Kajer, an Orsted spokesperson in Copenhagen, told JOC.com.

The Danish company is no stranger to the US offshore wind sector. Its worldwide portfolio includes development rights for up to 2 gigawatt capacity at the Bay State Wind site off the coast of Massachusetts in a joint venture with Eversource Energy. Orsted also owns development rights for up to 3.5 gigawatts at the Ocean Wind site off the coast of New Jersey and has teamed up with Dominion Energy to construct Coastal Virginia Wind Initiative’s wind farm, said to be the first in federal waters.

Moving decisively, Orsted has contracted with Siemens Gamesa Renewable Energy for two of its 6 megawatt SWT turbines that will generate 12 megawatts of wind power for Dominion Energy’s Virginia customers. Deliveries of the turbines start in 2020, but an operational date for the farm has not been established.

Bloomberg’s New Energy Finance said with its existing US rights and the assets from Deepwater Wind, the newly named Orsted US Offshore Wind venture will be able to deliver “clean [wind] energy to the seven states on the US East Coast that have already committed to build more than 10 gigawatts of offshore wind capacity by 2030.”

Clearly, Orsted, with its infusion of cash, connections, expertise, and experience in overcoming obstacles to offshore wind from Europe to Asia Pacific, is virtually jumpstarting the US offshore wind energy in the Northeast and mid-Atlantic that should directly benefit project forwarders and transportation companies.

Orsted isn’t alone in developing US offshore wind energy. Vineyard Wind is currently slated to be the largest, most powerful wind farm in North American waters when its 84 joint-ventured Mitsubishi Heavy Industries and Vestas V164-9.5 megawatt turbines are installed in a federal 167,000 leased acreage parcel 15 miles south of Martha’s Vineyard and 34 miles off the coast of Cape Cod. Vineyard Wind is scheduled to go live in 2022, and its 800 megawatts will power 400,000 homes, according to Scott Farmelant, the wind farm’s spokesperson.

Vineyard Wind, currently going through the permitting process, will be the “United States’ first utility-scale offshore wind farm,” said Lars Pedersen, CEO of the developer. When operational, Pedersen’s team claims it will cut Massachusetts’ carbon emissions by more than 1.6 million tons a year — the equivalent of removing 325,000 vehicles from state roads.

The funding for Vineyard Wind is coming from the birthplace of offshore wind farming — Denmark. Copenhagen Infrastructure Partners, a fund management company focused on energy, owns 50 percent of the venture. Portland, Oregon-based Avangrid Renewables, which owns wind generation facilities, is the other 50 percent partner.

Even with a slow start, launching an offshore wind farm in the US is a treacherous business venture. Cape Wind, an ambitious 468-megawatt farm, bigger than Block Island and planning to power Nantucket and other tiny Massachusetts vacation areas, canceled its ocean lease after 16 years, bowing to public opposition that included the politically powerful Kennedy and Koch families.

Yet that was years ago, and the support and momentum has grown exponentially. On the West Coast, where land-based wind farms have been churning out energy for decades, the Federal Bureau of Ocean Energy Management recently held successful auctions of parcels on the outercontinental shelf to potential developers. Only in the waters off the Gulf Coast where oil and gas has a vise-like grip on the energy sector, is offshore wind farming not seen as a threat to the existing energy supply chain, officials say.

“Offshore wind farms are the very definition of an emerging market today,” said Brent Patterson, senior vice president of global markets for Blue Water Shipping in Houston. “For the last three to five years, we’ve had a lot of frustration with permits and various government encumbrances in getting projects kicked off. Now we’re seeing projects launched and newly funded and approved projects in the pipeline.”

As interest in US offshore wind farming rises, developers will find themselves scrambling to stake out sites for their turbines, which can tower 700 feet, Patterson predicts. “We were way, way behind the curve compared to the North Sea market because we were slow to change [and] had all the environmental constraints, permitting processes, and high installation costs.

“Technology had to catch up and make it more constructive. Adding to the expense was a lack of vessels and vessel operators in the US market because they were deployed elsewhere. Then you have the Jones Act where an American-flag vessel had to be used to deliver [project] cargoes in US waters,” Patterson said.

Because of a shortage of ships and capacity, he said, a US offshore wind farm developer “has to engage ships very early on, years ahead of the project installation so you can identify the most suitable [port] facilities with the adequate infrastructure. Or maybe it necessitates [port] construction or it doesn’t have adequate ground-bearing capacity or a deep enough draft. There are plenty of variables when you are talking about getting wind turbine components to a port and [anchored] in the sea.”

The logistics alone differ for US offshore wind compared with land-based farms. Patterson said Blue Water brings all the materials to the shore bases, does the erection and general assembly of the turbines, and loads them onto jack-up feeder barges that transfer to European installation vessels, depending on jurisdictional waters.

He predicts that with all the interest in US offshore wind farming, even with the long lead times required in the project cargo supply chain, times will be compressed. “It took a year and a half to install only six windmills at the Block Island wind farm. You will now see much larger projects go much quicker as everyone is getting used to more streamlined installations. Direct execution timelines are shorter today,” the project shipping executive said.

But they are not necessarily smoother. “We’re now entering a very tumultuous shipping market because oil and gas prices and shipments are on the rise,” Patterson contends. “[Vessel] capacity is tight. The IMO 2020 [low-sulfur fuel] regulations and the tighter breakbulk shipping market will have an impact on the ability to get wind cargoes shipped at prices that were budgeted a year and a half ago. Plus, we’re just breaking the seal on the market for US offshore wind, and [all] costs are more expensive than they are in Europe.”

Despite developer zeal, the Blue Water wind logistics executive does not see a boom across coastal US for wind farming. “It’s the Northeast and Eastern Seaboard. Nobody is looking out much farther than that. I would see lease concessions in the Gulf of Mexico, and we’re all talking about it but, again, the oil and gas market is still strong in those waters.”