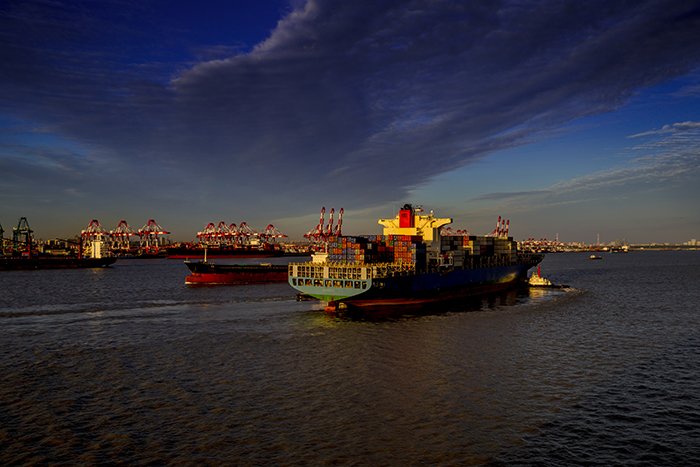 The new alliances and bad weather have made it increasingly difficult for ships calling at Shanghai to stick to their schedules.

Average delays for container ships calling at Shanghai’s Yangshan deepwater port have increased by more than 40 percent since the beginning of April, and forwarders are advising their customers that the congestion could last until mid-May.

The average delay per vessel from April 16 to April 18 has grown by 42 percent to 53 hours compared with week before, and by 41 percent compared with the first week of April, CargoSmart analysis shows. Dense fog has exacerbated the delays.

Forwaders are having to manage the Shanghai delays, and Joerg Hoppe, DB Schenker director and head of ocean freight for North and Central China, said he was expecting the situation to continue until mid-May.

Three factors had combined to cause the congestion, Hoppe said. A large number of containers from Hanjin Shipping, which collapsed last year, remained in the port taking up space. A second reason was the service and terminal changes that accompanied the alliance re-shuffle after the Ocean Alliance, THE Alliance, and the 2M plus Hyundai Merchant Marine (HMM) launched in April 1, and the third reason Hoppe gave was capacity mismanagement among the major terminal operators within Yangshan, where one operator has idle capacity and the another is buried in boxes and ships.

The Shanghai International Port Group has been trying to address the capacity issues and has been shifting some port calls from Yangshan to its other terminals in the city. However, as the busiest container port in the world, the sheer volume of boxes moving through the terminals are difficult to manage even when everything is going right.

Container ships, in blue, outside Yangshan port as of 7:15 AM EST. Credit: AISLive/IHS Markit.

A customer advisory by logistics operator Logwin said the congestion was affecting mainly the Asia-Europe, trans-Pacific, and Asia-Australia trade lanes. The third-party logistics provider said the delays in arrivals and departures were worsening since the period prior to the Easter holidays.

Logwin told customers that the delays were the result of overbooking by most carriers, so the overflow of laden containers had to stay gated-in at the terminal until the next departure, which reduced the turnover and efficiency of terminal operations and led to a shortage of empties at the inland depots.

There were other contributing factors to the congestion, Logwin advisory said. Weather conditions in Shanghai and at previous calling ports in North China forced carriers to delay and change their berthing plans. The Shanghai International Port Group upgrading its systems in early April has also played a role, as has port call adjustment since early April by the new allianices. The alliances' deploying with bigger vessels has lead to growing handling time per vessel at the terminal.

Logwin said in order to keep the vessel sailing schedules, some carriers had made a last-minute decision to omit Shanghai in order to catch up with the next port call. But for those containers gated in already, they were required to remain in the terminal for the next vessel, “making the congestion situation even worse.”

Shanghai port authorities are trying to mitigate the delays but with general rate increases to be announced on May 1, many shippers are trying to get their containers loaded before the price goes up, so there is unlikely to be any improvement until well into next month.

There has been a growing imbalance in container volumes that could be the result of shipper panic over the regrouping shipping alliances, which caused them to make bookings earlier to secure the space.

Even though there were usually “quite a lot vessels” waiting outside Shanghai Port, in the past few days CargoSmart had found that the numbers were rising sharply to the more than 100 recorded earlier this week.

A container line executive at a large Asian carrier told JOC.com that congestion at Yangshan appeared to indicate that the port was struggling with the increased volumes and bigger vessels that have been assigned to the terminal.

“This affects primarily Asia-Europe and trans-Pacific sailings, with knock-on effects in all other ports as the big vessels have less flexibility to switch berths and terminals in the subsequent ports,” he said.

The supply chain head for a major European shipper said the congestion had also spread to the port of Qingdao not far north of Shanghai. “But so far it all still works and we are lucky,” he said.

The Ocean Alliance, THE Alliance, and the 2M plus HMM launched on April 1, completely redrawing the existing vessel sharing agreement structures. These VSA were in addition to various independent carriers including newcomer SM Line that also began its new trans-Pacific service last week.

Compared against the peak season deployment of summer 2016, total vessel capacity planned for this summer will be 2 percent higher, according to industry analyst Alphaliner. At the same time, the number of deployed ships is set to fall as carriers continue upgrading services to larger vessel sizes.