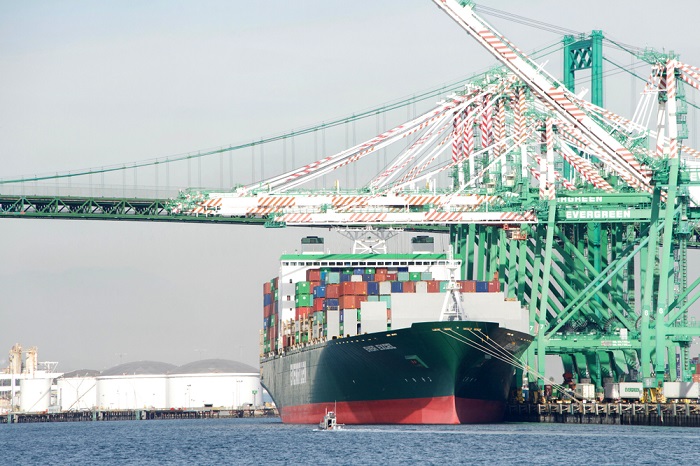 “There have been record high levels of imports over the past several months, primarily due to raised inventories ahead of expected tariff increases,” said Ben Hackett, founder of Hackett Associates. (Above: The Port of Los Angeles.) Photo credit: Shutterstock.com.

Having imported spring merchandise earlier than usual because of tariff fears, retailers will back off slightly in their import demands this month and next, and imports in the first half of 2019 will be lower than normal, according to the National Retail Federation (NRF).

“With the holiday season behind us, the immediate pressure to stock up on merchandise has passed, but retailers remain concerned about tariffs and their impact on the nation’s economy,” Jonathan Gold, the NRF’s vice president for supply chain and customs policy, stated in this month’s Global Port Tracker published by the NRF and Hackett Associates.

Imports in calendar year 2018 were projected to total 21.6 million TEU, an increase of 5.3 percent from 2017, which was a record year. Therefore, the projected slower start in the first half of 2019 indicates that a sizable amount of spring merchandise was front-loaded in 2018.

Import movements in February and March naturally vary from year to year based on the Lunar New Year celebrations when factories in Asia close for a week or two. The holiday this year falls on Feb. 5. However, retailers’ importing strategy is marked by uncertainty because of Trump administration tariffs affecting more than $200 million of imports from China. The 10 percent tariffs last autumn resulted in an early peak season for the holidays, with imports surging in July. The administration’s threat to raise the tariffs to 25 percent on Jan. 1 produced a front-loading of spring merchandise, but the agreement to postpone the tariffs until March 1 relieved some pressure on retailers to continue the front-loading. Negotiations between the United States and China are under way this week.

“There have been record high levels of imports over the past several months, primarily due to raised inventories ahead of expected tariff increases,” said Ben Hackett, founder of Hackett Associates.

The melding of peak-season imports with spring merchandise has resulted in elevated spot rates in the eastbound Pacific since summer. The Freightos Baltic Index published on Tuesday stated that the spot rate from China to the West Coast jumped 16 percent this week to $2,003 per FEU, and the East Coast rate increased 13 percent to $3,137 per FEU. The spot rates could increase further in the coming weeks if negotiators are not able to end the trade war soon.”If the tariffs go back on, prices will go up again,” Freightos stated. The West Coast spot rates this week are 37 percent higher than in Week Two of 2018, and the East Coast rate is up 32 percent.