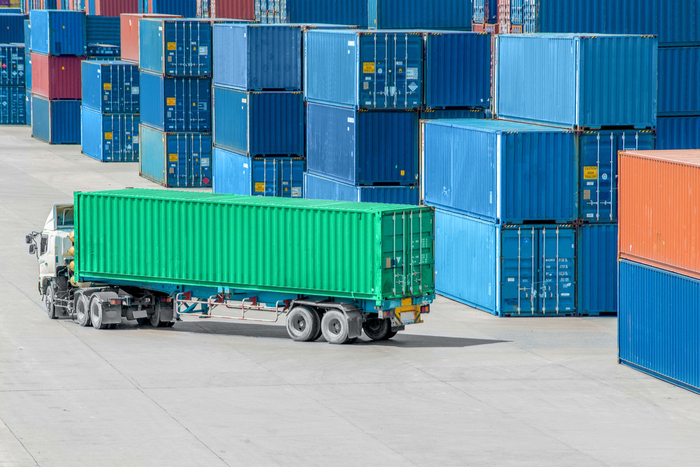 Ports hope to head off equipment dislocations such as occurred in the first quarter when terminals struggled to return empty containers to Asia. Photo credit: Shutterstock.com.

US ports and forwarders warn that a coming plunge in import volumes will be even sharper than they feared, although their concerns of a bottleneck building from a last wave of Asia imports hitting terminals filled with containers left due to COVID-19 lockdowns are fading.

US port directors and forwarders tell JOC.com they anticipate rapidly declining import volumes beginning in mid-May and extending well into June as additional blank sailings announced by trans-Pacific carriers will reduce capacity by about 25 percent to the West Coast and 20 percent to the East Coast.

However, the ports do not anticipate equipment dislocations, such as they feared would take place in the first quarter when terminals were struggling to return empty containers to Asia. Port executives say imports in the coming few months are likely to decline by double digits, so there will not be a surge of containers that must be returned to Asia when they are emptied. Marine terminals and ports have added storage space for non-essential imports, alleviating any potential cargo flow issues.

The latest forecast is in stark contrast to just a week ago, when ports were expecting an intense — albeit short — spike in imports beginning in mid-May as vessel space in Asia began to fill up. However, carriers have suddenly announced additional blank sailings as orders for back-to-school merchandise are not as extensive as in past years. Back-to-school is the second-busiest period in the eastbound trans-Pacific after the peak holiday shipping season.

US imports dropped 9.3 percent in the first quarter year over year, according to PIERS, a JOC.com sister company within IHS Markit. Noel Hacegaba, deputy executive director of administration and operations at the Port of Long Beach, expects the second quarter to be even worse. “We’re bracing for a brutal second quarter,” he told JOC.com.

The 2M Alliance of Maersk Line and Mediterranean Shipping Co. successfully avoided terminal congestion in Los Angeles-Long Beach last month by upsizing four vessels from about 14,000 TEU in capacity to between 19,000 and 23,000 TEU to vacate hundreds of empty containers back to Asia and open space for more imports.

Several terminal operators also contributed to the effort to maintain fluidity in the largest US port complex by opening up on-terminal space for storage of non-essential imported merchandise. Warehouses in Southern California have been forced to hold on to non-essential goods so supply chains could be freed up to deliver medical supplies and other essential products for hospitals and health care workers fighting COVID-19.

However, the expected surge in imports that normally occurs this time of year has failed to materialize. Retailers are canceling purchase orders for summer and back-to-school merchandise due to flagging consumer demand and uncertainty as to whether students will return to the classrooms in the fall or continue to study from home.

The first quarter’s drop in imports resulted from the normal decline in production during the two-week Lunar New Year holidays in Asia, followed by extended factory closures in China due to the coronavirus disease 2019 (COVID-19). The anticipated Q2 decline in imports will be due entirely to the impact of the COVID-19 crisis on consumer demand in the United States.

“Volumes will drop. Volumes are going to be way down,” said an executive with a large non-vessel operating common carrier (NVO).

Normally, back-to-school merchandise is on store shelves right after the July 4th holiday. A transportation consultant and former logistics manager at a national chain said retailers this year are ordering normal quantities of only those items that students will need regardless of whether the schools reopen, such as pens, notebooks, and calculators. Accessories such as backpacks and apparel that students purchase when they prepare to return to the classroom have not been ordered in large quantities, he said.

April increase, followed by May decline

Staff who addressed Thursday’s meeting of the board of directors of the Port Authority of New York and New Jersey said April’s cargo volume will rebound modestly from a 22 percent decline in March from March 2019.

However, port managers are holding off on projecting peak-season import volumes because many retailers have yet to finalize orders for holiday merchandise. The peak season in the eastbound trans-Pacific normally runs from August through October. “That’s the question of the day,” Hacegaba said.

Kevin Krause, vice president of ocean services at SEKO Logistics, said vessels leaving Asia the past few weeks have been relatively full, although not overbooked. Imports included spring and summer shipments that were ordered earlier this year but had been interrupted by production problems in Asia due to the impact of COVID-19. Medical supplies and other essential cargoes needed in the US to combat the coronavirus contributed to the April rebound in imports.

However, after increasing in April, import volumes are projected to decline in May and June as consumer demand for non-essential goods will likely remain weak, Krause said. “We expect these types of peaks and valleys to continue,” he said.

Carriers apparently anticipate a similar scenario, based on the blank sailings they have announced through mid-June. “North American capacity will be reduced by 25 percent in the coming weeks to the West Coast and 20 percent to the East Coast,” said Alan Murphy, CEO of Sea-Intelligence.

Import volumes should pick up later in the summer as holiday merchandise is shipped, but unless retailers place substantial orders with Asian factories soon, imports for the peak season will be much weaker than in recent years.

“I’m not expecting a peak season this year,” the executive at a large NVO said. He projected total US container volume will be down 11 percent year over year in 2020, similar to the 12 percent drop in container trade in the recession year of 2009.

Although the major US gateways do not anticipate serious equipment disruptions in the coming months, they are consulting with retailers, carriers, NVOs, terminal operators, truckers, and equipment providers to ensure the entire port community is prepared to handle the unpredictable ebbs and flows in volume.

“We’re talking to our supply chain partners,” Hacegaba said. “We’re all taking precautionary measures and are engaged in contingency planning.”