US imports to decline later this year if trade war starts

US imports to decline later this year if trade war starts 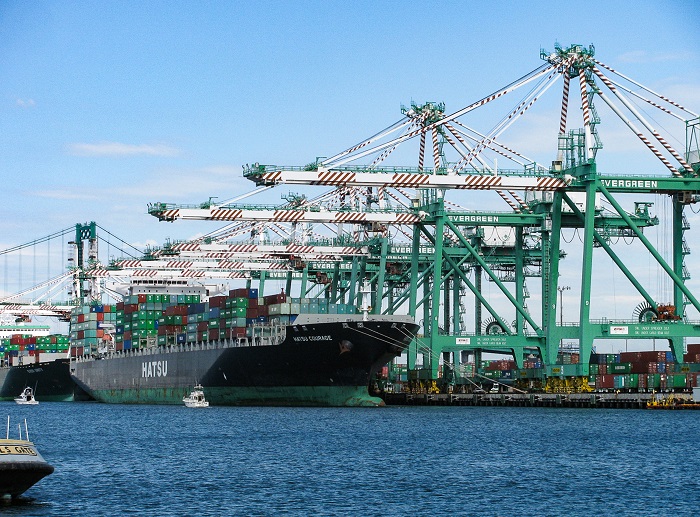 Containerized imports this month will decline slightly from March 2017, but even bigger drops could occur later this year if the United States becomes embroiled in an international trade war following the imposition of stiff tariffs on steel and aluminum.

This warning in the Global Port Tracker, which is published monthly by the National Retail Federation and Hackett Associates, comes at a time when US imports are holding up relatively well during the traditional slow shipping period that follows Chinese New Year. The Lunar New Year celebrations this year began on Feb. 16. Many factories in Asia shut down for at least a week, and the drop in imports is starting to be noticed at US ports.

Spot rates in the eastbound Pacific provide an indication of the strength of containerized imports. Spot rates from Asia to the US East Coast at Lunar New Year were 14.4 percent higher than six weeks prior, compared with falling 8.4 percent in 2016, according to Drewry Shipping Consultants. Imports, and therefore spot rates, drop in the weeks following the lunar New Year, when factories in Asia close for a week or two. This development indicates that imports so far this year have been strong.

Although the spot rates and volume numbers for the six-week post-Lunar New Year period are still playing out, the spot market rates that carriers charge in the eastbound Pacific are so far declining at a measured pace.The spot rates this week to the East Coast dropped 8.2 percent from the previous week, and the West Coast rate declined 8.7 percent. Last week, the first week to experience the effects of Lunar New Year, the East Coast rate declined 12 percent and the West Coast rate dropped 11 percent compared with the previous week.

US imports are expected to decline further in the coming weeks as the full impact of the factory closures in Asia is realized. Historical spot-rate statistics bear this out. During the six-week period following previous Chinese New Years, rates to the East Coast dropped 20.6 percent in 2017, 29.5 percent in 2016, and 20.1 percent in 2015, spot rates show.

Nevertheless, Global Port Tracker is bullish on imports, barring a trade war. It projects a decline of 1.8 percent from March 2017. March will reflect most of the post-Chinese New Year decline in exports from Asia. The eastbound Pacific should return to normal in April, and Global Port Tracker projects imports will increase 4.7 percent from April 2017. Year-over-year imports are projected to increase 2.5 percent in May, 4.7 percent in June, and 4 percent in July. First-half 2018 imports are projected to increase 4.1 percent over the same period last year.

The Global Port Tracker projections do not address the as yet unknown impact of the steel and aluminum tariffs announced Thursday by the Trump administration. If there is a trade war that causes consumer prices in the United States to increase, imports to drop, and US exports to decline as trading partners respond with tariffs of their own on US exports, imports later this year will suffer.

“With steel and aluminum tariffs already in place, new tariffs on goods from China being threatened and the ongoing threat of NAFTA [North American Free Trade Agreement] withdrawal, we could very quickly have a trade war on our hands,” said Jonathan Gold, NRF vice president for supply chain and customs policy.