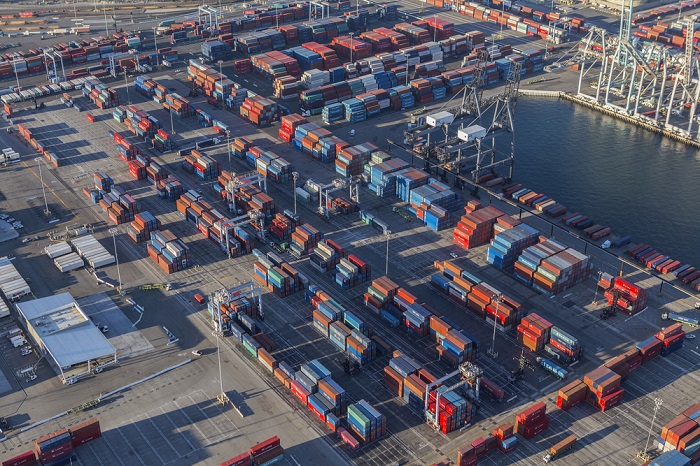 “It’s getting a little bit tighter out of China,” a non-vessel-operating common carrier said. (Above: The Port of Long Beach.) Photo credit: Shutterstock.com.

Vessel space in Asia is starting to get tighter, as evidenced by the second straight week of spot-rate increases in the eastbound Pacific, and importers are bracing for even tighter capacity and higher rates in the runup to Lunar New Year celebrations starting Feb. 5.

“It’s getting a little bit tighter out of China,” a non-vessel-operating common carrier (NVO) said Thursday. Although carriers have dropped their peak-season surcharges, some have filed for $400 general rate increases (GRIs) effective Jan. 1, he said. Also, three container line executives have told JOC.com vessels are leaving Asia with high utilization rates. One of the executives remarked that the early December dip in spot rates didn’t truly reflect slot tightness that has become more apparent in the last two weeks.

Containerized imports since summer have been at record and near-record levels, but are likely to begin showing year-over-year declines beginning this month, according to the Global Port Tracker, which is published each month by the National Retail Federation and Hackett Associates. Imports increased 14 percent in November and an estimated 6.1 percent in December, but are year-over-year imports are projected to decline 2.1 percent in January, 1 percent in February, and 1.7 percent in March, according to the Global Port Tracker.

The past two weeks the East Coast spot rate has increased 13.4 percent to $3,119 per FEU, while the West Coast rate increased 9.6 percent to $1,933 per FEU, according to the Shanghai Containerized Freight Index, which is published under the JOC Shipping & Logistics Pricing Hub.

The East Coast spot rate on Friday was 4 percent higher than last week, and the West Coast rate was 2.7 percent higher. This was the second straight week that rates increased from the normal seasonal lull in December. Spot rates are expected to increase into early February before many factories in Asia close for at least a week or two for the Lunar New Year celebrations.

However, there is greater uncertainty this year as to how long the factories will remain closed and what the post-Chinese New Year recovery will look like. Retailers and manufacturers the past two months front-loaded imports that normally would have moved in January because of the US-China trade war. The Trump administration’s 10 percent tariffs of last autumn were scheduled to increase to 25 percent on Jan. 1. However, the two administrations agreed to postpone the tariffs and China’s counter-tariffs until March 1 in an attempt to work out a settlement.

Freightos, in its weekly Baltic Index update, said the tariff postponement in early December caused spot rates to decline for a few weeks. US retailers and manufacturers can take solace from the fact that the current rates are down from the Nov. 11, 2018, high of $3,778 per FEU to the East Coast and $2,582 to the West Coast, but spot rates should pick up in the coming weeks.

It is difficult to predict how tight vessel capacity leaving Asia will be because the amount of freight that was front-loaded last month has not been quantified. Freightos noted that the front-loading left some importers overstocked. Anecdotally, warehouse space in Southern California, which totals about 1.8 billion square feet, is full. This is causing imported containers to back up at the 12 container terminals in Los Angeles-Long Beach. “We don’t have any space on-dock or off-dock,” Ed DeNike, president of SSA Containers, told JOC.com last week.

One school of thought is that owing to the front-loading of spring merchandise, factories in Asia may remain closed for more than the customary one to two weeks. Another view is that owing to the uncertainty over the potential imposition of 25 percent tariffs on March 1, retailers and manufacturers will take no chances and will import as much freight as they can when the factories reopen later in February.

If a last-minute surge develops, carriers could be expected to deploy extra-loader vessels to meet the demand. More than two dozen extra-loaders were deployed to Los Angeles-Long Beach from late autumn through the end of the year. Los Angeles reported this week that only two extra-loaders are scheduled for January, while Long Beach said the six terminals there have no extra-loaders scheduled at this time.

The extra-loaders piled approximately 90,000 containers on top of imported containers that terminal operators were struggling to handle from their regularly scheduled weekly services. Since local distribution warehouses were also full, the imports arriving during the past two weeks could not be vacated quickly enough to accommodate newly arrived shipments. Terminal operators told truckers not to return empty containers because there was no space for them. Warehouses in Southern California began parking imported containers at their facilities and at trucker yards in the region, taking the chassis they were mounted on out of service for two or three weeks. “We have an immense amount of empties,” said Fred Johring, president of Golden State Logistics.