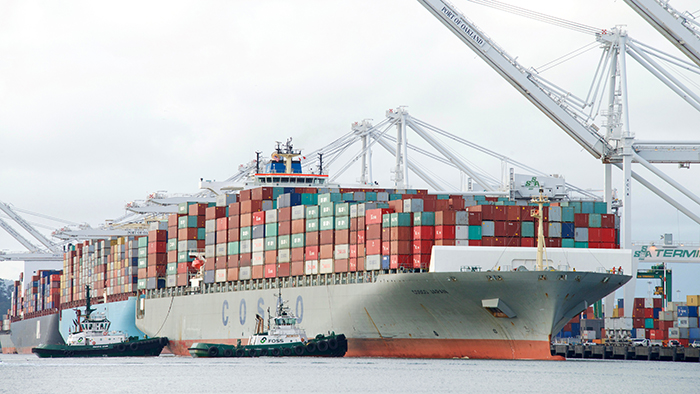 The strength of recent eastbound trans-Pacific spot rates has emboldened carriers to push for higher 2017 contract rates, but it's unclear what success the carriers will have.

US importers setting up meetings around the 17th Annual TPM Conference are getting hit with a barrage of mixed signals, complicating their appraisal of just how much power they’ll have in trans-Pacific service contract negotiations. They know carriers are still limping after deep 2016 losses, some $13 billion for just 12 of the top 25 operators in the third quarter, according to analyst Dyanmar.

Shippers also have to square knowing that carriers don’t want another disastrous round like last year, when major shippers walked away with rates as low as $750 per 40-foot container from China to the US West Coast. But with containerized trade growth slowing and more ship capacity coming online despite the stalling of new orders, just how much leverage will carriers have?

The industry should at least be prepared for potentially higher rates even if the myriad of moving gears makes it difficult to discern what could happen.

Trans-Pacific carriers are stretched far beyond disappointing service contracts. Rates from Shanghai to the West Coast were down 15 percent last year versus 2015, and were down 33 percent to the East Coast, based on a recent BIMCO analysis of the Shanghai Containerized Freight Index. Overall rates on routes tracked by the SCFI were down 7 percent. Trans-Pacific contract rates for some shippers were in the low-$700-per-FEU range, according to a JOC survey of importers and carriers, a historic low. Some carriers mitigated such deals by dividing a shipper’s minimum quantity commitment by 52 weeks and declaring any weekly volume above that to be out of contract and moving at a higher rate.

Still, it was a forgettable year for the carriers, while many logistics directors can claim to have saved their companies millions of dollars, though hopefully for their sakes with the caveat that freight rate gains from one year to the next may not be repeated and could be reversed.

Will this year be any different? On certain levels, the possibility can’t be ruled out. Spot rates are up substantially in recent months, which, if sustained, can give the carriers an edge in negotiations. The latest reading of the SCFI to the West Coast was $2,167 per FEU, up more than 50 percent since early December and nearly triple the low $700s level of last spring. Ships are being returned to non-operating owners at a rapid pace, sinking the fortunes of owners and sending charter rates lower. This may be tactical or evidence of greater long-term discipline by carriers.

“Over the last few years, the industry has indeed been keeping a very close eye on issues related to oversupply in the market and making necessary capacity changes,” Stephen Ng, director of trades for Hong Kong-based OOCL, told The Journal of Commerce.

According to recent JOC reporting, the strength of eastbound trans-Pacific spot rates has emboldened carriers to push for higher 2017 contract rates, in the range of $1,600 to $1,800 per 40-foot-equivalent unit to the West Coast and about $2,450 per FEU to the East Coast.

But it’s unclear what degree of success the carriers will have. For example, Samsung’s 2017 contract rate, which took effect in January, is just slightly up on the prior year, and the company doesn’t see major upward movement in the near term. “It is not easy to predict, but the rate is stable at the moment, and we do not anticipate a rapid increase any time soon,” Diane Kim, vice president with Samsung SDS, told JOC at the company’s Seoul headquarters.

She said Samsung has taken notice of increasing spot rates, but is unsure of the long-term impact. “We see this happening already in the spot market, where rates are up by 30 percent or 40 percent, but there is still overcapacity in the market, and it is going to take some time before there is real balance in supply and demand,” Kim said.

Partly explaining the assertiveness of carriers in returning chartered ships is the continuing influx of new capacity. New orders are drying up — there were 72 new ships ordered in 2016 versus 232 in 2015 and less than 10 ordered in the fourth quarter, according to IHS Markit, but previously ordered tonnage is arriving at a rapid pace. Alphaliner reported in January that tonnage delivered in 2017 will be twice the forecast scrappings this year. Global fleet capacity growth will be 3.4 percent this year, which it said “will prolong the overcapacity and further delay the recovery in the container shipping market.”

New ships will deployed against a still-slowing world trade picture. By withdrawing from the Trans-Pacific Partnership and stating its intent to renegotiate the North American Free Trade Agreement and other trade deals, the Trump administration appears set to reverse decades of US trade liberalization policies. This occurs against a backdrop of slowing trade; global trade grew an average of 6.5 percent between 1986 and 2008, but slowed to an average of 3.2 percent between 2012 and 2015, and is predicted to expand just 1.7 percent in 2016, according to the World Trade Organization. Containerized volumes at the top eight ports in mainland China, long the driver of container trade growth, rose just 3 percent last year versus 3.7 percent in 2015.

Permalink Submitted by ferrullig@minds... on Jan 28, 2017 11:25AM EST
Those Samsung rates wouldn't by chance be from a Korean carrier would they?
Maritime News›Trade Lanes›Trans-Pacific
Maritime News›Container Lines