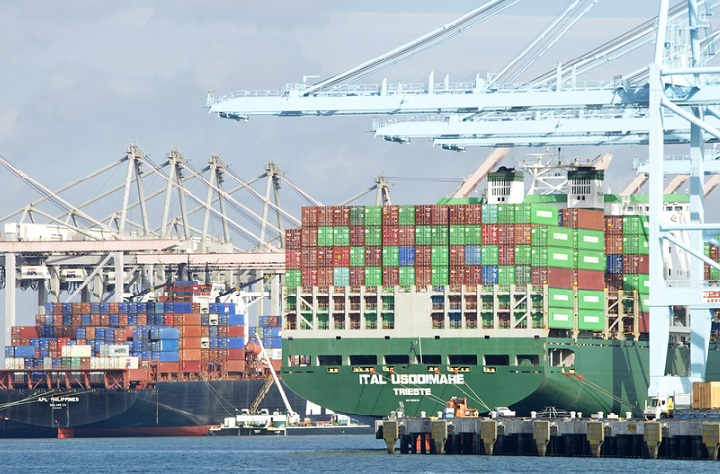 Having learned in 2018 to manage capacity through blanked sailings and responding quickly with extra-loaders when demand increased, carriers likely will respond accordingly this year, said Bruce Chilton, vice president of trade management at Ascent Global Logistics. (Above: Ships at the Port of Los Angeles.) Photo credit: Shutterstock.com.

After enduring extreme rate volatility in 2018, carriers and importers in the eastbound Pacific will enter service contract negotiations cautiously this spring, seeking to achieve mutually agreeable rate levels that truly reflect supply and demand in the largest US trade lane.

“There will not be a return to last year,” when annual service contract rates were, from the carriers’ perspective, disappointing and unacceptably low at about $2,200 per FEU to the East Coast and $1,200 per FEU to the West Coast, predicted Lawrence Burns, senior vice president of trade and sales at Hyundai America Shipping Agency. Carriers responded by reducing capacity by 6 percent to the West Coast and 1.3 percent to the East Coast.

When imports increased strongly last summer, due in part to front-loading of shipments to get ahead of the Trump administration’s tariffs on China, spot rates soared by more than $1,000 to each coast and remained high through the peak season as the threat of an increase to 25 percent tariffs loomed on Jan. 1 this year.

Michael Klage, solutions director at TOC Logistics International, said carriers and importers learned from last year’s roller-coaster ride that started with low service contract rates in May and led to unusually volatile spot rate adjustments later in the year when carriers managed capacity through ad hoc blank — or canceled — sailings, or by removing entire strings from service. As a result, Klage doesn’t expect beneficial cargo owners (BCOs) to stand firm on “no general rate increase” clauses in their 2019-2020 service contracts as they did last year.

Beginning last summer, carriers, individually and through their vessel-sharing alliances (VSAs), increased capacity through deployment of single-voyage “extra-loaders,” or reduced it through blank sailings. Carriers last year blanked 26 sailings, almost double the amount of the previous two years combined, according to SeaIntelligence Consulting. Spot rates stayed above $3,500 per FEU to the East Coast and $2,500 to the West Coast through the peak season, about 80 percent higher than in 2017.

Carriers and BCOs were caught off guard last year by the months-long trade war between the Trump administration and China, but unexpected and disruptive events seem to be an annual occurrence now in the trans-Pacific trades, Burns said. In 2014-2015, there were labor disruptions during West Coast longshore contract negotiations. Hanjin Shipping went bankrupt in 2016, reducing capacity by about 6 percent. Carriers in April 2017 replaced four VSAs with three larger, more powerful alliances. Last April, the three Japanese carriers merged into a single line, Ocean Network Express. Although no one can predict what will happen in 2019, recent history tells us, “There is always a disruption,” Burns said.

Demand in the first quarter of 2019 is expected to be muted somewhat by the front-loading of spring shipments in November and December because of the threat of the 25 percent tariffs on Jan. 1, but the extent and timing of the fall-off is uncertain. The Global Port Tracker, published monthly by the National Retail Federation and Hackett Associates, predicted that imports in January will be up 2.8 percent from January 2018, February imports will increase by only 0.4 percent, and March imports will increase by 3.3 percent from March 2018.

Based on the steady upsizing of vessels on all-water services from Asia to the East Coast, carriers in 2018 anticipated more rapid growth there than on trans-Pacific services to the West Coast, and that occurred. In the first nine months of 2018, East Coast imports increased 6.3 percent, according to PIERS, a sister division of JOC.com. West Coast imports grew 3.3 percent.

Carriers have steadily increased the size of vessels on East Coast services and accelerated the upsizing since 2017, according to SeaIntelligence. The average vessel size by October last year was 8,600 TEU, up 9 percent from December 2017. The average vessel size to the West Coast increased more slowly to 8,200 TEU in October, although carriers are increasing the maximum size of the vessels more rapidly. By October, 19.1 percent of the vessels calling at West Coast ports were 12,000 TEU to 15,000 TEU, compared with 14.8 percent to the East Coast, according to SeaIntelligence.

Having learned in 2018 to manage capacity through blanked sailings and responding quickly with extra-loaders when demand increased, carriers likely will respond accordingly this year, said Bruce Chilton, vice president of trade management at Ascent Global Logistics. The extra-loaders, however, are geared to meet the needs of the largest retailers, so smaller shippers in various trade lanes may not benefit from those additional sailings, Chilton said.

“They don’t always hit the right lane,” he said.

The service contracting environment this year will be especially confusing because of the International Maritime Organization’s (IMO's) low-sulfur fuel requirement under the MARPOL agreement that carriers face throughout their global operations. Beginning Jan. 1, 2020, the sulfur limit in bunker fuel will fall from 3.5 percent at present to 0.5 percent. The estimated increase in the industry’s fuel costs of $13 billion to $15 billion a year will translate to extra costs per TEU booked on all ships, although carrier estimates vary greatly. The general range predicted is from more than $100 per TEU to more than $300 per TEU. The impact per cargo unit is less draconian, with SeaIntelligence projecting the additional cost to a $150 television set to be 39 cents.

The low-sulfur fuel will impact 2019 service contract negotiations, which run generally from May 1 through April 30, 2020. There is no industry model to dictate how the increased fuel costs will affect service contracts, such as including the cost in an all-inclusive rate or calculating the increased cost in a floating bunker fuel surcharge. BCOs and non-vessel-operating common carriers (NVOs) said carriers are raising the issue informally, but the pressure on each carrier to determine a policy should build as the Jan. 1, 2020, deadline approaches.

Another reality of today’s shipping environment is the poor schedule integrity in the major east-west trades resulting from problems that Asian ports, especially Shanghai, have in handling mega-ships that now exceed 20,000 TEU. Although those large vessels are confined to the Asia-Europe trades, those same Asian terminal operators that experience delays in handling the 20,000-TEU-plus vessels are simultaneously working 10,000-TEU to 14,000-TEU ships operating in the trans-Pacific. On-time performance in the east-west trades last year ranged from 30 to 70 percent, according to SeaIntelligence.

Alan McCorkle, vice president of Yusen Terminals in Los Angeles, said terminal operators must build late arrivals of two to three days into their operational plan to be safe. Vessels were also late leaving Asia last year because of persistent fog in Shanghai and typhoons in Asia. Problems related to late vessel arrivals reverberate throughout the supply chain, especially for BCOs that ship to inland destinations via intermodal rail, Klage added. The issues are especially acute in Los Angeles-Long Beach, but East Coast gateways such as Norfolk also are affected, Klage said.

Some carriers have responded to the growing supply chain complexity in the trans-Pacific by offering services that guarantee performance at the marine terminal as well as on the ocean voyage, for a premium price. APL’s Eagle Express X (EXX) service from Ningbo to Los Angeles, launched on Aug. 2, guarantees customers an 11-day transit (versus 12 days for most trans-Pacific services to the West Coast) as well as chassis availability and dedicated in-out gates in Los Angeles, said Sean Pierce, president and CEO of Fenix Marine Services and P5 Infrastructure.

Matson Navigation’s 10-day service from China to the Matson-SSA Marine terminal in Long Beach is the original service featuring rapid transit times and expedited cargo handling at the terminals. Whether other carriers follow suit in the coming year will be determined by market demand and carriers’ ability to sustain premium ocean and terminal performance for a premium price.

Although US ports and terminal operators have no control over when vessels leave Asia, better gathering and dissemination of shipment information at least will give BCOs real-time data upon which they can base the segments of the supply chain where they do have control. The Port of Los Angeles and GE Transportation in 2017 introduced the Port Optimizer, which is intended to provide a single, secure portal through which BCOs, NVOs, ocean lines, terminal operators, freight forwarders, truckers, railroads, and equipment providers share information on shipments beginning when the vessels leave foreign ports 10 to 14 days before arriving in the US. The Port Optimizer has been rolled out at all six marine terminals in Los Angeles and three of the six terminals in Long Beach.

For example, when vessel space was especially tight during the peak season, NVOs were often able to secure space from carriers with which some importers did not have an established relationship, he said. NVOs now control 44.6 percent of US imports from Asia, compared with 36.8 percent in 2013, according to PIERS.

When the formal service contracting season begins in March, carriers and their customers certainly will be influenced by the economic forces in play, including supply and demand at the moment and what is projected for peak-season 2019. Initial global projections based on IHS Markit data indicate a favorable forecast for carriers, with global capacity forecast to increase 2.6 percent while demand will increase 5.5 percent.

The experience of recent years, however, has shown that reliance on early projections can be dangerous if what now seems like the inevitable unexpected disturbance occurs. “We should learn from the disruptions of 2018,” Klage said. “Be cautious.”