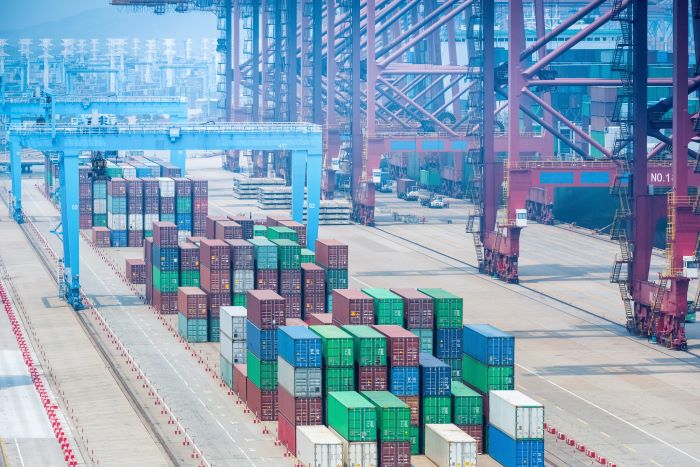 Throughput at the top 20 Chinese ports grew 4.1 percent in the first seven months of the year, compared with a 4.9 percent expansion in the same period a year ago. Photo credit: Shutterstock.com.

The United States-China trade war escalated further Friday, with President Donald Trump announcing an increase in existing and future tariffs on Chinese imports after Beijing slapped retaliatory tariffs on $75 billion of US goods.

Trump, via Twitter, said late Friday that $250 billion of Chinese goods currently being taxed at 25 percent would be hit with a 30 percent levy as of Oct. 1. Additionally, a 10 percent tariff on an additional $300 billion of imports due to go into effect Sept. 1 would be raised to 15 percent.

“Sadly, past administrations have allowed China to get so far ahead of fair and balanced trade that it has become a great burden to the American taxpayer,” Trump said. “As president, I can no longer allow this to happen! In the spirit of achieving fair trade, we must balance this very unfair trading relationship.”

It was not immediately clear if certain key products — such as laptop computers and other electronics — would face the higher 15 percent tariff from Sept. 1. Trump last week said the 10 percent tariff on electronics would be delayed until Dec. 15.

Earlier Friday, Trump took to Twitter to tell US companies to begin looking for alternatives to doing business with China

“We don’t need China and, frankly, would be far better off without them,” Trump tweeted. “The vast amounts of money made and stolen by China from the United States, year after year, for decades, will and must stop. Our great American companies are hereby ordered to immediately start looking for an alternative to China, including bringing your companies home and making your products in the USA.”

Trump said he would have further comment on China’s tariff move later Friday. But he called shifting away from trade with Beijing “a great opportunity for the United States.”

Chinese officials announced earlier in the day that China would levy additional tariffs of 5 percent or 10 percent on $75 billion worth of US exports to China — including soybeans and crude oil — starting Sept. 1.

China will also resume tariffs on its imports of US automobiles (25 percent) and automotive parts (5 percent) from Dec. 15.

Xinhua, the official Chinese news agency, said the tariffs announced by Beijing were “a forced response to US unilateralism and trade protectionism.” The US on Aug. 1 announced it would begin levying 10 percent tariffs from Sept. 1 on $300 billion of Chinese goods that were not already under tariff. Washington has since delayed implementing the tariff on certain key goods — such as electronics — until Dec. 15.

Tariffs previously imposed by China on US exports have had a withering impact. In the five months from January through May, containerized exports to China declined 23 percent from the same period last year, according to PIERS, a JOC.com sister company within IHS Markit. This year’s drop in exports to China came on top of an 18.3 percent decline in the same period in 2018 from 2017.

The eastbound effect has not been as dramatic, however, with US tariffs only cutting imports from China by 4.4% through July this year, compared with the same period a year ago, PIERS data showed.

Container trade growth through the largest Chinese ports is slowing, meanwhile, reflecting easing global economic growth and the tariff tit-for-tat with the US.

Total throughput at the top 20 Chinese ports grew 4.1 percent in the first seven months of the year, compared with a 4.9 percent expansion in the same period a year ago, according to data provided by the Shanghai Shipping Exchange.

The slowing growth comes amid the heightened trade tensions between the US and China and can be directly linked to 10 percent tariffs levied by the US on $200 billion of Chinese imports last September — and the threat to increase those tariffs to 25 percent at the beginning of 2019. The increase, after several delays, went into effect in May.

The tariff war is causing US exports to Asia to increasingly find alternative landing spots to China. Chinese imports as a percentage of total US exports to Asia fell to 30.8% in June, from 41.3% in February 2018, PIERS data showed.