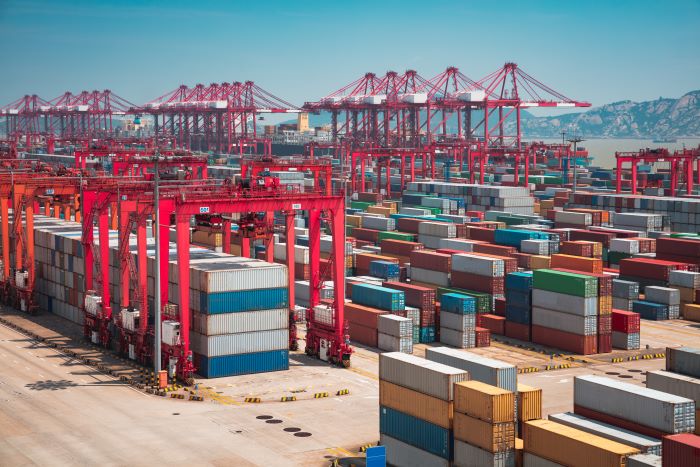 The US-China trade war, which shows no signs of letting up, is only one driver of the declining freight rates in the westbound Pacific. Photo credit: Shutterstock.com.

A 13 percent drop in the westbound trans-Pacific spot rate earlier this month in the face of punishing tariffs by China on US exports has carriers concerned that low vessel utilization and weak freight rates will only get worse in the weeks ahead.

Although the third quarter is usually the slowest period for exports, the US-China trade war could mute the anticipated recovery in the fourth quarter. However, the tariff war that is restricting trade flows is only one driver of the declining freight rates in the westbound Pacific. Environmental restrictions on scrap commodities throughout the region, the normal lull in agricultural exports in late summer and early autumn, and overcapacity caused by a new peak-season service and extra-loader vessels could put downward pressure on spot rates until exports pick up in November, carriers and exporters told JOC.com. Since service contracts for commodity exports take place at that time, contract rates could also come under pressure.

The spot rate on containerized exports from Los Angeles-Shanghai, a bellwether of the westbound trade, dropped from $494 per FEU on Aug. 1 to $429 per FEU on August 8 and remained at $429 on Aug. 15, according to the Shanghai Containerized Freight Index (SCFI) published under the JOC Shipping & Logistics Pricing Hub.

The drop in westbound freight rates, and unusually low vessel utilization rates in the trans-Pacific, “have everything to do with significantly less China cargo moving westbound,” said Ernie Kuo, vice president of sales and marketing at Pacific International Lines (USA).

Freight rates on containerized exports to Asia, which are dominated by low-value scrap recyclables and agricultural commodities, are always much lower than on the higher-value consumer merchandise the US imports from Asia, and especially China. Therefore, the week-over-week drop of $65 per FEU has a much greater percentage impact on export freight rates than a similar decline would have in the eastbound trans-Pacific.

Furthermore, the week-over-week spot rates going back to August 2018 had been quite stable. The rates varied up or down about $20 each week from a benchmark of $500 per FEU for the previous 50 weeks. The westbound spot rate in early August 2018 was $489 per FEU.

Even worse, the SCFI spot rate is an average for all containerized exports. The average is pushed up by refrigerated exports such as beef, pork, and chicken, and by chilled food products, which command higher freight rates because of the higher costs involved in maintaining the perishables during the extended transportation process. However, TEU of reefer products shipped to Asia represent a small share of total TEU in the westbound trade.

The spot rate on the dry commodities that generate the vast majority of the westbound shipments is extremely low today — as low as $100 per FEU from both the West and East coasts, carrier and shipper sources said.

From several decades of experience running the export division of OOCL, Ed Zaninelli, president of Griffin Creek Consulting, said the normal scenario in weak markets is that one line panics and lowers its rates, “and then everything else collapses.”

Unlike the eastbound trans-Pacific trades, which experience growing import volumes and high vessel utilization rates in July-October, the westbound trade each year is marked by the summer doldrums. Farmers have cleared out their silos of stored grain to make way for the new harvest, cotton shipments slow considerably, and scrap paper collections diminish with the schools closed for the season.

“The third quarter is always the worst,” said Lawrence Burns, senior vice president of trades and sales at Hyundai America Shipping Agency. In normal times, the largest-volume export commodities pick up in the fourth quarter and stay strong through the first quarter of the new year, he said.

This year will be more difficult than most, however. US exports to China of a major commodity — recyclables — have actually been declining for several years due to Beijing’s “Green Fence” policy of discouraging imports of adulterated scrap paper, plastics, and metals. China has raised its quality standards, imposed quotas, and even issued total bans on various categories of scrap imports, not only from the US, but from all countries.

China this year is using a mixture of tariffs, quality controls, and quotas to stifle or virtually stop the importation of different scrap products, said Joe Pickard, chief economist at the International Institute of Scrap Recycling Industries. The tariffs are broadly in the 25 percent range but are higher for some categories, he said, citing aluminum, which has a 50 percent tariff.

China’s tariffs are creating a chill on the entire exporting process, including the issuance of letters of credit to exporters, said Hayden Swofford, independent administrator of the Pacific Northwest Asia Shippers Association, which represents exporters of forest products. While US exporters find it more difficult to open letters of credit, China is rapidly shifting its sourcing to other countries. “Anything China can get from us, China can get somewhere else,” he said.

Soybean exporters, already priced out of the China market for their main product because of the tariffs, are now losing out in soybean meal for animal feed, said Mike Steenhoek, executive director of the Soybean Transportation Coalition. With its pig herd significantly reduced due to an outbreak of the African swine fever disease, soybean meal exports to China are also down, which has further decimated demand from US farmers, he said.

China was beginning to emerge as a growing market for specialty agricultural products such as identity-preserved grains and pulses such as peas and lentils, which are grown throughout the upper Midwest. However, “Pulses have been hit hard by the tariffs,” said Bruce Abbe, strategic adviser for trade and transportation to the Midwest Shippers Association.

Tariffs are having a real impact in terms of pricing, but also a psychological impact on farmers who are looking away from China and attempting to develop new markets. However, developing new markets “is not an overnight thing,” Abbe said.

Exporters of a variety of commodities have achieved varying degrees of success in developing new markets. The PIERS statistics show that for total US exports to Asia in January through May, exports increased 24.3 percent to South Korea, 11.6 percent to Japan, 11.6 percent to Taiwan, and 10.2 percent to Vietnam compared with the first five months of 2018.

However, Paul Bingham, director of transportation consulting at IHS Markit, the parent company of JOC.com, said these countries overall represent much smaller markets than China. “I suspect they have gotten the low-hanging fruit in those markets. How long can this be sustained?” he said.

Bingham noted that growing economic prosperity of these and other countries in Asia depend heavily upon their trade with China, but as China’s economy weakens, partly due to the trade war, those countries will not be able to continue increasing their purchases of US commodities. Bingham described the ongoing US-China tariff war and the economic impact it is having throughout Asia as “trade destruction.”

“It’s not being helped by the fact that the dollar is strong,” which makes US products and commodities more costly, he said.

Even for products that were gaining momentum in Asia, such as beef and pork, the immediate future is not as bright as it would have been without China’s tariffs and the decision by the Trump administration to pull the US out of regional trade agreements. The US Meat Export Federation (USMEF), in a press release, noted that beef and pork exports to the world increased in both volume and value in June. Pork exports increased 11 percent year over year in volume, while beef exports increased 3 percent.

Despite China’s retaliatory tariffs, US pork exports there surged 123 percent year over year due to the African swine fever epidemic. China is the world’s largest consumer of pork. However, US pork is now assessed at 62 percent tariffs by China, so other producing nations, which face only a 12 percent tariff, have an advantage on price in what will be a growing market while China rebuilds its herd, said Joe Schuele, vice president of communications at USMEF.

US beef only recently entered the Chinese market due to restrictions being lifted there, but in the more mature market of Japan, US producers are at a price disadvantage because Japan is a member of the Comprehensive and Progressive Agreement for Trans-Pacific Partnership, and the US is not. Also, Japan has a trade agreement with the European Union which reduced its tariffs on beef imports from that region. The meat federation noted that even though Japan is still the number one market for US beef exports, US producers face “a significant rate disadvantage” because of the tariffs they are assessed. US beef exports to Japan were down 4 percent in June and 1 percent in the first half year over year, the USMEF said.

Given all the current disadvantages US exporters face due to tariffs and the US absence from regional trade agreements, carriers are cautious about predicting a robust rebound in US exports to Asia this autumn when the 2019 harvest is completed and other export commodities increase. While exports are bound to rise later this year and into 2020, they may not be as strong as they were in past years. “I don’t see the demand equation helping us,” Burns said.