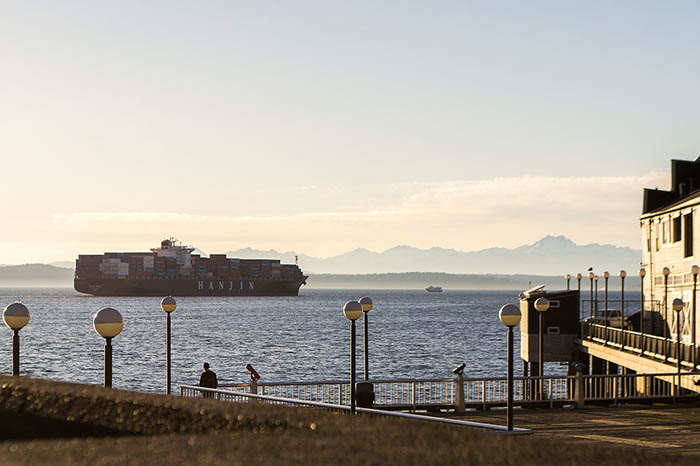 Trans-Pacific spot rates will rise in the immediate aftermath of Hanjin Shipping's bankruptcy, but how the rate will trend in the longer-term is murkier.

Trans-Pacific inbound container rates are soaring in the aftermath of this week’s collapse of Hanjin Shipping, but it’s unclear how high they’ll go over the next few months as new capacity gets deployed to handle the orphaned Hanjin Shipping cargo.

Prior to the Thursday bankruptcy of the world’s seventh-largest container line, which brought its worldwide operations to a sudden standstill on Wednesday, trans-Pacific carriers were planning to implement a Sept. 1 general rate increase of $600 per forty-foot-equivalent unit from Asia to the West Coast. But whereas in normal times the success of such a GRI would have been questionable at best, this time sources say it will without question take effect and that rates are likely to rise even further in coming weeks.

The Sept. 1 increase will take spot rates up to $1,700 per FEU, up from $1,100 or 54 percent prior to the increase. On top of that, carriers have announced a $600 peak season surcharge to take effect Sept. 15, which also stands a good chance of taking effect, and an Oct. 1 GRI on top of that. At the very least, sources say, the Sept. 1 GRI and PSS stand a good chance of taking effect, taking trans-Pacific spot rates to the West Coast up to $2,400 and East Coast rates up to $3,000 per FEU.

The Hanjin collapse “is definitely giving the carriers the confidence to stick with the GRI and understandably so; they are inundated with cargo requests,” said Kurt McElroy, executive vice president of APEX, one of the largest non-vessel-operating common carriers in the trans-Pacific eastbound market.

Others believe the same thing. “The complete halt in Hanjin Shipping's operations is expected to cause serious capacity issues in the market. In light of this, we anticipate a strong general rate increase as of Sept. 1, 2016 and continued rate increases for the remainder of 2016,” OEC, another larger trans-Pacific NVO, said in an Aug. 31 customer advisory.

Part of what is giving liners confidence is an already tight trans-Pacific market that sources say is at 90 percent utilization. The evidence for the tightness is clear from recent spot rates: spot rates to the U.S. West Coast have climbed from $753 per FEU in late June to $1,153 in the latest reading from the Shanghai Shipping Exchange's Shanghai Containerized Freight Index, a 53 percent increase.

Hanjin was carrying roughly 10,500 to 12,000 FEUs per week in the eastbound trans-Pacific, all of which will now have to find another home. Fellow Korean carrier Hyundai Merchant Marine plans to deploy 13 additional ships to handle the orphaned cargo, the Wall Street Journal reported and other carriers are said to be planning so called “extra-loaders” in coming weeks — ships deployed in addition to scheduled services.

“We’re already seeing indications that carriers are going to do extra loaders,” McElroy said, “Anyone who has access to available tonnage is undoubtedly going to evaluate the merits of extra loaders, and I think there is certainly enough demand for that capacity even at the higher spot rates.”

How the spot rate market plays out will depend on how quickly it adjusts to the shock of this week’s sudden withdrawal of the Hanjin capacity. There is no shortage of idled capacity that could quickly fill the void. Maritime analyst Alphaliner reported this week that the idle fleet is currently over 1 million TEUs and extra-loaders are to be expected in coming weeks. And with rates at higher levels carriers, can be expected to move quickly to get higher valued cargo onto their ships. This is especially so given the historically rock bottom rates, some as low as $700 per FEU, that cargo under annual service contracts is currently moving under.

McElroy said beneficial cargo owners are already knocking on the doors of NVOs like APEX seeking extra capacity. He said it’s likely that given the low service contract rates, carriers are likely to enforce limits on minimum quantity commitments, as they typically do in periods of high demand. For example if a shipper has a 1,000-FEU MQC contract, a carrier will allow only about 20 containers per week to be shipped at the contract rates, and will demand higher rates more aligned with current spot rates for any incremental volumes a BCO may need to ship.

The fate of an announced Oct. 1, $1,000 GRI is harder to determine at this point. If the Sept. 1 GRI and Sept. 15 PSS were to hold and then the Oct. 1 GRI was slapped on top of that, West Coast rates would stand at $3,400 per FEU, which would represent a huge increase versus current levels and a significant upward shift in the rate structure. Would the Hanjin withdrawal and the peak season be enough to support those types of rates?

Even if they weren't, the current September increases look favorable, at least for carriers. “I definitely think a $2,400 rate is quite feasible for September given the situation,” McElroy said. Come Oct. 1, it is going to look different. There could be a decline in volumes coming and capacity coming in, possibly through taking idle tonnage for the displaced Hanjin tonnage. But right now I think that September is definitely going to see higher rates and (the carriers will) keep those rate levels at least through September and well into October as well.”