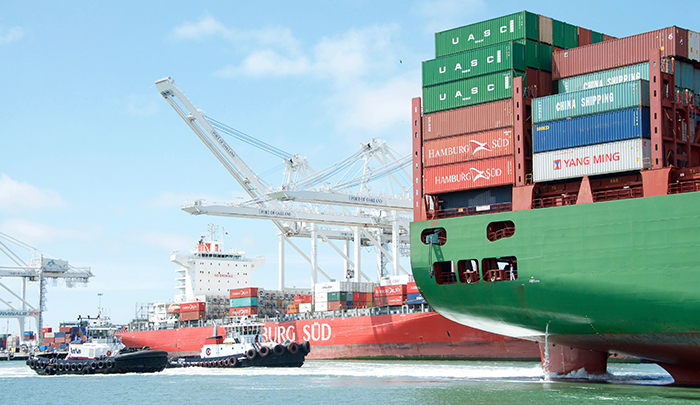 Ships sailing the trans-Pacific have been full so far this year.

Carriers in the eastbound Pacific maintained the strong freight rates that have marked the pre-Chinese New Year period over the past month, but with factories in Asia closing down for a week or longer, spot rates to the West and East coasts will likely drop off beginning next week. 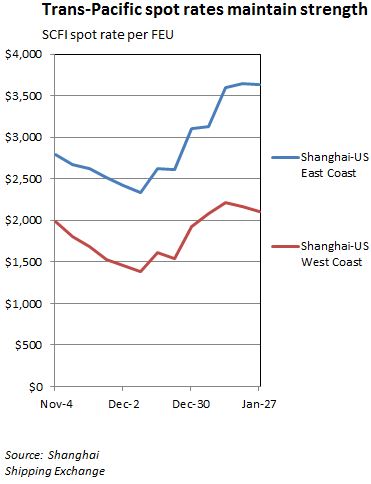 The average spot rate for shipping a 40-foot-equivalent unit from Shanghai to the East Coast this week was $3,637, basically the same as last week. The spot rate to the West Coast was $2,106 per 40-foot equivalent unit container, down 3 percent from last week, according to the Shanghai Containerized Freight Index that is published on JOC.com’s Market Data Hub.

The month-long bull run in the spot market should help carriers’ ability to negotiate more favorable contract rates with retailers and beneficial cargo owners this spring. The annual service contracts negotiated with steady customers willing to commit large volumes of cargo normally run on a May 1 to April 30 cycle. This year’s service contract negotiations will be more complex than usual, though, because new global vessel-sharing alliances are scheduled to begin operations on April 1.

The annual Chinese New Year celebrations in Asia this year begin on Saturday. Many factories will close for one to two weeks. As per usual, vessels begin to fill up in the month leading up to Chinese New Year and carriers are able to charge higher rates on shipments to the United States.

Vessel utilization rates have been elevated all month. According to the most recent numbers provided by the Transpacific Stabilization Agreement, a discussion and research group of the major carriers in the trade, in the week of Jan. 8, vessels operating to the Pacific Northwest were at 98.2 percent of capacity. Utilization rates to Los Angeles-Long Beach were 98.5 percent, 98.5 to the East Coast via the Panama Canal, and 99.7 percent to the East Coast via the Suez Canal. 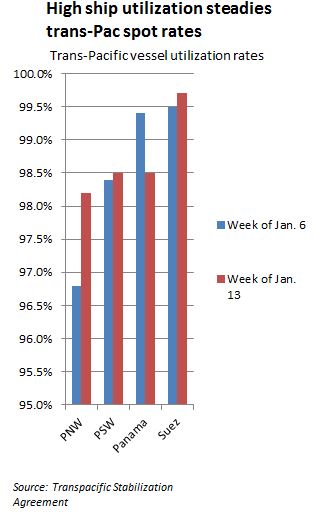 Spot rates are expected to decline sharply beginning next week and continuing through February during the traditional slack shipping period. Signs are emerging of just how severe the decline could be. Mediterranean Shipping Co.’s proposed general rate increase for Feb. 1 puts the West Coast rate $100 lower than it was in the week of Jan. 2, and the East Coast rate will be $50 less.

Carriers operate larger ships and more weekly services to the West Coast. The excess capacity usually means that spot rates increase more slowly during peak periods and decrease more rapidly during slack months. There is less volatility on all-water services to the East Coast, where supply and demand are more evenly matched.

Spot rates since the fall have been noticeably higher than last year. The Hanjin Shipping bankruptcy filing on Aug. 31, which removed about 7 percent of total vessel capacity in the Pacific, shook up the trade and made cargo interests more accepting of rate increases. The spot rate this week to the East Coast was 47 percent higher than the same week last year, and the West Coast was 52 percent higher.