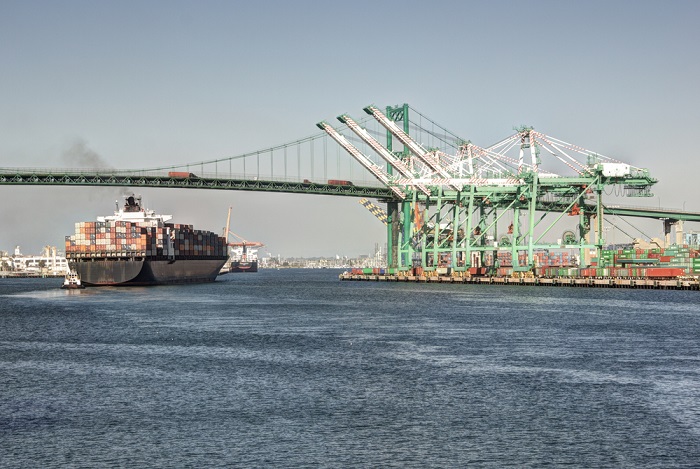 This week’s spot rate from Shanghai to the East Coast was $3,294 per FEU, down 0.3 percent from last week. The West Coast rate was $2,587 per FEU, the same as last week, according to the Shanghai Containerized Freight Index that is published under the JOC Shipping & Logistics Pricing Hub. (Above: The Port of Los Angeles.) Photo credit: Shutterstock.com.

Spot rates in the eastbound Pacific remained at five-year highs this week for the 13th straight week ahead of expectations of a late-year US import surge as seen in the deployment of extra-loaders.

Expecting an atypical surge of cargo driven by US importers trying to get goods in before tariffs on some imports from China jump from 10 percent to 25 percent starting Jan. 1, there will be four extra-loaders deployed from China to the Los-Angeles-Long Beach port complex through November. US containerized imports through August are up 4.8 percent, according to PIERS, a JOC.com sister product within IHS Markit. The Global Port Tracker, published monthly by the National Retail Federation and Hackett Associates, expects strong retail sales this holiday season to keep volumes high into November, although a sharp drop off is predicted after Jan. 1.

In addition, attention has shifted to the West Coast in recent weeks as evidenced by increasing spot rates to those ports, while East Coast rates have flattened. This means the eastbound Pacific is following normal seasonal trends, with East Coast volumes being strongest in late summer, and West Coast volumes experiencing a surge in higher-value, time-sensitive holiday season merchandise in autumn.

This week’s spot rate from Shanghai to the East Coast was $3,294 per FEU, down 0.3 percent from last week. The West Coast rate was $2,587 per FEU, the same as last week, according to the Shanghai Containerized Freight Index (SCFI) that is published under the JOC Shipping & Logistics Pricing Hub. Spot rates surpassed $3,000 per FEU to the East Coast and $2,000 to the West Coast on Aug. 3 and have remained above those benchmark levels — the first time since 2013 that rates experienced such a run.

Normally shipments of lower-cost holiday season merchandise are strongest to the East Coast in late summer, while the higher-value, time-sensitive shipments move closer to the Black Friday start of the Christmas-buying season. That is the case again this year, as evidenced by the spread between the East and West coast rates. The spread most of the year is about $1,000 per FEU. The spread dropped to $717 per FEU on Oct. 19, and was $707 this week, which means that due to stronger bookings to the West Coast, carriers were able to raise their rates, while rates to the East Coast were flat, a sign that capacity to the East Coast is not as tight.

Carriers believe they will continue to have pricing power into November. According to the Freightos Baltic Index, some carriers have prefiled general rate increases (GRIs) for Nov. 1 or for Nov. 15. Whether or not the GRIs will actually be implemented will be determined by vessel utilization factors when the bookings are made in Asia.

Spot rates have been on an unusually long high this summer and autumn, due in part to importers front-loading their shipments to get ahead of the 10 percent Trump administration tariffs on China, but more so because carriers reduced capacity entering the peak season. Carriers, individually and through their vessel-sharing alliances, suspended three weekly strings to the West Coast, reducing total capacity by about 6 percent, and one to the East Coast, reducing weekly capacity in that lane by about 1.3 percent.

Early November usually marks the end of the peak-shipping season. Merchandise must have landed by then in order to be on the store shelves by the day after Thanksgiving for the Black Friday sales. Imports will then drop off, and spot rates will also drop, until late December or early January. Retailers and manufacturers then ramp up imports in January and into February until factories in Asia shut down for a week or two during the annual Chinese New Year holiday. Chinese New Year falls on Feb. 5 this coming year.

However, the current environment is not following normal seasonal trends due to the tariffs, which are scheduled to increase to 25 percent on imports from China on Jan. 1, 2019. Retailers and manufacturers are attempting to determine if they should ship spring merchandise in November and December to avoid the tariff increase. However, they would have to pay higher-than-usual spot rates and would incur additional inventory carrying costs. If they wait until January, spot rates are expected to drop, possibly precipitously, and their inventory carrying costs would be lower. The strength of early holiday retail sales, which will begin right after Halloween, will be a factor in their decision when to ship the spring merchandise.