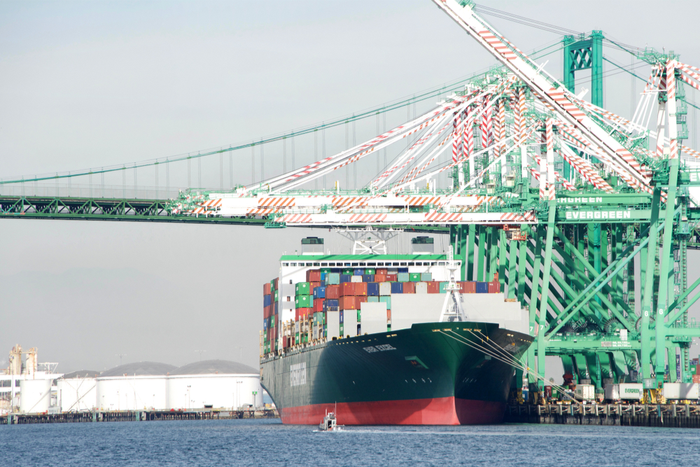 If Trump goes through with his newest threat, Alphaliner warns eastbound trans-Pacific volume will fall at least 8 percent in 2019 after rising 8.3 percent in 2018. Photo credit: Shutterstock.com.

The sharp and sudden escalation of trade tensions between the United States and China, after a deal seemed imminent, casts a shadow on trans-Pacific containerized supply chains, elevating risk for carriers after exhibiting newfound strength in recently concluded service contracting.

Before May 5, when President Donald Trump announced that tariffs on $200 billion of Chinese imports would rise from 10 to 25 percent, carriers were relatively sanguine about 2019 and for good reasons. The contract season was well-timed for carriers, coming in the aftermath of the front-loading of volumes and resulting market tightness ahead of threatened Dec. 31 tariffs on China.

Hapag-Lloyd’s trans-Pacific rates were up 7 percent in the first quarter, the highest increase among any of the regions in which it operates, according to its first-quarter earnings report issued on May 9.

That rare instance of trade policy impacting logistics, plus the continuing strong US economy this year, kept the trans-Pacific market relatively tight in the first quarter, raising the specter for shippers that capacity could remain tight deeper into 2019 and contributing to what amounted to a minor victory for carriers in the just-completed negotiations.

It's possible some early effects of consolidation in driving solidarity among carriers enabled them to secure approximately $200 to $300 per container increases in annual contracts and importantly helped them lock in guarantees on reimbursement from shippers for the higher anticipated costs of low-sulfur fuel as of Jan. 1, 2020, when the International Maritime Organization’s stronger ban on sulfur emissions takes effect.

Hapag-Lloyd in its first-quarter earnings report noted that global supply growth is estimated by Drewry to be 3.1 percent while global demand as forecast by IHS Markit is 4.7 percent, thus, at least on a global level, this points to tightening capacity. Also citing Transmodal data from April, Hapag-Lloyd noted that the container ship order book stands at just 11 percent of existing capacity, down from 61 percent in 2007 and an average figure of 16 percent over the past five years.

Speaking of the first quarter, Hapag-Lloyd CEO Rolf Habben-Jansen said, “We achieved a good result and got the year off to a very decent start.”

Looking further down the road in 2019, another factor in carriers’ favor, which surely will be to shippers’ disadvantage, will be a large number of ships temporarily removed from service for installation of scrubbers, which will allow the ships to continue burning high-sulfur bunker fuel and still comply with the IMO 2020 rule.

But the US tariffs and the swift retaliation by China is a new dark cloud. The tariffs seem very likely to impact trade and economic growth. IHS Markit chief economist Nariman Behravesh said, “We estimate that the impact of the announced tariffs by the US and China will cut global growth by 0.2 to 0.3 percentage points. If the threatened tariffs [25 percent on an additional $300 billion in Chinese imports] are also implemented, then these estimates would be doubled.

“The trade impacts are typically bigger. I would estimate a 0.5 percentage point hit to growth from the announced tariffs and double that if the threats are implemented,” he said.

Because of the trade war, container volume growth this year could come in as little as 2 percent, according to London-based ship broker Braemar ACM, as quoted by The Wall Street Journal.

If Trump goes through with his newest threat, Alphaliner warns eastbound trans-Pacific volume will fall at least 8 percent in 2019 after rising 8.3 percent in 2018. Increased sourcing from other Asian countries won’t make up for the shortfall, the maritime analyst said in its weekly newsletter. The newest tariff shock hits the trans-Pacific before the traditional summer peak season and threatens carriers with downward pressure on spot rates.

The escalating trade war comes on the heels of 2019 global trade estimates already downgraded. Hapag-Lloyd noted that the International Monetary Fund forecasts that global trade, not just container trade, will expand 3.4 percent in 2019, a forecast down from its 4 percent growth expectation in January.

IHS Markit, parent of JOC.com, observed a “mild strengthening of momentum” in global growth in the first quarter, but notes, “The downside risks have once again risen … in particular, the raising of US tariffs on Chinese imports on May 10 — and Chinese retaliation [announced May 13] — could lead to a damaging upward spiral of trade hostilities and seriously hurt growth.”

From a carrier standpoint, further risks remain. The IMO 2020 rule, despite the benefits in temporary capacity withdrawals, will be a huge and abrupt change to the market overall, and the success carriers had ensuring reimbursement for higher costs in the trans-Pacific only covers 13 percent of global volumes and doesn’t guarantee similar success in other trade lanes.

With volume pressures mounting and a minimum $10 billion low-sulfur fuel bill hanging over the industry, 2019 is a year that will test carriers' resolve.