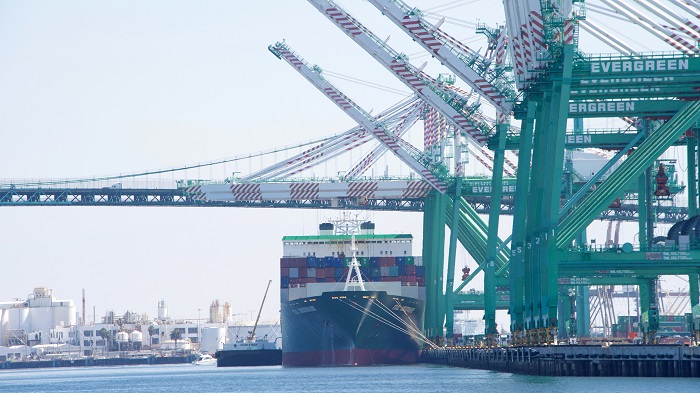 Trans-Pacific importers should expect an injection of 8 to 9 percent of eastbound capacity, outpacing demand forecasts of about 5 to 6 percent, even as the 19 percent week-to-week drop in spot rates following Lunar New Year suggests carriers are already struggling to manage capacity.

“The planned capacity increases will have an impact on the ongoing rate negotiations for the new annual trans-Pacific service contracts from 1 May, and spot freight rates are expected to come under pressure as vessel utilization falls,” Alphaliner stated in its weekly newsletter.

The increased capacity will result from new services planned by APL and SM Line, the successor to Hanjin Shipping, which went bankrupt in 2016, as well as vessel upgrades by the global carrier alliances. Those alliances will take possession of large new builds in the coming months. The ships up to 22,000 TEU capacity will enter service in the Asia-Europe trades, but they will trigger a cascading effect of vessels of 10,000 to 15,000 TEU capacity, some of which will end up in trades from Asia to the US West and East coasts, Alphaliner stated.

Growth in imports from Asia this year is actually projected to exceed last year’s increase of 4.4 percent, according to Alphaliner. While that is good news for carriers that will begin service contract negotiations this month with their largest customers, with a May 1 effective date, the planned increase in total capacity is expected to blunt carrier negotiating power.

New services already announced for this year include APL’s planned launch in July of the weekly China-Los Angeles “Eagle Express X” with vessels up to 2,000 TEU capacity for beneficial cargo owners (BCOs) who seek expedited service. The transit time of 11 days from Shanghai to Los Angeles will be the second fastest in the trans-Pacific after Matson’s 10-day service.

APL sees a market among BCOs that want preferred treatment in Asia and the United States. The “X factor” includes certainty of equipment and space at direct Asian load ports, guaranteed chassis in Los Angeles, and swift cargo discharge with next-day availability at an off-dock facility. The off-dock facility will house imports for local destinations and will provide round-the-clock availability for pick up. Jesper Stenbak, APL’s senior vice president, trans-Pacific trade, said the EXX service will be operated outside of the Ocean Alliance, of which APL is a member.

Hyundai Merchant Marine has been offering a premium service since May 2017 to customers on its West Coast services. HMM announced last month that 10,000 TEU had moved on the premium services by the end of January. The services offer reliable cargo loading and space guarantees in Asia and priority unloading at West Coast ports. Priority unloading can shorten container delivery time to customers by two to three days, HMM stated. Freight rates on the premium services are 10 to 20 percent higher compared with standard service, the carrier stated.

SM Line, which launched an Asia-Long Beach service last April with vessels of 6,655 TEU capacity, will introduce its Asia-Pacific Northwest service this May. The service — linking Chinese, South Korean, and Japanese ports with Vancouver and Seattle — will operate vessels of 4,000 to 4,600 TEU capacity. Alphaliner stated that “SM Line appears to have postponed its plans to launch a separate all-water service connecting Asia to the US East Coast this year.”

THE Alliance of NYK Line, “K” Line, MOL, Hapag-Lloyd, and Yang Ming has been upsizing its Pacific Northwest 3 service to vessels of 13,000 TEU capacity. Alphaliner said THE Alliance is expected to upsize its East Coast all-water (EC 4) service from 8,000 TEU to 13,000 TEU vessels.

The 2M Alliance of Maersk Line and Mediterranean Shipping Co. has not yet announced vessel upsizing, but Alphaliner said the 2M will have the option to deploy vessels that will come from the shipyards this year of 10,000 to 15,000 TEU capacity, as well as 13,000 to 15,000 TEU vessels that could be cascaded from the Asia-Europe trade as new buildings of 18,000 to 22,000 TEU capacity enter that trade lane. Through its strategic partnership with the 2M, HMM has space-sharing agreements with Maersk and MSC.

BCOs, carriers, and ports see two messages coming from the increased capacity in the North American trades. When ship sizes take a quantum leap in capacity, terminal operations can be severely stressed, with accompanying congestion, an occasional need to hold vessels at anchor for several days while the terminal operator clears its container yard from the previous vessel arrival, and a shortage of rail cars, power, and crew.

Service contract rates for the contracting year that began on May 1, 2017, were about $1,200 to $1,400 per FEU to the West Coast and $2,300 to $2,400 to the East Coast. Those contracts were negotiated when spot rates were still fairly strong due to overall uncertainty in the trade following the Hanjin bankruptcy on Aug. 31, 2016.

Increased capacity also puts downward pressure on spot rates as well as service contract rates. Spot rates softened throughout the summer and autumn of 2017, however. Carriers in the fourth quarter of 2017 were charging the lowest spot rates since 2012, according to Alan Murphy, partner and CEO at SeaIntel Maritime Intelligence. By February, in what should have been a month of increasing spot rates before the Lunar New Year, the West Coast spot rate was $1,486 per FEU and the East Coast rate was $2,775 per FEU, both rates down about 20 percent from February 2017, Murphy said.

While further decline in the spot rates from Asia to both US coasts is anticipated in the coming weeks during the annual slack winter-spring season, the low starting point for spot rates during the 2017 peak shipping season and pre-Lunar New Year period will test carriers’ effort to increase rates as they launch service contract negotiations this month.

On the other hand, the rapid consolidation of the liner industry over the past two years from 20 global carriers to 10 later this year, and the growing power of the three carrier alliances, could indicate that service contract rates have bottomed out. Carriers this year, and going forward, have the tools they need to exert pricing discipline and prevent another significant drop in rates such as the one that occurred in 2016 before the Hanjin bankruptcy, according to David Arsenault, former president of the Americas at HMM and now chief strategy officer at Direct ChassisLink.