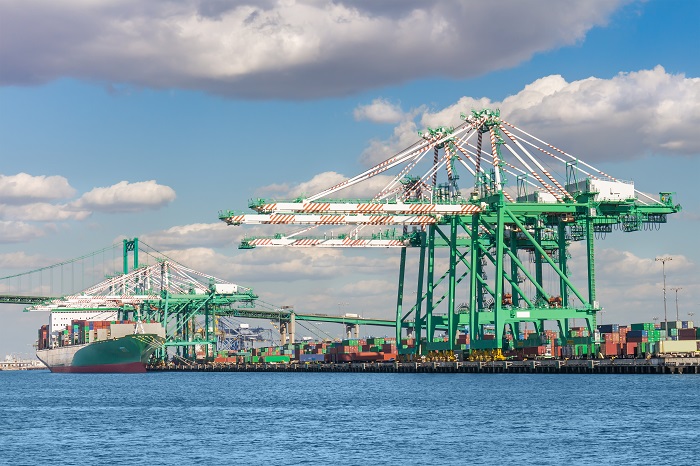 Spot rates in the eastbound Pacific this week fell below the psychologically important levels of $1,000 per FEU to the West Coast and $2,000 per FEU to the East Coast despite relatively strong imports, boding poorly for carriers’ ability to manage capacity when an injection looms.

Capacity in the eastbound Pacific this year is projected to increase 8 to 9 percent, compared with a projected increase in demand of 5 to 6 percent, according to Alphaliner. When spot rates in March experience a rapid decline, just as carriers begin service contract negotiations with their largest customers, the trend in spot rates can bleed into contract negotiations. At the same time, shippers are paying more for intermodal rail and particularly drayage and over-the-road trucking services, with some container lines resisting their exposure to store-door contracts.

Further, statistics releasd Wednesday confirm the above. The Port of Oakland announced that containerized import volume jumped 14.9 percent if February to 73,666 TEU — the highest February total in the port's 91-year history. Export volume increased 1.8 percent. Total volume, including empty boxes, rose 7.6 percent to 188,175 in February. The port noted that continuing strength in US consumer spending helped drive its import business.

Prices always decline in the weeks following the Lunar New Year when many factories in Asia close for the annual celebration. Since it takes several weeks for factories to return to full production, import volumes may not increase noticeably until April, the two cargo consolidators who requested anonymity told JOC.com

Nevertheless, spot rates this year are the lowest since 2016, when the global liner trades hit bottom and Hanjin Shipping filed for bankruptcy protection. Last week’s West Coast rate was down 19.7 percent from the same week in 2017 and the East Coast rate was 24.5 percent lower. The SCFI spot rates for this week will be published on Friday, and they are expected to be down further.

“After last year’s Lunar New Year, prices did more than drop, they collapsed. There are signs that could happen again,”said Zvi Schreiber, CEO of Freightos. Schreiber noted that carriers in the coming months are scheduled to take delivery of dozens of large new vessels, with about 80 percent of the vessels due to be delivered by July. This development supports the observation that carriers are struggling to manage capacity because imports so far this year have been up. Los Angeles, the largest US container port, on Tuesday reported a 28 percent increase in imports in February compared with February 2017. Long Beach, the second-largest container port, reported a 37 percent surge in imports year over year.

The problem for carriers is on the supply side. SeaIntel Maritime Analysis reported in January that leading up to Lunar New Year on Feb. 16 carriers had canceled only 6.2 percent of their weekly services, compared with 14.7 percent “blank sailings” in 2017.

Importers in recent years have been spreading their shipments out more evenly throughout the year, diminishing the sharp peaks and valleys that used to occur. According to PIERS, a sister product of JOC.com, imports last year during the slowest month of the year following Chinese New Year were 17.4 percent lower than the peak month of that cycle, August 2016. The gap in the slow month of 2016 compared with the previous August was 22.2 percent, and in 2015, the gap from the peak month was 25.2 percent.

If carriers in the coming months can get a grip on capacity, they could stop the rapid erosion of freight rates because imports are expected to continue growing in the coming months after a post-Lunar New Year decline this month. Commenting on Long Beach’s record volume in February, executive director Mario Cordero said, “A month like this is now the new normal. We expect a lull in March as East Asian nations celebrate the Lunar New Year holiday, and then a rebound in April. We’re happy with our busy start to 2018.”