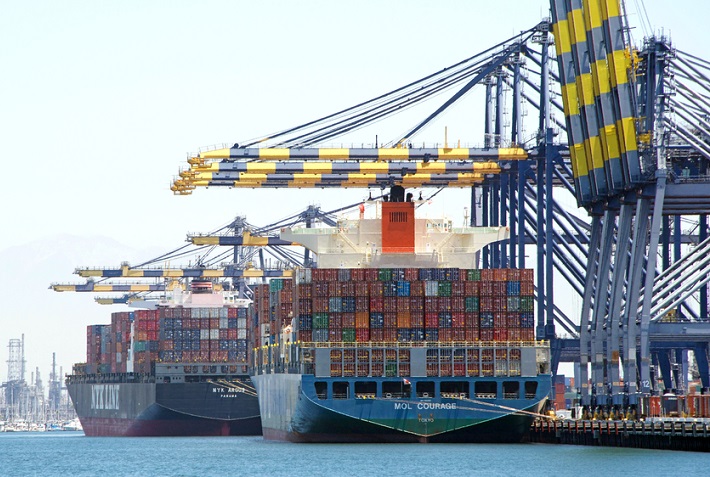 Word came late Saturday that China President Xi and President Trump at the G20 summit had agreed to a 90-day truce in which the US would not impose higher tariffs on Jan. 1 as threatened. In exchange, the Trump administration said China has agreed to import a "very substantial" amount of US agriculture products and other goods, to decrease the trade imbalance between the two countries. (Above: The Port of Los Angeles.) Photo credit: Shutterstock.com.

The looming escalation of $200 billion of tariffs on Chinese imports to the United States from 10 percent to 25 percent has been paused for 90 days just as additional trans-Pacific capacity dampens spot rates that until two weeks ago were at record highs due to front-loading of US imports. But spring merchandise ahead of proposed Jan. 1 US tariffs on China could result in increased spot rates in the coming weeks.

Following a meeting with Chinese President Xi Jinping in Buenos Aires on Saturday at the G20 summit, President Trump agreed to a 90-day truce in which the US wouldn’t impose higher tariffs on Jan 1. as threatened. In exchange, the Trump administration said China has agreed to import a “very substantial” amount of US agriculture products and other goods to lessen the trade imbalance between the two countries.

The withdrawal of a threat that created chaos on the trans-Pacific —with US importers scrambling to get goods into the United States before the Jan 1 deadline but finding less slots due to a summer culling of capacity — comes as eastbound spot rates feel for the second straight week. So much spring merchandise will be front-loaded in December that both carriers and non-vessel operating common carriers (NVOs) expect volumes will soften in January.

The Global Port Tracker, published monthly by the National Retail Federation (NRF) and Hackett Associates, projects modest growth in early 2019, with US containerized imports in January projected to increase 2.8 percent over January 2018. Imports in February are projected to increase0.4 percent and in March 3.3 percent year over year. US imports in October were the highest of the year, totaling 2,165,351 TEU, up 6.4 percent over October 2017, according to PIERS, a JOC.com sister company within IHS Markit.

While there was some optimism the higher tariffs could be averted during the G20 meeting, retailers and manufacturers could not wait for the results before placing their shipping orders with plants in Asia. Transit times to the East Coast are about 30 days, and about 12 to 14 days to the West Coast, so most of the imports that will arrive in the US in the coming month have already been booked. As a result, Seroka said, December is shaping up to be another strong month in Los Angeles-Long Beach.

Spring merchandise is also being front-loaded

In this environment of front-loading, the spring shipments began entering the country while warehouses at major gateways were still processing outbound shipments of holiday merchandise. This unusual phenomenon has kept spot rates unusually high since August. In addition to the volatility in spot rates, carriers have filed for general rate increases (GRIs) and peak-season surcharges at least monthly. Some of the rate hikes stuck and others did not.

Carriers have publicly filed rate hikes of about $850 per FEU effective Dec. 1. Past experience with such announcements shows the entire amount is rarely achieved. Nevertheless, beneficial cargo owners (BCOs) and non-vessel-operating common carriers (NVOs), which have paid spot rates above $2,000 per FEU to the West Coast and $3,000 per FEU to the East Coast since early August, are saying enough is enough. “This is a very opportunistic approach to pricing. And now they want us to pay a peak-season surcharge in December?” said David Bennett, president of the Americas at Globe Express Services.

Larry Burns, senior vice president of trade and sales at Hyundai America Shipping Agency, said the extent of the drop-off and the exact timing is difficult to predict. Chinese New Year 2019 falls on Feb. 5. Factories will close for a week or two, so the pre-Chinese New Year month of January can be expected to be busier than February when imports from Asia will likely fall precipitously.

Bennett surmised that similar to what happened before Chinese New Year 2018, factories in Asia may shut down earlier and stay closed longer than usual if purchase orders in early 2019 are weak. That would translate to a longer, deeper post-Chinese New Year lull.